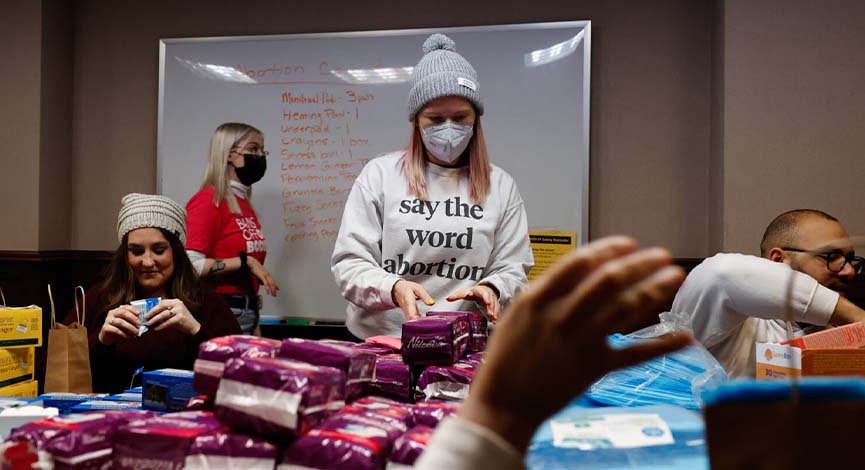 COLUMBUS, OH — JANUARY 21: Sarah Steenblock of Cincinnati joins supporters of Planned Parenthood Advocates of Ohio (PPAO) to assemble abortion care baskets before a rally outside the Ohio Statehouse to mark what would have been the 50th anniversary of Roe v. Wade. January 21, 2023, at the PPAO administrative offices downtown, in Columbus, Ohio. (Photo by Graham Stokes for Ohio Capital Journal)
ShareTweet

When the U.S. Supreme Court overturned Roe v Wade last June, it allowed states to ban abortion altogether without regard to the consequences for women’s health in its decision in Dobbs v Jackson Women’s Health. The states that have come closest to outright bans already had big problems with maternal and infant health, a new report says.

The report, by the Gender Equity Policy Institute, said that in 2021 maternal death rates in the 16 states it classified as having post-Dobbs abortion bans were 2.4 times higher than in the 22 states that it classified as being “supportive” of abortion rights.

It classified Ohio’s law — which bans the vast majority of abortions after about six weeks of pregnancy — as being one of those in 16 states that were “restrictive” of abortion rights. Maternal mortality — deaths during and shortly after pregnancy — was 1.7 times more likely in those states than in states with supportive abortion policies.

The Gender Equity Policy Institute used data from the Census Bureau and the Centers for Disease Control and Prevention to do its analysis. The findings were stark.

“For those who live in one of the 22 states which support reproductive freedom, the trends are largely positive,” it said. “The health and wellbeing of women and babies in these states outpaces that of those living in states which ban or restrict abortion care. This is true across nearly all indicators.”

In states that banned or restricted abortion post-Dobbs, pregnancy-related outcomes were far worse

“The situation is dramatically different, and more precarious, for the 59% of women and girls who live in the 29 states which ban or restrict abortion care and other reproductive health care,” the report said. “On nearly every measure, people in banned and restrictive states have worse outcomes than their counterparts in supportive states. Moreover, these states are less likely to enact policies, like paid parental leave, which have been shown to improve outcomes for new parents and babies.”

The analysis found that:

The connection between maternal and infant health and states that passed abortion bans or tight restrictions doesn’t seem to be straightforward. But many of those same states appear to be among those that place the least emphasis on women’s and children’s health.

For example, half of the states classified in the report as having abortion bans refused to expand Medicaid eligibility under the Affordable Care Act. That leaves millions of low-income women without coverage for birth control or access to care if they become pregnant.

In Ohio, strict abortion restrictions took effect almost immediately after the Supreme Court handed down the Dobbs ruling last summer. And almost right away, health care professionals reported health threats to women and girls as a result of the law, Senate Bill 23.

They include women with cancer who couldn’t get abortions in order to start chemotherapy and others whose pregnancies caused vomiting so severe that a 16-year-old lost 20 pounds and a mother of four couldn’t get off of the clinic floor, providers said in sworn affidavits. Other women’s fetuses had abnormalities so severe that their pregnancies couldn’t be successful. But under the Ohio law, they have to carry them to term anyway — even though that’s 14 times more likely to kill them than having an abortion.

As a general matter, the majority in the Dobbs decision and supporters of the Ohio law, have avoided discussing the health implications of severely restricting access to abortions.