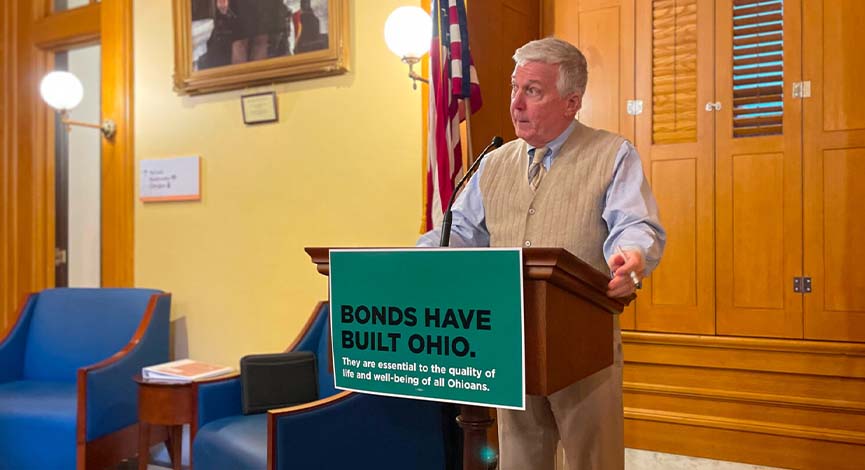 Former state representative and Columbus Dispatch editor Mike Curtin speaking at the Ohio statehouse. He opposes a move to raise the threshold for passing constitutional amendments, in part, because of its impact on future state bond issues. (photo by Nick Evans)
ShareTweet

Opponents of the Republican effort to make it harder to amend Ohio’s constitution added a new concern to the list Thursday. Already, critics have warned the changes are meant to stymie future abortion rights or redistricting initiatives, which the sponsor himself said in a letter to fellow Ohio House Republicans. Now, former state representative and Columbus Dispatch managing editor Mike Curtin is shining a light on what it could mean for state bond issues.

Curtin analyzed the period between 1980 and 2014 — the last time voters saw a state bond issue. Over that stretch, lawmakers put 18 borrowing measures on the ballot.

“Voters approved 12 and defeated and six. An overall success rate of two thirds,” Curtin explained. “If a 60% passage requirement had existed during this period, eight of the issues would have passed 10 would have failed.”

Curtin added two of the eight would’ve passed so narrowly it’s reasonable to assume they might not have succeeded.  The casualties include measures paying for economic development, schools, infrastructure and the environment.

Even then, he explained, getting majority support is difficult.

“We lost these types of programs outright in 1975, 1977 and 1980,” Curtin described. “If a 60% threshold had been in place over this time period, Ohio never would have passed any statewide ballot issue for housing assistance.”

Curtin next turned to Ohio’s Third Frontier, the pet project of former Gov. Bob Taft. The idea failed narrowly in 2003 but it passed in 2005. With just 54.1% support however, it too would’ve failed under the proposed supermajority requirement. Since it’s approval, Curtin explained, the program has helped foster the growth of Ohio’s tech industry. So much so that in 2010, 61.7% of voters agreed to extend it.

“One of the important lessons of Ohio’s ballot history is that sometimes a much needed program faces defeat before it finally wins approval, and later, even widespread acclaim,” Curtin argued. “If a 60% threshold had been required in previous decades, Ohio may never have been able to deliver many essential programs to citizens that we take for granted today.”

For another example, he cited 1999’s school construction bond. Lawmakers advanced the issue, again, under court order; voters had rejected a similar measure a year earlier. Despite facing no organized opposition whatsoever, the proposal barely cleared 60%.

“That underscores the fragility, the difficulty, of a 60% requirement,” Curtin said.

While he was in office, Curtin served on the constitutional modernization commission. He even served on a subcommittee that floated a higher amendment threshold of its own. Backers of the current 60% supermajority point to those subcommittee discussions to give credence to their effort.

That proposal, though, never gained the approval of the commission. And Curtin is quick to note it traded a 55% threshold on amendments for a much easier and effective statutory initiative process.

The current resolution, proposed by state Rep. Brian Stewart, R-Ashville, makes no changes to the statutory process, and actually sets up new hurdles in the amendment process. Stewart did not respond to requests for comment.

“When you do it as a rush job, you’re gonna get bad outcomes, and this is example number one of an unintended consequence,” Curtin said. “I will give the sponsors the benefit of the doubt that they didn’t even think one nanosecond about bond issues when they cobbled this rush job together.”

After a few years of federal largesse tied to the pandemic, Curtin argued funding is drying up quickly — putting more on states’ shoulders. “We’re going to be on our own for a period of time,” he said. But his chief concern isn’t the electoral outlook for some hypothetical future bond issue. It’s that he believes lawmakers are trying to undermine a more than century old right.

Asked whether carving bond issues out from the supermajority requirement would make a difference, Curtin said not really.

“It makes it less bad, but I’d still be adamantly opposed to it,” Curtin said, “because it still is an attempt to assassinate the initiative process in my view.”