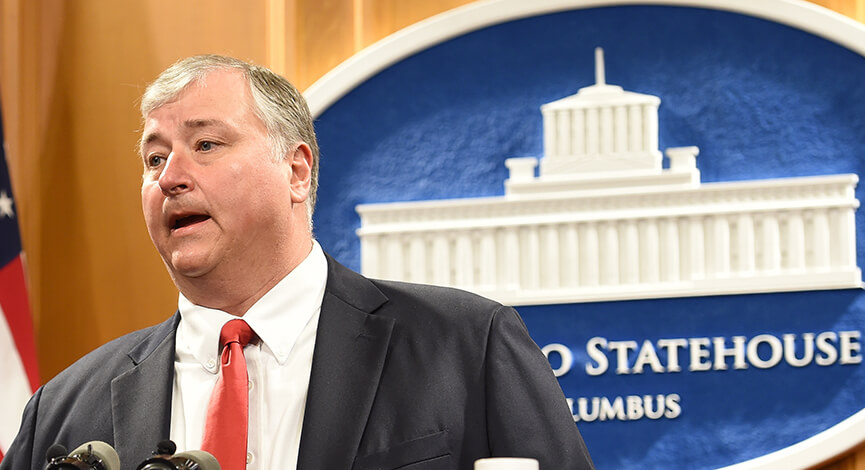 In late 2016, as Larry Householder was plotting his return to the Ohio House speakership, Akron-based FirstEnergy was drowning in losses from its uncompetitive nuclear and coal generators, the company’s treasurer testified Tuesday.

But just a month or so later, Householder and his associates flew on a private plane owned by FirstEnergy to Washington D.C. for a swanky series of dinners and drinks with top executives with the company, an FBI agent testified Tuesday. FirstEnergy CEO Chuck Jones joined them after flying in on a separate FirstEnergy flight, the agent, Blane Wetzel, said.

Within weeks, FirstEnergy money was flowing into Householder’s political machine.

Tuesday was the second day of the racketeering trial of Householder and lobbyist Matt Borges.

The men are accused of participating in a scheme to use $61 million — mostly in FirstEnergy money — to elect Republican lawmakers and make Householder speaker in 2019. In return, Householder rammed through a $1.3 billion bailout that mostly benefited FirstEnergy, the company admitted in a deferred prosecution agreement. Borges is accused of participating in a conspiracy to thwart an effort to repeal the bailout law — House Bill 6 — through a ballot initiative.

In opening statements Monday, federal prosecutors said that Householder corruptly engineered the scheme to put himself in a position of power and to pay himself more than $500,000. For their part, Householder’s lawyers said he raised money to build a coalition and achieve the speakership so that he could save jobs in Ohio.

Even before being elected to his old seat representing Perry County in November 2016, Householder was planning to regain the speaker’s gavel two years later, one of his lawyers said on Monday.

At the same time, FirstEnergy was struggling to deal with losses from its generation plants, company Treasurer Steven Staub testified Tuesday morning. The company made a strategic mistake by staying heavily invested in coal and nuclear plants as the fracking boom made power generated by natural gas much cheaper, he said.

He described how FirstEnergy Services, the generation arm of the company, hadn’t paid dividends in a decade and twice required cash infusions by parent company FirstEnergy. In 2013 and 2014 alone, FirstEnergy had to pump $2 billion into its generation business, Staub said.

The situation was so bad in late 2016 that the FirstEnergy board undertook an evaluation of what could be done to stop the bleeding. It considered selling off its coal-fired generators, but “you couldn’t give the coal plants away,” Staub said, and its nuclear generators were “just not marketable.”

Eventually, the board decided to send FirstEnergy into bankruptcy, Staub said.

But as FirstEnergy’s bottom line suffered, its top leadership joined Householder and his team on a lavish trip to D.C. between Jan. 18 and Jan. 21, 2017.

Assistant U.S. Attorney Emily Glatfelter walked Wetzel through a series of phone records and emails he gathered as part of his investigation. They included communications about a dinner for eight at the Charlie Palmer Steakhouse, where you can pay $80 for a Roseda bone-on Black Angus ribeye and $12 for “Crisp CP fries.” The party of eight dined the next two nights at The Palm, which offers an $83 pastrami-crusted bone-in ribeye and an $89 surf and turf.

Then the party returned to Ohio, again on one of FirstEnergy’s private jets.

About two weeks later, on Feb. 6, 2017 Householder associate Jeffery Longstreth opened a bank account for Generation Now, a 501(c)4 “dark money” group that didn’t have to disclose its donors, but could spend 49% of its money on political activities. The same day Longstreth emailed FirstEnergy Vice President Michael Dowling “wiring instructions” so the company could put money in the account, Wetzel testified.

Just a day later, Longstreth set up a bank account for Partners for Progress, another dark money group that Wetzel said was funded exclusively by FirstEnergy.

In its deferred prosecution agreement, FirstEnergy said that it funneled scores of millions into the operation through those entities to make Householder speaker and to beat back attempts to repeal the bailout he championed, House Bill 6. That legislation, signed by Gov. Mike DeWine, gave FirstEnergySolutions more than $1 billion in ratepayer money to bail out its nuclear plants and a separate, $20 million to $50 million annual subsidy to prop up its coal plants.

Staub, FirstEnergy’s treasurer, testified that a bailout was a huge windfall for the FirstEnergy bottom line.

“It was going to provide a fixed revenue stream for those companies,” he said, explaining that that would make them attractive to investors as FirstEnergy tried to spin them off.

Testimony will resume late Wednesday morning in the case, which could last as long as six weeks.