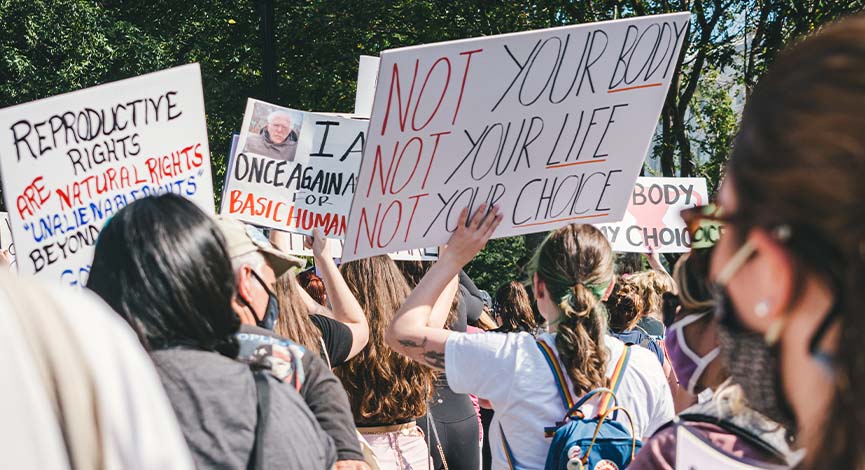 One of the town’s local well-known zealots, Martin Wishnatsky, had again handcuffed himself to an abortion clinic fence in protest of abortion law.

With a certain amount of weariness, editors at The Forum dispatched the greenest reporter they could find just to see if the story – this time around – changed.

I thought it was interesting, even exciting. However, I instantly detected the same weariness in the police officers who were on scene and were on a first-name basis with Wishnatsky.

As I recall, they found some bolt cutters and a ticket-book, and the protestor would be free but fined. I have to rely on my memory because the story had become so commonplace, not even the editors wanted another story about his antics when I arrived back at the office, breathless with excitement because it felt like a “real story.”

Now, 26 years later, I feel what they must be feeling – a sort of Groundhog’s Day approach to a story that never really seems to change; an unending cycle of protests, threats and hysteria surrounding a woman’s right to choose if and when she becomes pregnant.

For all those stories about protests, legislation and invoking God in an attempt to win the debate, I want to give Republicans credit for one thing: They managed to come up with a new way to frame the abortion debate.

Last week, in their first official acts narrowly controlling the U.S. House of Representatives, they decided to pass two anti-abortion measures. Not surprising.

However, one of the actions was a resolution – often referred to as lawmakers’ letters to Santa Claus – to condemn violence that has been committed against anti-abortion clinics.

When I first saw the news item, I did a double take. Certainly, it meant condemning the violence that has taken place in scores of doctors’ offices and abortion clinics.

It was as if the only protesters and threats that have been leveled in the heated, decades-long debate began and ended with recent incidences at anti-abortion centers.

In reality, the escalation of politics has unfortunately spilled over to target any kind of abortion clinic, pro- or anti-. No one deserves to be met with violence or threats. It’s wrong. Full stop.

I am glad they called out the violence. But only against one group.

But where was that outrage previously? You know, where was the concern and resolutions for the doctors, nurses and employees who have been threatened, harmed or even killed because they simply were exercising a safe, proven medical procedure?

For a moment, just imagine what would happen if an orthopedic surgeon was picketed like abortion clinics? Think of the soundbites that could happen when angry protesters rail against doctors who would deign to use a mechanical knee or hip instead of the ones God has graciously given us?

Yet beyond the political theater this meaningless resolution provides, it does two other dangerous things. First, it continues to lend credibility to the anti-abortion “clinic” industry that has largely been unregulated, and may be populated by non-medical professions in a healthcare setting. Many of these “pregnancy centers” don’t really offer medical help or intervention, instead they pressure women into carrying a pregnancy that may not be wanted, raising the specter of physical or mental harm. And since these organizations are largely outside of the medical field, gone is the old “First, do no harm,” mantra.

More dangerous, though, is that Republicans in Congress have steadfastly refused to acknowledge the violence and domestic terrorism that has occurred for decades at clinics that offer reproductive services to women.

Yet, the first piece of business the U.S. House of Representatives manages is a resolution condemning violence to anti-abortion clinics? Where was this compassion and concern for the other clinics?

It would be problematic, but arguably better had the GOP just remained silent, not calling out either specifically. At best, highlighting the anti-abortion clinics is pandering.

However, it’s also sending the possibly intentional message that Republicans will continue to look the other way as supporters target and attack clinics that still offer the legal procedure of abortion – or any birth control.

It’s tragic that a group that so frequently refers to their God and religion seem to express concern for just one group of those concerned about abortion.

When Jesus commanded that we love our neighbor, I guess the GOP figured he didn’t say which ones.

Darrell Ehrlick is the editor-in-chief of the Daily Montanan, after leading his native state’s largest paper, The Billings Gazette. He is an award-winning journalist, author, historian and teacher, whose career has taken him to North Dakota, Minnesota, Wisconsin, Utah, and Wyoming. With Darrell at the helm, the Gazette staff took Montana’s top newspaper award six times in seven years. Darrell’s books include writing the historical chapters of “Billings Memories” Volumes I-III, and “It Happened in Minnesota.” He has taught journalism at Winona State University and Montana State University-Billings, and has served on the student publications board of the University of Wyoming.