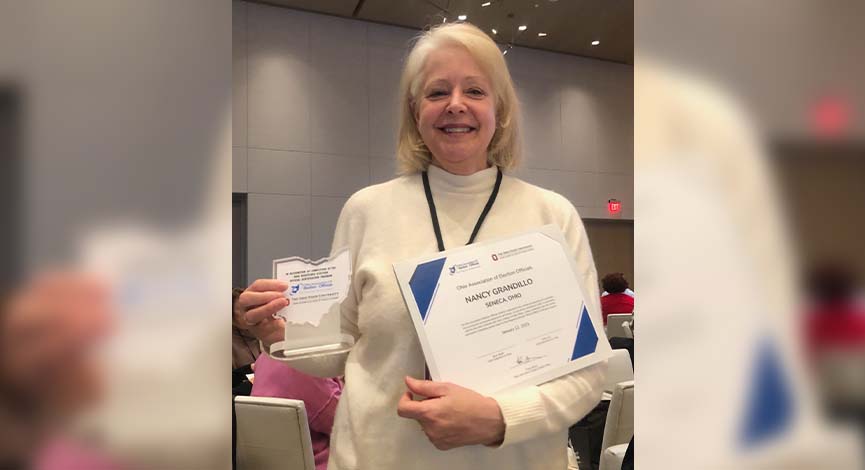 Nancy Grandillo poses for a photo with her certificate and plaque. (Contributed Photo)
ShareTweet

Tiffin, Ohio — Nancy Grandillo, a member of the Seneca County Board of Elections, graduated from the Ohio Association of Election Officials Training Program last week, becoming one of several local board of elections members with this special certification.

Deputy Director Lori Ritzler thanked Grandillo, who was appointed to the board in 2021, for her hard work and dedication to being the best election official she can be.

“Congratulations on earning your professional designation in such a short time on the board,” Ritzler said.

Ritzler said three board members and three staff members have now earned this distinction, one that makes them more knowledgeable and will help them to provide an efficient and secure election process. Ritzler is joined by Director Jim Ehrman, staff member Amanda Davidson and board members Jim Cline, David Koehl and now Grandillo in having the OREO certification.

The program includes eight classes with lectures in Columbus and is offered by the Ohio Association of Election Officials through a partnership with the Ohio State University’s John Glenn College of Public Affairs. It is an Ohio-centric certification program that provides a variety of courses related to election issues from the academic and legal perspectives. There also are courses on how election laws are implemented and applied on the job.

“The course provides training on important issues to make sure we have fair and accurate elections,” Ritzler said.

Grandillo received this honor at the Winter Election Officials Conference on Jan. 12th and 13th, where Directors, Deputy Directors, board members and staff from Ohio’s 88 county boards of elections gathered to refresh their training, network with other counties and swear in new election officials. Secretary of State Frank LaRose also attended the conference to swear in new trustees of the Ohio Association of Election Officials and speak to attendees about the shared accomplishments of the prior four years and the priorities for this new term.

Ehrman and Ritzler thanked board of elections members and staff for always going above and beyond to improve so the team can provide safe, secure and accurate elections.

Sign Up For Free
Related Topics:Nancy GrandilloSeneca County Board of Elections