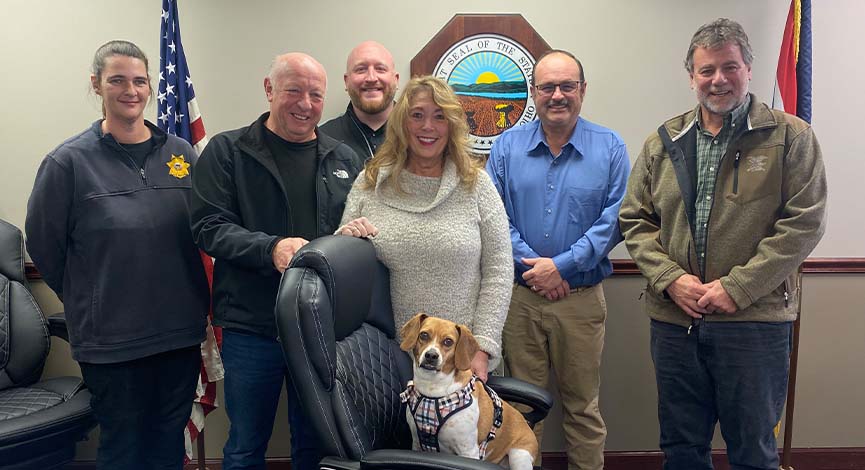 Tiffin, Ohio — The Seneca County Board of Commissioners recognized a local rescue dog and its owners on Thursday morning with a proclamation naming the dog “Seneca County Dog of the Year.”

Buddy, a lovable rescue dog, was found living in a pipe at a grain elevator in Fostoria in poor health and covered in sores from ticks. He was rescued by Seneca County Dog Warden Kelly Marker and adopted by Marquita and Jerry Smith.

Despite his initial shyness and mistrust of people, Buddy quickly adapted to his new home and became a beloved member of the Smith family. His story serves as a testament to the resilience and love of animals.

Buddy was nominated to compete in the 2023 America’s Favorite Pet Contest.

In other business, County Administrator Jaime Wolfe announced that the county had decided to hire Don Ballah as the county’s new EMS Director. He is expected to start the position next month.

Ballah served as the Executive Vice President of North Central EMS, out of Milan, from 1986-2018. He also was a flight paramedic for St. Vincent Mercy Life Flight from 2000-2015, and a paramedic for Lorain Community Hospital from 1985-1986.

Also during the session, Doug Smith, of Blue Streak Project Management, delivered remarks. Smith, originally of Thompson Township in Seneca County, said he now works out of Columbus. He said his company offers no-cost construction project management services for public entities, available through a cooperative program with the state of Ohio.

Construction management services could then be offered for a set fee based on construction dollars. The commissioners asked Smith for more information and will look over and consider what the company is offering.