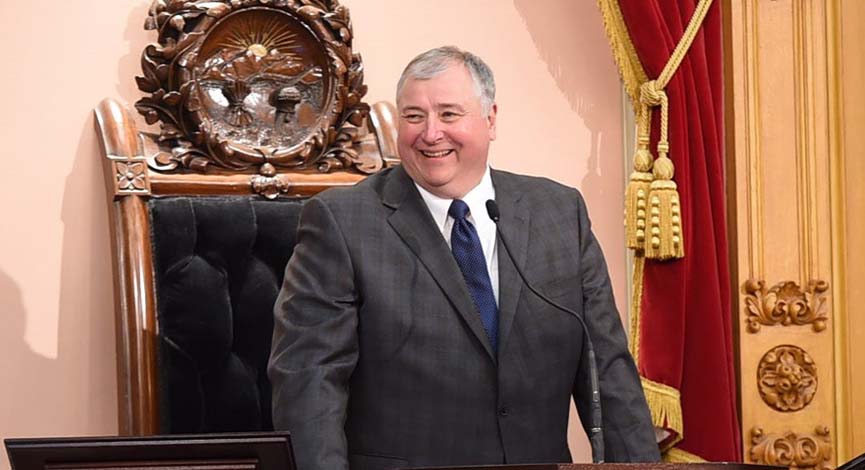 Cincinnati, Ohio — It depends on who you listen to. It was either a gargantuan bribery and money laundering scheme or it was a case of a conscientious public servant using his free speech rights to help the people of Ohio.

Those were the stories told Monday by opposing counsel in the racketeering trial of former state House Speaker Larry Householder. He and a codefendant, lobbyist Matt Borges, are accused of participating in a scheme that used $61 million — largely from Akron-based FirstEnergy — to elect lawmakers who would make Householder speaker and then pass a $1.3 billion bailout that mostly benefited a former FirstEnergy subsidiary.

In announcing Householder’s arrest in 2020, federal prosecutors said it was likely the biggest bribery and money laundering scandal in the state’s 217-year history.

In the midst of her opening, Assistant U.S. Attorney Emily Glatfelter complained that talking amongst Householder’s attorneys was distracting her. Later, with the jury out of the courtroom, Black slammed the lawyers for muttering and making faces and told the lawyers to stop such “bush league” activity.

Glatfelter proceeded to portray their client as an unprincipled official who pulled together a criminal scheme in a lust for power and to line his pockets.

“Larry Householder sold the state out,” she said. “He ripped off the people he was elected to serve. Millions of dollars of bribe payments to pay for his political and personal gain.”

After a stint as House speaker in the early 2000s, a financially distressed Householder in 2015 began to explore another run for the House from his native Perry County, with an eye toward becoming speaker in 2018. At the same time, FirstEnergy subsidiary FirstEnergy Solutions was contemplating filing for bankruptcy largely because its two nuclear power plants were losing money.

“They all met for dinner at a fancy steakhouse,” Glatfelter said.

Weeks later, Longstreth opened a bank account for a 501(c)(4) “dark money” group called Generation Now on the same day Longstreth emailed Dowling and asked for money, Glatfelter said. Soon, FirstEnergy was making quarterly $250,000 payments to the account and at the start of 2018, Householder had $1 million to start recruiting people for “Team Householder” — Republican candidates for the Ohio House who were likely to vote to make Householder speaker, Glatfelter said.

Dark money groups don’t have to disclose their donors and are thus the perfect way to hide bribes, Glatfelter said.

Longstreth and Generation Now subsequently pleaded guilty to their roles in the case, and in a deferred prosecution agreement, FirstEnergy admitted to its role in the scheme.

After the creation of Generation Now, other groups with names like Partners for Progress and Hardworking Ohioans were receiving big dollars — mostly from FirstEnergy — from the group in Householder’s successful effort to get many of his candidates elected, Glatfelter said.

“This is a way to hide money and make it harder to trace, she said.

On two occasions, Householder drove to FirstEnergy’s Akron headquarters to get additional money, the prosecutor said.

Glatfelter said Householder used more than $500,000 for personal things such as paying off credit card debt and repairing his Florida house. But Householder’s lawyer said those funds were merely a loan from Longstreth that Householder planned to pay back.

After winning the speakership, Householder “immediately began fulfilling his part of the bargain” by pushing through House Bill 6, the package of utility bailouts and cuts to sustainable energy programs that the news organization Vox called “the worst energy bill of the 21st century.”

Ohio Gov. Mike DeWine signed the bill the same day it passed out of the legislature.

After the bill became law, opponents started to gather signatures in an effort to get an initiative on the ballot to repeal it. Glatfelter said that Householder and Borges each called Attorney General Dave Yost to try to get him to reject the ballot language or to exempt the measure from a referendum by declaring it to be a tax, Glatfelter said, but Yost eventually allowed it to go forward.

FirstEnergy and related companies spent nearly $40 million to defeat the ballot initiative and Glatfelter said that there are recordings of Borges bribing a man who was working on the effort to get inside information on the campaign.

But Borges’ attorney, Todd Long, said Borges was only trying to help out an old friend who was embroiled in a costly custody fight. Long also said that Borges, a former state Republican Party chair, had worked with several utility clients, including FirstEnergy and AEP.

The attorney added that Borges supported several candidates that Householder wasn’t and that his client and the former speaker “had political rivalries going back for years.”

“There’s a universe of difference between Matt Borges and everybody else in this case,” Long said. “He was never a member of Team Householder.”

One of Householder’s attorneys, Steven Bradley, made the case that his client only did what he had done previously — amass the huge amounts needed to get sympathetic candidates elected. That’s not illegal, Bradley said.

“These campaigns cost a ton of money and one of the things (Householder) was good at was fundraising,” Bradley said.

In bailing out the two Northern Ohio nuclear plants, Householder was trying to save jobs and the tax bases of small school systems, Bradley said. But the attorney also made a few questionable assertions.

He claimed that the FirstEnergy subsidiary that owned the plants — FirstEnergy Solutions — was “completely independent” after it removed First Energy people from its board and replaced them with directors from outside the company.

Prior to its consent decree, FirstEnergy made a similar argument. But in a lawsuit to stop the nuclear bailout, Ohio AG Yost noted that FirstEnergy CEO Chuck Jones also acted as CEO of FirstEnergy Services, which provided FirstEnergy Solutions with “administrative, management, financial, compliance, ethical, external affairs, and political and regulatory advocacy services… ”

Bradley also referred to HB6 as the “Ohio Clean Air Program” because it supported nuclear generation, which he said was “clean, renewable, carbonless energy.”

But that ignores the fact that the law gutted the state’s renewable energy standards. It also provided hundreds of millions in subsidies to support uncompetitive coal-fired plants owned by companies other than FirstEnergy — such as AEP. And one of those plants subsidized by Ohio ratepayers isn’t in Ohio, but Indiana.

The trial resumes today, Tuesday, with testimony expected from former FirstEnergy officials. It could last as long as six weeks.