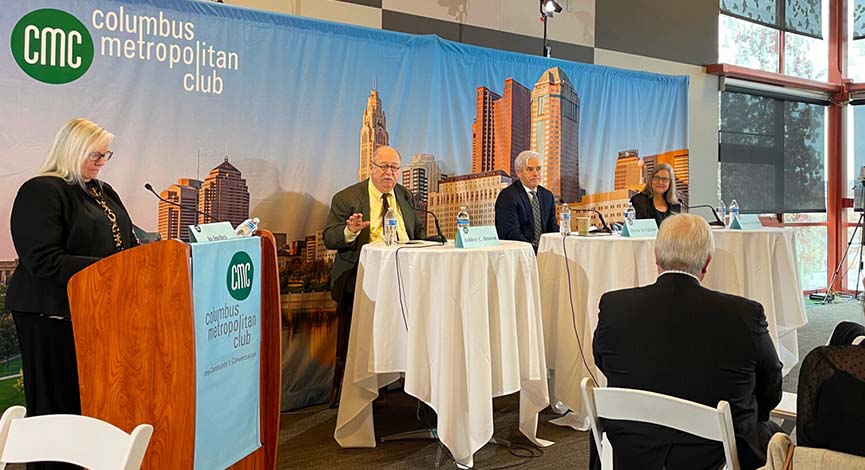 Next week, Householder will be in court facing charges in the largest corruption case in the state’s history. At its heart is House Bill 6, an energy bailout pushed through the state legislature by Householder. He allegedly bankrolled that effort, and his speaker bid, with $60 million that originated with utilities like FirstEnergy and AEP and passed through 501(c)(4) dark money groups. Householder has pleaded not guilty.

DeVillers, who as U.S. attorney indicted Householder, acknowledged the case might not change the campaign finance landscape in the long run. But in the more immediate term, he argued it has brought more scrutiny.

“So, this is the bottom line,” DeVillers said, “I think that in the short term, I hope that prosecutors and agencies look at these things and scrutinize these (things) as the perfect animal, the perfect entity, to launder money.”

Kowalski, meanwhile, worried the trial’s outcome will determine any impact.

“If Householder and (codefendant Matt) Borges are not found guilty, I would be afraid you would have more entrenchment in the use of dark money,” she said. “If they are found guilty, I think there may be this higher level of scrutiny David (DeVillers) referred to, but I think a lot is going to depend on the outcome of the trial.”

Under IRS rules, 501(c)(4)s advocate for social causes. Which, according to the IRS, means they can’t benefit an individual or engage “primarily” in politics. Wryly, DeVillers noted groups regularly flout those rules, “I mean, that’s pretty much what they do.”

Importantly, 501(c)(4)s don’t need to disclose their donors. That’s good, DeVillers explained, if you want to support a cause your employer opposes. But it also opens the door for corporate interests to exert influence discretely.

Courts have struck down state attempts to make donors public. But DeVillers argued their reasoning was based on how broad those laws were, not whether states have a compelling interest.

“Basically what they’re saying is, you can’t just say every single person give us this information,” DeVillers said “But you can send out random audit letters, you don’t need like probable cause or reasonable suspicion, and ask for this stuff and require it through an audit.”

But DeVillers complained there’s no political will to do so.

Brown, who served on the Public Utilities Commission of Ohio board in the 1980s and 90s, offered another approach.

“If a company is licensed by the state or is dependent on a state concession,” Brown argued, “I think the compelling public policy argument for disclosing political contributions whether they be through (c)(4)s or open ones, and policing that at minimum to require disclosure perhaps even prohibitions in some cases, ought to be clear.”

“If somebody is laundering money through dark funds,” Brown added, “and then ends up being state concessions, there’s a prima facie case suspicion is warranted.”

What to do about utilities

Brown’s approach takes particular aim at the large businesses that provide vital services. Facing heavy regulation, these companies often do a lot of lobbying. But not all those companies take the same approach. “There are warning signs about FirstEnergy that go back 30 or 40 years,” Brown said.

He described a lobbyist showing up with an envelope on his first day with the PUCO. Inside was a list of people at FirstEnergy who had contributed to the governor’s campaign. The suggestion being Brown’s boss “has a lot of friends” at the company and he should keep that in mind.

Brown argued the PUCO now has been too lenient with companies who bankrolled Householder and HB 6. He recalled an instance where regulators forced out the board of Columbia Gas after uncovering a scheme to bail out a subsidiary by purchasing gas at above-market rates and pass along the expense to Ohio ratepayers.

Responding to an audience question, DeVillers argued against dissolving the company.

And he contended the deferred prosecution agreement they’re facing is no picnic. Not only has the company paid millions in fines, it now has the Department of Justice looking over its shoulder.

Brown, though, dismissed the fines as a “parking ticket,” and argued no one aside from management need lose their jobs.

“Put it into receivership,” he argued. “What you want to do is remove the top management, no employees are going to lose their job, equipment isn’t going to disappear. Somebody’s going to take over that company, ultimately, and there’s a procedure under Ohio law that that can be done.”

Sign Up For Free
Related Topics:briberycorruptionFirstEnergyPublic Utilities Commission of OhioPUCO