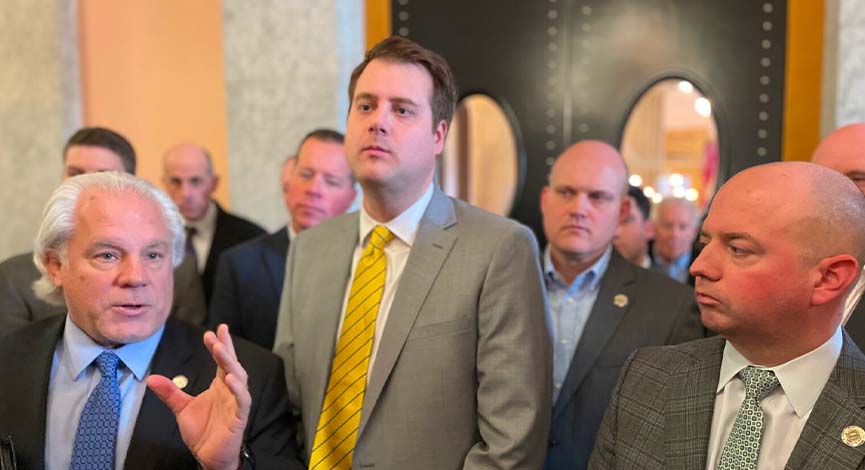 After a weeklong meltdown of moaning, wailing, and gnashing of teeth, a new faction of Ohio House Republicans capped off their temper tantrum Wednesday by revitalizing plans to subject the Ohio Constitution and all Ohioans to extremist minority rule.

Last week, 54 adults in the Ohio House came together in a bipartisan vote to elect Kitts Hill Republican state Rep. Jason Stephens as House Speaker. This included 22 Republicans alongside 32 Democrats.

Some of the provisions of the deal Stephens offered Russo aren’t as solid as others, Russo said: Nothing is in writing, but rather agreements, compromises, and known Democratic wants.

It includes a confirmed goal of getting bipartisan and constitutional district maps and a constitutional Fair School Funding Plan for Ohio public education.

It also includes preventing charter school voucher expansions, anti-union bills including any “Right to Work” law, and House Joint Resolution 6, the Republican attempt to give control over Ohio’s Constitution to a 41% minority of voters.

No Ohioan should greet the deal as any kind of guaranteed protection from right-wing radicalism. It certainly shouldn’t be thought of as a “coalition government,” as many in the national press wet themselves with excitement to exclaim.

But this deal is the first step down a path that, if stuck to, could lead to less insane and more thoughtful lawmaking.

That’s something devoutly to be wished by all reasonable Ohioans.

Meanwhile, the petulant shrieks of the religious zealots, the anti-reality COVID deniers, the un-American grifter know-nothings, and the hate-mongering bullies of children, echoed across our great land. After the deal, the Ohio Republican Party voted to censure the 22 Ohio Republicans for voting for an Ohio Republican House Speaker.

Perhaps nothing better illustrates the toxic crankery that the Trumpian Republican Party has descended into than that. Somebody get these babies their binkies.

Tensions in Columbus between the old Ohio Republican guard and the neoreactionary culture war radicals have ruptured, but they’ve been bubbling for some time.

It’s a battle not just playing out among the politicians, but also among their donor classes and special interests.

On one hand you’ve got the harebrained authoritarian religious hucksters and crank conspiracy nuts, and on the other you have your classic supply-side-worshipping Scotch and martinis country club set.

Now they’re going to war with each other, and the lives, livelihoods, and well-being of all Ohioans hang in the balance. What a time to be alive.

You know I have to say it: This is exactly what happens when one party rigs elections by gerrymandering itself into undue power for 30 years.

When districts are drawn to be completely uncompetitive in general elections, unqualified and unthinking radicals are able to steamroll through primaries and win real power and influence.

The chickens are home now at the Ohio Statehouse, and roosting.

It doesn’t have to stay this way.

The adults right now have the opportunity to make the Ohio House something resembling a serious legislative body, instead of a playpen for anti-social lunatics.

Ferberize these infants. Let them wail until they learn to self-soothe. Ignore them, and set about the solemn work of thoughtful, dutiful governance.

One key point of good governance: Attacks on voters and representative democracy can not be tolerated. That seems so fundamental it feels absurd it needs to be said.

So the adults can begin by once again killing state Rep. Brian Stewart’s Frankenstein proposal to enshrine extremist minority control over the Ohio Constitution.

In one of the dumbest examples of giving the game away I’ve ever seen, Stewart admitted in writing that his proposal is all about keeping Ohio’s radical abortion ban on the books and preventing further redistricting reform.

We’re talking about an abortion ban that forces 10-year-old rape survivors to flee the state for health care, and illegally gerrymandered U.S. Congressional and Statehouse district maps that have been declared unconstitutional seven times.

LaRose is still peddling the proposal, now absurdly claiming it’s not about abortion or gerrymandering, but holograms and flying cars 50 years from now. Seriously. He said that. And apparently thinks we’re all dumb enough to buy it.

Meanwhile, the new Republican crybaby caucus made Stewart’s proposal their No. 1 priority Wednesday because they know this is how their bread is buttered: By being in league with the religious fanatics at the “Center for Christian Virtue,” and by being gerrymandered into never facing a competitive election.

For the adults, the hard part is over. Practical politics is the art of alliances and compromise.

The adults have a workable framework for compromise. They have the power they need. Now we see if they stick together and take advantage of the opportunity.

And with an eye toward long-term maps, after LaRose and Stewart’s new nightmare is hopefully dead again, the adults could turn the confirmed goal of bipartisan, constitutional district maps into an actual reality.

Nothing would better help manifest more reasonable and representative members of the Ohio House than sapping the ability of crank windbags to waltz into the chamber with no electoral accountability.

I’m never optimistic about Ohio politics, but what I’m saying is, they all have a choice right now.

The adults can move forward and govern like reasonable human beings, or we can all continue to experience these nationally embarrassing, paranoid, ill-informed, hate-mongering, extremist lawmakers creating a chaotic mess out of Ohio law that plays hell on millions of real Ohioans’ actual lives.