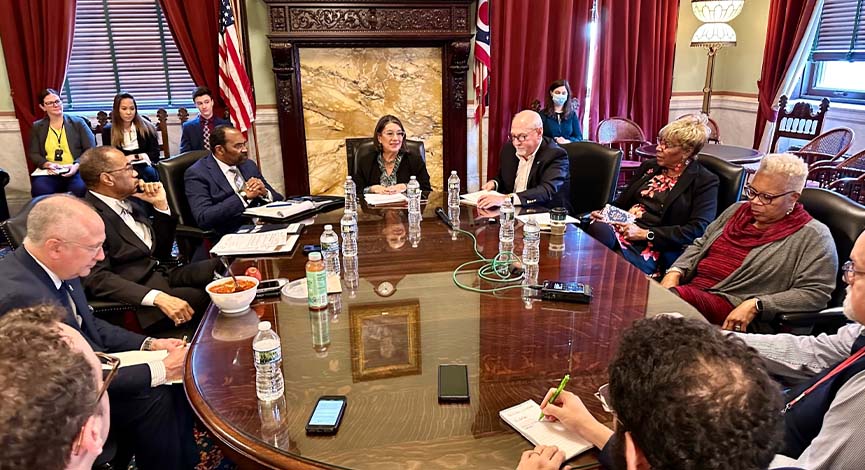 Ohio’s Senate Democrats gathered in a Statehouse conference room Tuesday to discuss their priorities for the coming term. The gathering itself offered a stark visual reminder of the challenges the minority faces. The seven Democratic senators weren’t even enough to fill the small conference table where they met.

Working from the minority

“Our minority status — which by the way, was by design without fair districts — forces us, I think, to be more creative, and more nimble, and certainly more collegial and collaborative,” Antonio said.

She added the dysfunction currently arresting the House GOP might create opportunities for the party.

“Perhaps that means there’s an opening that there are more things that we can get done in the Senate, if there’s dysfunction in the other chamber,” she explained.

The members went around the table sharing their top issues for the coming term. Obviously their ability to partner with majority members helps their prospects, and they have a few irons in the fire.

Perennial Democratic issues will return this term, too. They’ll push for anti-discrimination, minimum wage, and school funding legislation. Significant movement on any one of those issues would be an enormous achievement given the size of the minority.

They’re also planning some small changes they believe could yield major results. Sen. Vernon Sykes, D-Akron, wants to expand the minority direct loan program to cover working capital instead of just fixed assets or surety bonds as it does now.

“Oftentimes, minority businesses, small businesses, have to pay higher rates for their loans,” he said. “This would give them opportunity to have access to lower expense, lower cost.”

Similarly, Sen. Kent Smith, D-Euclid, zeroed in on a rate review provision from a GOP-backed utility overhaul that stalled out last session.

Sen. Bill DeMora, D-Columbus, argued lawmakers need to make it easier to age in place by bringing down the cost of property taxes and health care for seniors. Meanwhile, Sen. Catherine Ingram, D-Cincinnati, described herself as “the eclectic one” interested in all of it.