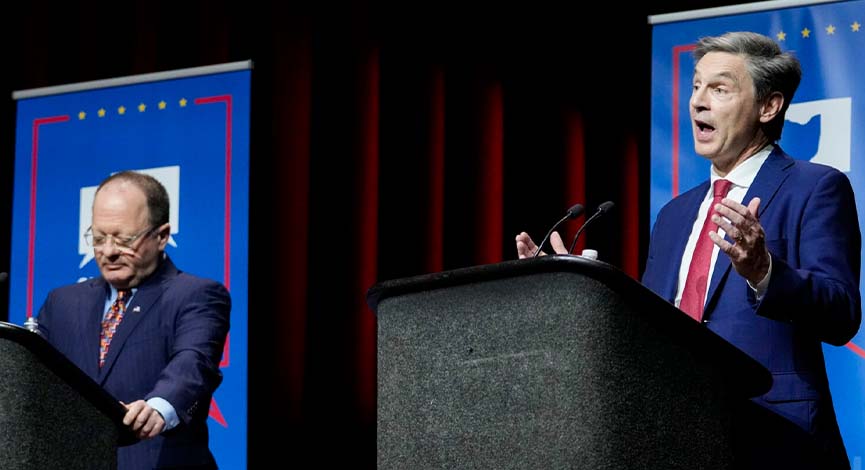 Ohio state Sen. Matt Dolan will try again to become Ohio’s U.S. Senator in 2024. In a campaign announcement Tuesday, the Chagrin Falls Republican said he is “unapologetically committed to putting the needs of Ohio first.”

Dolan’s entry, first reported by NBC News, marks the first Republican challenge to Democratic U.S. Sen. Sherrod Brown. Ohio’s primary date is still up in air, but Dolan’s timing — likely more than a year out — seems calibrated to clear the field. Whether that works is far from certain. For years, rumors have swirled that Secretary of State Frank LaRose has 2024 circled for a Senate bid of his own.

But the 2022 U.S. Senate primary isn’t exactly a distant memory for Dolan. In that race he spent more than $11 million — nearly all of it his own — to come in third behind Josh Mandel and eventual winner, U.S. Sen. J.D. Vance. Republican Rob Portman’s open Senate seat drew a total of nine GOP candidates. Many of them leveraged their personal fortunes to bankroll their bids in a brutal primary.

One notable consideration is the weight of endorsements. Donald Trump’s decision to back Vance propelled him to victory in the primary. Dolan was the only candidate who distanced himself from the former president. LaRose was one of just five secretary of state candidates in the country to get Trump’s backing.

What year is it again?

The proximity of the 2022 race is hard to miss in Dolan’s announcement, too. His arguments seem lifted directly from the previous contest.

Republican office seekers could, and did, lob the same criticisms around during last year’s race. Dolan harps on inflation like it’s 2022 despite the latest report showing prices are beginning to cool.

His attack lines feel a bit familiar as well. Just as Vance criticized his Democratic opponent Tim Ryan for voting “with Nancy Pelosi 100% of the time,” Dolan derided what he called Brown’s “blind loyalty to his party’s agenda 98% of the time.”

“Together with Joe Biden,” Dolan argued, “Sherrod Brown has kicked America’s problems down the road for a generation. Their time is up.”

Despite Dolan’s somewhat warmed-over rhetoric, it’s a playbook that worked the last time — albeit not against an incumbent. And although Dolan finished third in the last primary, he did so spending less than some, and with fewer notable endorsements than others. His decision to focus on Ohio issues rather than a national narrative, resonated with a significant share of the GOP electorate.