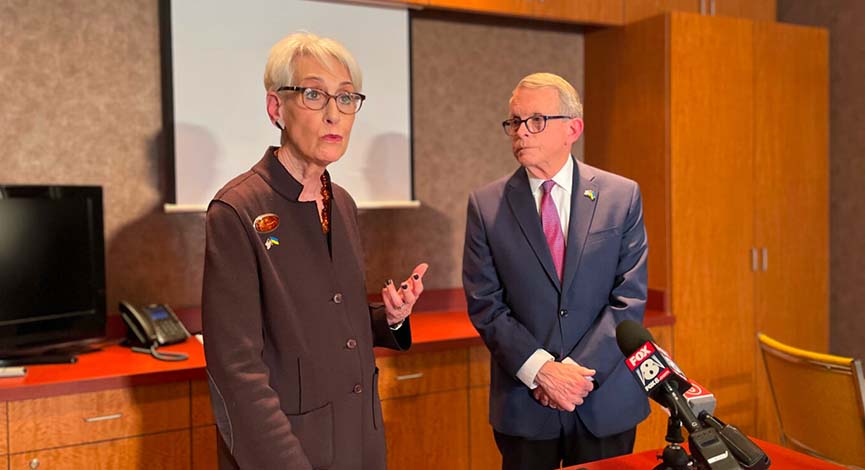 Deputy Secretary of State Wendy Sherman speaking after a roundtable in Parma with Gov. Mike DeWine and a delegation of local officials and organizers. (Photo by Nick Evans, OCJ.)
ShareTweet

In Parma Tuesday, Gov. Mike DeWine met with federal officials and Ukrainian refugees to discuss the challenges new arrivals face. The war in Ukraine prompting an exodus to friendly countries is nearing its first anniversary.

DeWine sat at the head of a table in a conference room above a Ukrainian Village credit union. Deputy Secretary of State Wendy Sherman sat alongside the governor. Local officials and organizers in the Ukrainian community filled the table.

Sherman reiterated the country’s commitment to supporting Ukraine against the Russian invasion.

“We will keep leading this case and cause because it aligns with our interests and our values,” she said, “and it sends a clear message that attempts by any country to dictate another’s borders or policies will be met with strength, unity, and action across our country and across the globe.”

DeWine highlighted an effort through local law enforcement agencies to donate surplus protective equipment to Ukrainian soldiers. He explained there are nearly 1,000 agencies around Ohio.

“We started thinking about that, and maybe some of them had some of the vests that they did not need, or they could spare,” DeWine described. “We started taking inventory and we were frankly very pleased with what we were able to come up with. Again, we try to do the small things that you can do.”

Still, he acknowledged, “while we have done the things that we think we can do, it always seems so little.”

Tuesday afternoon Ohio made much more significant contribution to Ukraine’s war effort — albeit indirectly. After weeks of deliberation, the Biden administration agreed to send Lima, Ohio-built Abrams tanks to the Ukrainian frontlines.

“We are trying to support Ukraine in every way we can, step-by-step, depending upon what the needs are on the battlefield,” Sherman said to news of the announcement.

“Let me just say I support that,” DeWine added. “I support giving Ukraine the tools that they need to push Russia back and to defend freedom.”

Organizers didn’t allow press inside for the meeting. Speaking afterward, Sherman noted the emphasis community leaders placed on needs in Ukraine rather than within the refugee community sheltering in Ohio.

“They talked about the needs that they see in Ukraine,” she described. “Whether there are medical needs, ability to train different professions, understanding that so many people have gone to the front lines — to make sure that the institutions in Ukraine have what they need.”

“We didn’t hear people raising their hand (who) want anything for themselves,” DeWine explained. “Really what they want is for us to be able to continue to help Ukraine, and I think people are looking for ways to be of help.”

That focus on maintaining a functional civil infrastructure is, in part, just the latest front in the war. In Sherman’s words Russia is attempting to “weaponize winter,” and Ukrainians here are concerned about the cumulative stress that places on institutions back home. She insisted the state department is attentive to those concerns.

But for those living here, maintaining Ukraine is also about ensuring they have a home to return to. Many are living in the U.S. as humanitarian parolees — a temporary status sometimes used to move people out of danger. But parolees have limited access to public support, and there’s a time limit on their stay.

Asked whether lawmakers need to consider softening those deadlines, DeWine sidestepped. He insisted “most of the people who are here, want to go home.”

“They want to go home to Ukraine. And I think when this war ends, and when Ukraine is victorious, you will see most of them wanting to do that, and will in fact go home,” DeWine said.

“Most Americans don’t realize that literally millions of Ukrainian refugees are in countries in Europe,” Sherman added, “being fully supported by those European countries at their own expense, knowing that they don’t want to stay, they want to go home.”