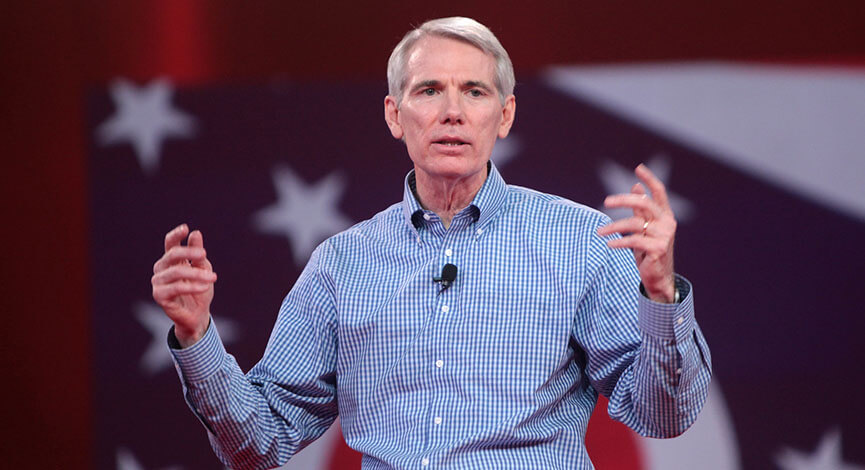 Good riddance, Rob Portman. As a now former U.S. Senator from Ohio, you will be remembered not as a principled statesman but as a moral coward. We, your constituents, hoped for better from you but it never came. Even after Jan. 6 you couldn’t summon the courage to convict a traitorous ex-president for what you called “an attack on democracy itself.”

When your country cried out for justice surrounding the grievous treachery and unthinkable assault on the U.S. Capitol, you took a convenient off-ramp to deny it. When it mattered most in history’s eye, you ran and hid. You avoided the heat. Fell in line. Team player above all else. Even after Jan. 6. you couldn’t bring yourself to stand for right in a sea of wrong.

You didn’t just take a partisan pass on the egregious abuses of power and unprecedented lawlessness of the previous president, you gave him free rein to corrupt without consequence. You really were, as one writer put it, “the profile of a Trump enabler.” A predictable facilitator of an authoritarian narcissist. That, Senator, more than any legislative accomplishments, is your legacy for the ages.

You personified the passivity-in-the-face-of-evildoing that Martin Luther King Jr. warned about decades ago. “He who passively accepts evil is as much involved in it as he who helps to perpetrate it. He who accepts evil without protesting against it is really cooperating with it.” You, sir, could always be counted on to accept, defend, excuse, and acquit the most amoral man to ever occupy the Oval Office.

You’re still doing it. When the Jan. 6 committee recommended Trump’s prosecution to the Justice Department, you downplayed that extraordinary development as less important than the committee’s extensive testimony and final report. (As if accountability for the central plotter of the attempted coup was less consequential than a detailed breakdown of his deviousness.)

When you stood with your party and acquitted the seditious schemer on lame procedural grounds, you gave him another go at seizing unearned power. Before you enabled him again — with a dishonest argument that a former president can’t be convicted of high crimes and misdemeanors committed in office — you went so far as to say public criticism was an appropriate “consequence” for Trump’s incitement of the riot by his followers that results in multiple deaths at the U.S. Capital.

You won’t make waves. Not worth triggering the ire of the miscreant you empowered or the extremist following he exploits. Even now you haven’t ruled out supporting a Trump 2024 reelection campaign. You praise the “good things” an abiding threat to the republic did with tax breaks (for the wealthy) and such.

You endorsed a born-again bootlicker on Team Trump to succeed you (in service to party) despite his radical positions on purifying the government to banning abortion and incentivizing higher birth rates. You valued a return to a GOP majority in the Senate more than continuing vital aid to Ukraine by championing a successor who opposes it and declared he couldn’t care less “what happens to Ukraine one way or the other.”

But then you, one of the Senate’s foremost advocates for the fledgling Eastern European democracy, refused to lift a finger against the evil-doer in the White House extorting the vulnerable ally for personal gain. To your eternal shame, you not only were fully aware of Trump’s despicable extortion campaign — to pressure a foreign government to corrupt our election process by withholding desperately needed military aid — but you enabled him to get away with it.

You invented a cover story for Fox News (Trump illegally froze Ukraine funds to make Europe pony up more) to smooth over an unmitigated shakedown of a country battling to survive merciless Russian bombardment. The extorter-in-chief ran with the story despite a mountain of evidence to the contrary from damning phone call transcripts to first-hand accounts of his coercion efforts in Ukraine to get dirt on a political foe in exchange for assistance.

You called Trump’s appalling arm-twisting with Ukraine’s frantic president (“do us a favor, though”) “inappropriate” but not rising to an impeachable offense. You voted to shield him (and you?) from additional witnesses and documents in a sham Senate trial before joining every Republican, save one, in voting to acquit and embolden his unrestrained villainy. Which came Jan. 6 and threatens to return with a vengeance.

Because you let it.

When history takes a good, long look at your complicity of silence and careful detachment to wrongdoing on a grand scale, its judgement will be harsh. Maybe you couldn’t have stopped the Mar-a-Largo Malefactor from defiling the U.S. Constitution and nearly destroying our democracy. But you, and the pack of other so-called moderate Republicans, could have tried.

You didn’t try. So you don’t get to depart the Senate under the façade of a job well done. You failed us and you failed your country when it mattered most. Good riddance.