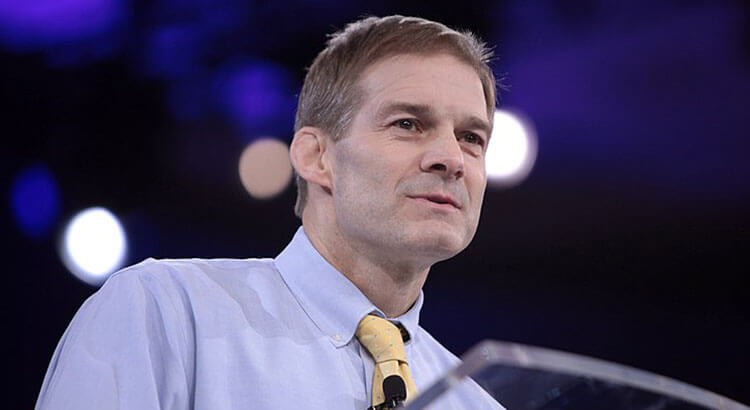 Jim Jordan went there. I had to replay C-SPAN to be sure. But early in last week’s embarrassing Republican spectacle, over what is now a purely ceremonial U.S. House speakership, Ohio’s own coup-plotting congressman feigned fidelity to the U.S. Constitution he was willing to trash two years ago. Seriously. Of all people, Jim Jordan, the gerrymandered-for-life show pony from the 4th District, went there.

Trump’s mini-me rose to give one of the 15(!) nominating speeches it took to get a ridiculously feckless leader over the finish line. The MAGA performer did his usual (tired) schtick bemoaning  the terrible state of everything under Democrats — while his out-of-control, incoherent, and ungovernable caucus imploded for days nearly coming to blows. But then Jordan, a “significant player” in Trump’s traitorous efforts to overturn a free and fair election and stop the peaceful transfer of power, pivoted.

He broke character with his insurrectionist advocacy.

Jordan began a rant about all the investigations that must happen with Biden administration bureaucrats who “have assaulted our constituents” and “need to be held accountable” with made-for-TV fireworks that last forever and beat writing and passing laws. But, as if to temper his undisguised zeal for putting the screws to Democrats, the new chair of the Judiciary Committee stressed that his combative, in-your-face inquisitions would be proper.

“We need to do it in a way that’s consistent with the Constitution,” said the Jan. 6 co-conspirator apparently without any self-awareness of his jaw-dropping hypocrisy. That the smallish Benedict Arnold could even utter those words about adhering to the fundamental law of the republic he aggressively undermined shows how rudderless he truly is. Attempting to overthrow the government is anything but consistent with the Constitution.

Jordan’s newfound loyalty to the codified core values of the American people is conditional. By his extensive involvement in Trump’s electoral subterfuge — from as early as November 2020 to Jan. 6 and beyond — Jordan affirmed that being “consistent with the Constitution” depended on the circumstances. Plainly, sedition was an exception to the rule.

Yet Jordan had the gall to stand in a full House chamber as C-SPAN cameras rolled and profess adherence to duty in accordance with the founding charter of the United States! It was a double-take moment of full-on disgust. Shameless temerity from a little man allied with an authoritarian loser who conspired lawlessly to commandeer power not given in the Constitution or earned at the ballot box.

Jordan forfeited any claim of fealty to the Constitution when he broke faith with it and threw his allegiance to a dangerous megalomaniac bent on overthrowing his own government. That truth must dog Jordan every time he opens his mouth. Never forget that he willingly became the domestic enemy he vowed to defend the Constitution against.

So he does not get to wrap himself in it now to give himself the veneer of legitimacy. Certainly not on the second anniversary of the violent insurrection he helped enable. The final Jan. 6 committee report placed Jordan at the center of numerous post-election meetings following Trump’s losing reelection campaign where illegal strategies were devised to reverse the certified outcome of the 2020 race by rejecting millions of valid American votes.

Your vote. My vote. Didn’t matter.

The supremacy of the people to determine their elected representatives by their most sacred right to vote was irrelevant to Jordan and others scheming to steal power denied Trump by voters who elected his opponent. Their voices would have been silenced if it had been up to the Ohio Republican and his cohorts who came perilously close to ending two centuries of American self-government.

Jordan was knee-deep in the underhanded tactics leading up to Jan. 6 with White House calls and texts before, during, and after the unprecedented attack at the Capitol. There is no reconciling that brazen undemocratic, un-American treachery with Jordan’s hollow claim to comply with the Constitution now. The first three words of that hallowed document begin with “We the People.” Jordan should read what he was willing to trash for Trump.

The day before Trump supporters went on the hunt to “Hang Mike Pence!” Jordan shot a text to his pal and White House Chief of Staff Mark Meadows suggesting the vice president could “call out all the electoral votes that he believes are unconstitutional as no electoral votes at all.” He advanced the falsehood that the Constitution gave Pence that authority — unilateral power to call an election already decided by nearly 158.4 million American ballots.

Nothing Jordan did in the secret subversive sessions leading up to the bloodthirsty rampage to stop Congress from fulfilling its constitutional duty to certify the winner of the Electoral College vote was “consistent with the Constitution.” He can quote “my favorite Scripture verse” and pretend that he’s about fighting the good fight for “the good people of this great country,” but it’s just for show.

Jordan performs. He hasn’t written a law in the last 16 years or done much of anything but make noise, throw shade, troll, obfuscate, grandstand, and attempt to overthrow democracy. He’s a fraud who tried to pass as an upright, conscientious representative last week. Jordan actually went there. It was laughably tragic.