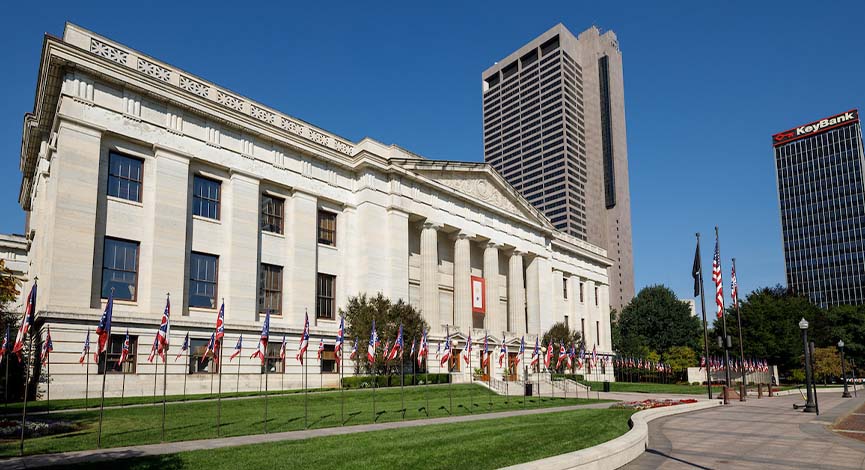 For years, legislators in the Ohio General Assembly have been working to abolish the state income tax. Republicans now command historic majorities after the 2022 midterm elections. Because of this, Cleveland.com politics reporter Jeremy Pelzer is saying income tax abolition is now closer than ever.

The caveman argument for abolition of the income tax is “tax bad.” I don’t have much to say about this: taxes can distort the economy but they also fund important public services, can help reduce inequality, and even fix distortions in the economy when deployed correctly.

Cutting income taxes on its own is unlikely to generate enough new revenue to pay for itself, as Kansas painfully demonstrated a few years ago. Due to Ohio’s balanced budget mandate, abolishing the income tax would require either steep reductions in spending (with cuts in education spending being the only likely path) or an increase in the state sales tax.

Some of these states are able to take this approach because they either have alternate sources of revenue (oil in Alaska, Texas, and Wyoming, gaming in Nevada) or have a relatively small income tax base due to a high retiree population like Florida. Ohio has none of these luxuries. Zach Schiller from Policy Matters Ohio argues Ohio would need to raise sales taxes higher than any other state to make up for the lost revenue from income tax abolition.

The big problem with a shift from income tax to sales taxes is the impact the shift would have on poverty and inequality. Income taxes are higher for workers who earn more and increase in rates for higher levels of income.

Is there a way to shift from income to sales taxes while addressing the equity problems caused by such a shift? Yes, theoretically. By increasing the sales tax enough to fund an expanded earned income tax credit, child tax credit, or other antipoverty program, Ohio can theoretically offset the equity impacts of the tax shift with new antipoverty spending.

Moving to a sales tax regime with heavy investment in pro-poor programs would actually make Ohio’s public finance look a lot more like Europe’s. The U.S. relies less on consumption taxes than any other OECD country, instead using income taxes to finance its public spending.

It would take a bit of spending to make a significant dent in poverty — my firm estimates there are over a million Ohioans living in poverty, so a $1,000 rebate only targeted at those in poverty would cost over a billion dollars. A four percentage-point increase to the cost of all sales would put a family spending $24,000 at nearly that much on its own, so it would make this policy a breakeven policy for poverty.

In the scheme of a $10-billion-odd tax reform, a billion or two focused on poverty does not seem like a difficult lift. Unfortunately, the politics of a couple billion dollars for the poor can be more sticky than the politics of $10 billion for the rich.

Conducting tax reform that promotes efficiency and equity is not impossible. It will, however, require policymakers to be as committed to the latter as they are to the former.