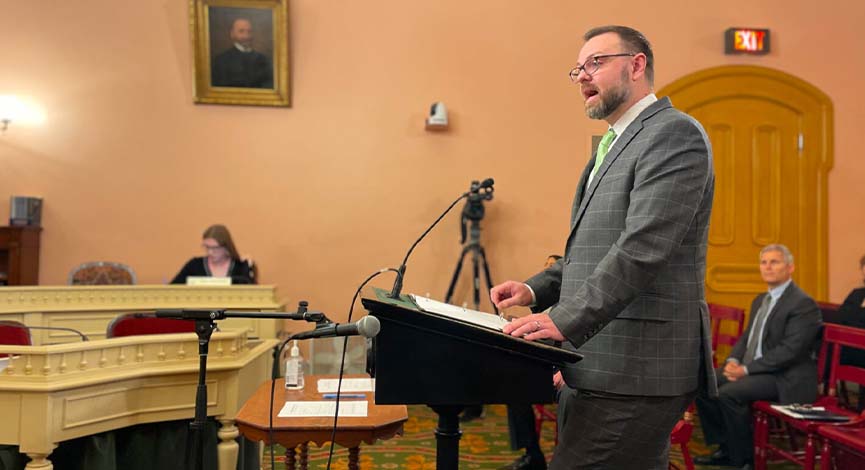 The Ohio House effort to make amending the state constitution more difficult has been notable thus far for its lack of public support. In committee hearings and press conferences opponents have lined up against the proposal. Indeed, despite the resolution’s rapid progress, 140 interest groups have already signed on denouncing the plan.

Although three organizations have voiced support for HJR 6 with written testimony, none had shown up to advocate for the proposal in person. That changed Thursday.

Travis N. Taylor, of Hamilton County, holds a PhD in political science and serves as a visiting fellow with the Opportunity Solutions Project (OSP). The Florida-based organization is non-partisan but describes its mission as “advocating for public policies based on the principles of free enterprise.”

OSP has had an in-state visiting fellow advocate for raising requirements to pass constitutional amendments previously in Arkansas. OSP has also advocated for election changes in Pennsylvania, Florida, Iowa, and Kansas.

The Kansas City Star reported in a profile of OSP, “In the wake of former President Donald Trump’s lies about the 2020 election being stolen, the organization has become a leading advocate for state bills to place restrictions on election administration.”

The Opportunity Solutions Project’s CEO, Tarren Bragdon, is also the CEO of the Foundation for Government Accountability, which has close ties to the American Legislative Exchange Council (ALEC). Founded by right-wing billionaire Charles Koch, ALEC crafts model policy bills for legislators to use around the country.

In line with the ALEC priorities listed on the FGA website regarding welfare program reform, the OSP also has a track record of lobbying around the country for new restrictions on public benefit programs. In Kentucky it advocated for work requirements for food assistance, and in Wisconsin it backed similar requirements for Medicaid recipients. In Kansas, OSP lobbied for both.

As a 501(c)(4) organization, OSP doesn’t need to list its donors. In its native Florida, OSP has backed and even helped draft legislation that would further shield the identity of entities that contribute to organizations like itself.

Taylor argued the changes proposed for Ohio’s Constitution are a “simple reform with strong roots in American constitutionalism.” Demanding broad consensus for passage, he argued, insulates the constitution from frivolous changes.

“Out of state interests,” Taylor argued, “have made it their mission in recent years to drop into states, skirt the people’s representatives — you all — produce slick and at times misleading advertising campaigns, and pass their preferred policies by a slim margin of the vote.”

He insisted that approach undermines the integrity of the process. A higher threshold for passage, he argued, “would give Ohioans an important layer of trust in the initiative process.”

Taylor went on to note excepting the Bill of Rights, the U.S. Constitution has been amended just 17 times in 231 years. He argued the proposed changes won’t foreclose access to the ballot.

Taylor spent the better part of the next hour fielding questions from Democratic committee members. The irony of Taylor warning of out of state interests while speaking on behalf of a Florida-based dark money group wasn’t lost on Rep. Bride Rose Sweeney, D-Cleveland.

“Isn’t that an out of state based organization?” Sweeney asked about Opportunity Solutions Project.

“I know you’re an Ohioan yourself,” she went on, “but you’re here representing an organization that, your work is to go into states — which I’m not saying that’s wrong or bad — but your organization comes in to share your perspective, your agenda in multiple different states on ballot issues like this.”

Reps. Bishara Addison, D-Cleveland Heights, and Elgin Rogers, D-Toledo, both pressed Taylor on dark money. If Taylor’s complaint is with well-funded out of state interests, they asked, why aren’t you advocating for financial transparency legislation?

“It sounds like philosophically, you have an issue with out of state interests or out of state money coming into Ohio’s electoral process,” Addison said, “So do you have a position on the kinds of money that come into our campaigns?”

Chair Shane Wilkin, R-Hillsboro, batted those questions down, however, arguing they strayed too far from the content of the resolution.

Rep. Richard Brown, D-Canal Winchester, grilled Taylor on the proposal’s timing. If greater consensus will better protect the constitution, Brown asked, why would the amendment go to voters during a low-turnout, odd-year primary election? Taylor didn’t offer much in response.

“I can’t speak to the intent of the sponsors, or to the wisdom of which ballot this should go on should it pass the House,” he said. “This is about restoring trust in democracy, and I believe that this resolution would accomplish that.”

The committee schedule for the coming week isn’t set. Before gaveling out, though, Chair Wilkin noted they may meet again Monday. That likely gives the committee time to vote on the resolution, and get it to the House floor next week.