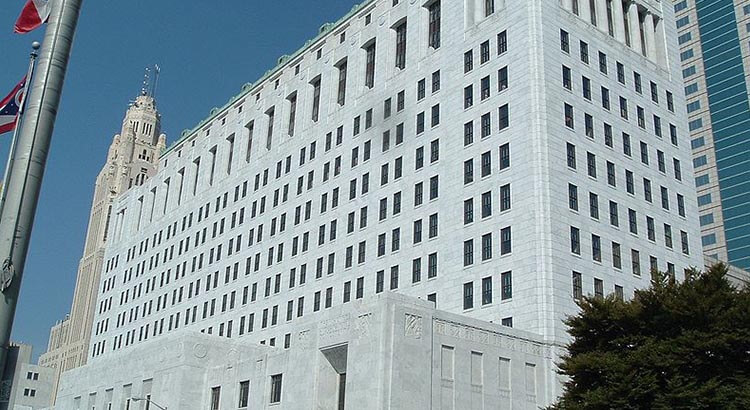 A college student who gave birth in a sorority house bathroom and was convicted of murder after throwing the baby away will receive a new sentencing hearing, the Ohio Supreme Court ruled on Thursday.

Emile Weaver is afforded a new hearing after a trial court’s denial of a post-conviction petition was “unreasonable and arbitrary and not based on competent and credible evidence,” Chief Justice Maureen O’Connor said in the 4-3 majority opinion.

The case stems back to 2014, when Weaver was a student at Muskingum University, and living in a campus sorority house. After going to a campus wellness center for birth control, the center said they reached out to tell her she was pregnant.

Weaver said she didn’t read the message from the center, and didn’t “completely’ believe she was pregnant because she did not show symptoms or stop menstruating during the process.

It wasn’t until April 2015 that she used the bathroom, and realized she was in labor, according to court records.

She delivered the baby, and two fellow sorority members said they found a trash bag lying next to the sorority house with the baby inside.

In 2016, Weaver was convicted of aggravated murder, gross abuse of a corpse and two counts of tampering with evidence. She was sentenced to life in prison without parole.

What went missing from her trial was evidence that might have changed that sentence. The woman alleged her original trial counsel was “ineffective” for failing to present evidence about neonaticide, a term for the killing of a child within the first 24 hours of its life. The only mention of the term came as a “causal mention” during trial, that didn’t even include an explanation of the term.

When filing for postconviction relief – a legal strategy used when an individual believes their rights were infringed upon during the court process – Weaver brought forth evidence from law professors and professors who study neonaticide, who called the sentence “disproportionately harsh when compared to sentences given to others convicted of this crime,” especially considering the Weaver’s trial attorneys hadn’t provided “information that would have provided context for understanding (her) crime.”

Dr. Clara Lewis, of Stanford University, told the trial court that women who commit neonaticide “tend to be immature, isolated, worried about the judgment of others on issues ranging from sex to abortion to unwed motherhood” and can go without prenatal care and suffer from “pregnancy denial.”

“Dr. Lewis concluded that Weaver fit the typical personality and demographic profile and her actions followed the typical pattern, noting that Weaver’s social isolation, her immaturity and her boyfriend’s insistence on secrecy during the pregnancy … all reinforced her isolating behavior and denial of the pregnancy,” the Ohio Supreme Court analysis stated.

During a two-day hearing on the post-conviction relief petition, a psychotherapist specializing in women’s reproductive mental health, Dr. Diana Barnes, said neonaticide can be connected with “pregnancy-negation syndrome,” a syndrome that can cause women to “negate and detach from their pregnancies to the point that their bodies respond with fewer and less obvious physical signs of pregnancy.”

The trial judge made a point to say that Barnes held a Ph. D., not an M.D. in questioning her credibility, but the state did not counter her testimony or rebut it.

After the case was appealed to the state’s highest court, the Ohio Attorney General offered an argument, saying the trial court wasn’t “biased or unreasonable” because they rejected the psychotherapist’s credibility, and because of that, ruled Weaver hadn’t proven herself eligible for a new sentence.

The Ohio Supreme Court majority, led by Chief Justice Maureen O’Connor, expressed frustration with the trial court and how it chose to resolve the petition, including the rejection of Barnes’ testimony and the testimony of two members of the sorority.

“Specifically, that the trial court denied her petition based on its biases and personal attitude toward the evidence, rather than based on a reasoned application of the standard for assessing ineffective-assistance-of-counsel claims,” the majority wrote.

Justice Patrick DeWine dissented to the majority, joined by Justices Sharon Kennedy and Patrick Fischer. In disagreeing with the ruling, DeWine said even if the evidence wasn’t discredited, “the evidence still fails to establish that she was deprived her constitutional right to the effective assistance of counsel.”

The majority state supreme court ruled that the case was a “glaring denial of due process” only to be fixed through a new sentencing hearing for Weaver.

Because of the choices made by the trial judge, the majority ruled that a new judge be assigned to the case before sentencing occurs.