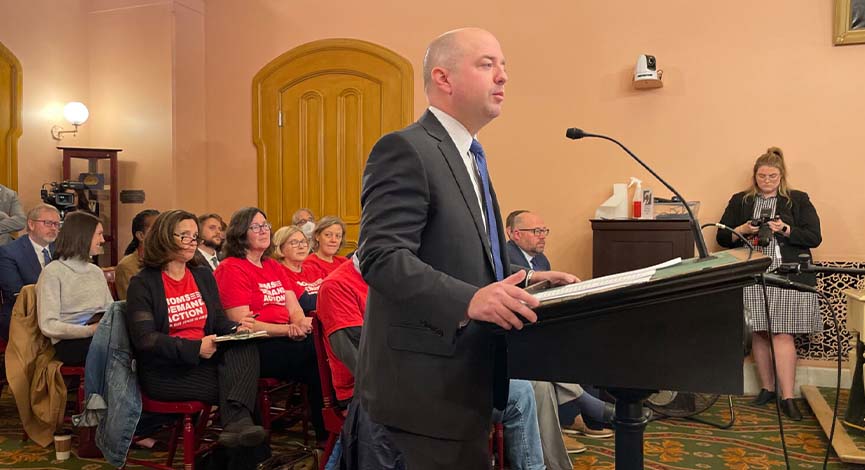 Ohio Republican lawmakers are laying the groundwork to send a controversial amendment to voters next May. The proposal, which would raise the threshold for future constitutional amendments, got its first committee hearing Thursday.

Rep. Brian Stewart, R-Ashville, stood alongside Secretary of State Frank LaRose less than two weeks ago to introduce the proposal. Since then, more than 140 organizations have lined up in opposition to it. Their initial plan established a 60% threshold for passage of citizen-led constitutional amendments. On Thursday, lawmakers amended the measure to apply the same standard to amendments offered through the state legislative process as well.

The rapid timeline is reminiscent of lawmakers’ rollout of Issue 1, the cash bail amendment on the ballot last November. Despite the bill getting its first hearing Thursday, Stewart voiced confidence about clearing the 60% threshold for passage, “as long as we have enough people not sick in the House.” Wednesday, Senate President Matt Huffman expressed approval for the idea and predicted it would pass before the end of the year.

Stewart offered many of the same arguments Thursday that he and LaRose made when they announced the idea last month.

“For far too long,” he said, “Ohio’s Constitution has been far too susceptible to efforts by outside groups and special interest seeking to alter the people’s constitution to achieve their ends.”

Stewart argued the proposal is aimed at long-term good governance — not kneecapping liberal ballot initiatives in the coming years.

If the stream of questions he got Thursday is any indication, Statehouse Democrats aren’t buying that.

Rep. Bride Rose-Sweeney, D-Cleveland, flipped Stewart’s concerns about bare majority rule on its head, noting his proposal empowers 40% plus one instead. Others asked Stewart to identify which special interests he objected to “buying” their way into the constitution. The only specific examples he cited were a 2009 casino amendment and a 2015 recreational marijuana initiative. Both sought to establish state monopolies, but only the former actually passed. Instead, in 2015 voters approved a competing amendment making it more difficult to establish a monopoly through the ballot box.

“We’re not trying to make amending the Constitution impossible,” Stewart insisted. “We’re simply trying to require that you — in a diverse state of 11-plus million people — that you get more than 50% of the 25% that might show up to vote in a sleepy May primary.”

That argument is a bit of a red herring, though. Citizen-led amendments can’t show up on a primary ballot — they have to wait for a general election. Lawmakers, however, get to choose. Should Stewart’s joint resolution pass, as it seems likely to do, it would appear on the primary ballot next May.

Lawmakers advancing an amendment on that timeline is not the norm. Voters regularly consider amendments in odd numbered years, but those votes nearly always come during the general election, rather than the primary.

According to Secretary of State data, the last time lawmakers proposed an amendment on an odd year primary ballot was 1973.

Thursday’s hearing only dealt with Stewart’s testimony and questions from fellow lawmakers but advocates critical of the bill crowded the hearing room all the same. Speaking afterward, Catherine Turcer of Common Cause Ohio acknowledged the last-minute changes as an improvement.

“I do think it was important for them to remove the hypocritical portions,” she said. “You know if they’re gonna say 60% for citizen initiatives, well, they have to say 60% for legislative initiatives.”

But she argued Stewart is misreading the work of Ohio’s Constitutional Modernization commission. Stewart repeatedly held up a proposal offered by one of its committees as an example of his idea’s historic precedent.

“They saw it as a package,” Turcer said. “We should make it easier to do the state legislative initiatives to encourage folks to take this route, and we’ll make it a little bit harder, you know, 55% to do constitutional amendments — you couldn’t separate them out.”

Katy Shanahan with the Equal Districts Coalition seized on the effort’s timing — questioning the rapid pace and the target election.

“Representative Stewart even himself today admitted that primary elections have low voter turnout, and that we needed to protect special interests from taking advantage of those low voter turnout primaries to amend our constitution,” she said.

“And yet that’s literally what they’re proposing to do.”

Shanahan said the changes would foreclose an opportunity for ordinary people to effect policy.

“Not because there isn’t public support for it,” she said, “but because we can’t make it through our gerrymandered legislature.”

“Ultimately,” she added, “every time I hear them say special interests, that to me actually just means the people of Ohio.”