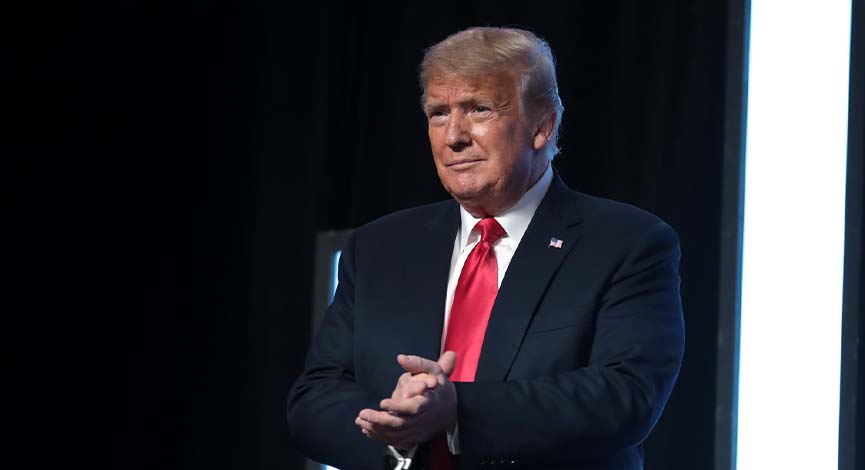 What does it take for Ohio’s Republican leaders to say they won’t support Donald Trump? Apparently dining with people who deny the Holocaust and express affection for Nazis — and Trump’s own call for the “termination” of the Constitution — aren’t enough.

Since Trump’s Nov. 22 dinner with Ye and Nick Fuentes and his Dec. 3 Constitution-abrogating social media post, the chorus of Republican elected officials declaring they won’t support him in 2024 hasn’t been very audible.

You might expect that with a Secret Service detail and other staff, a former president might, at a minimum, know in advance who he is to have dinner with. But Trump claimed he “had never met and knew nothing about” Fuentes, a longtime white nationalist who has questioned whether the Holocaust ever happened by comparing it to cooking 6 million cookies.

In the same statement, the former president said the plan was for him to have a dinner consisting of “Kanye and me only,” referring to the rapper formerly known as Kanye West, but who now goes by Ye.

Even before the dinner, Ye had engaged in months of increasingly antisemitic rhetoric. Shortly after the dinner, Ye went full fascist in a Dec. 1 interview, declaring “I like Hitler,” and “I love Jewish people, but I also love Nazis.”

Trump still hasn’t broken with Ye over the statements.

And on Dec. 3, he posted a statement on his social media platform that is anathema to an abiding belief in constitutional democracy: “A Massive Fraud of this type and magnitude allows for the termination of all rules, regulations, and articles, even those found in the Constitution.”

All of which is more than a little distressing — especially in a week when we celebrate Pearl Harbor Day and almost two years after a Trump-inspired mob attacked Congress in an attempt to overturn the 2020 election.

On Dec. 7, we mark the start of a cataclysmic war against Hitler in which almost a half-million American soldiers died fighting to protect our rights under the Constitution. Also, while Ye might admire Hitler, he was a nihilistic dictator who started a war of aggression that ultimately killed as many as 85 million people, almost 8 million of them his own citizens.

Instead of forcefully condemning Ye, Fuentes, Hitler, and Nazism in all its forms, Trump instead repeated lies about his loss in the 2020 election and called to terminate “all rules, regulations, and articles” found in the Constitution.

Many elected Republicans are said to be seething at Trump over his endorsements of questionable candidates that contributed to worse-than-expected outcomes in the November midterms and in Tuesday’s Georgia Senate runoff. And a few, including Senate Minority Leader Mitch McConnell, R-Ky, appear to be questioning Trump’s fitness for a 2024 run.

“First, let me just say that anyone seeking the presidency who thinks that the Constitution should somehow be suspended or not followed seems to me would have a very hard time being sworn in as the president of the U.S.,” McConnell said Tuesday, according to U.S. News and World Report.

And when CBS “Face the Nation” moderator Margaret Brennan on Sunday asked U.S. Rep. Mike Turner, R-Ohio, if he condemned Trump’s call to terminate the Constitution, Turner was unequivocal.

“Absolutely,” he said, according to The Hill. “And I believe, answering your question, that people certainly are going to take into consideration a statement like this as they evaluate a candidate.”

But as they did during Trump’s presidency, many other Republican officials seemed loathe to get on his base’s bad side, no matter how antisemitic his friends or anti-constitutional his statements.

U.S. Rep. Dave Joyce, R-Ohio, on Sunday was asked on ABC’s “This Week” if he planned to support Trump if he was the 2024 nominee. After bobbing and weaving a bit, Joyce said, “It’s early. I think there’s going to be a lot of people in the primary … [but] I will support whoever the Republican nominee is,” ABC reported.

Representatives only of DeWine and Portman responded. And they didn’t answer the question about future political support.

“Antisemitism is vile and repugnant. Governor DeWine condemns antisemitism in all its forms,” DeWine Press Secretary Dan Tierney said in an email. “Governor DeWine is focused on his second term, preparing his next budget, and his efforts to help all Ohioans live up to their God-given potential. He has not engaged in any 2024 speculation, nor is now the appropriate time to do so.”

“It was wrong and inappropriate to have that meeting, white supremacy has no place in our nation’s culture and it’s antithetical to anything we stand for as Americans,” it said.

But Timmons also wouldn’t say if Portman would forswear Trump in 2024.

“He has also said he expects there to be many qualified candidates who enter the race and looks forward to assessing all of them at the appropriate time,” Timmons said in an email.

Matt Keyes, a spokesman for the Ohio Democratic Party, said that in refusing to publicly withdraw support from Trump, state GOP leaders are being disloyal to their own constituents.

“It’s clear where the loyalties of GOP politicians in Ohio lie: with the extreme MAGA Republican movement and not with the people of Ohio,” Keyes said in an email. “It’s time for these politicians to put people over politics and finally denounce the dangerous rhetoric being spewed from the former president.”