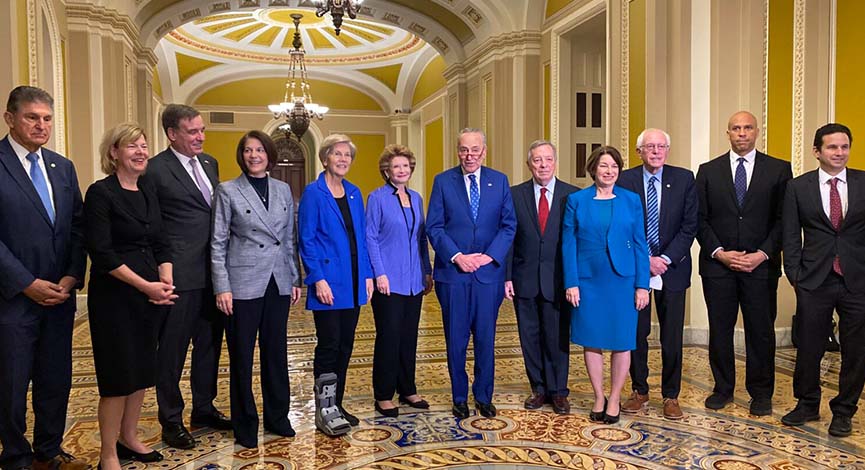 U.S. Senate Democrats on Thursday elected their leadership for their new 51-seat majority in the upcoming 118th Congress, elevating two Midwesterners — Michigan’s Debbie Stabenow to the No. 3 slot and Minnesota’s Amy Klobuchar to the No. 4 role.

Stabenow, chair of the Democratic Policy and Communications Committee, and Klobuchar, chair of the Steering Committee, will continue holding the same titles they have this Congress, but will be elevated in the rankings under new changes.

Klobuchar said after the closed-door vote that how she approaches her role in leadership will change a little given Democrats increasing their majority by one member next Congress and Republicans moving into the majority in the U.S. House. Democratic Sen. Raphael Warnock won a runoff reelection race in Georgia on Tuesday, giving Democrats a 51-49 advantage over Republicans.

“Part of my job with Steering is to reach out to Republican leaders as well, and make sure we’re steering a good course to get things done. That’s not going to change,” she said. “But, I think, with our newfound spring in our feet with our vast majority of one, I am hopeful we can get even more done.”

Klobuchar said that she and other Senate Democrats have plenty of experience negotiating bipartisan deals following two years in an evenly divided Senate, a skill that could prove useful when Republicans take over the House on Jan. 3.

“Remember, we just got through a 50-50 Senate — we know how to negotiate,” Klobuchar said.

Stabenow said she plans to keep bringing Senate Democrats together around policy decisions and communications, though she said Congress could change with the GOP in charge of the U.S. House.

“I think the House has a choice to make,” Stabenow said. “They can go the way of investigations and trying to find a reason to impeach the president, and for extreme policies, like ending Medicare or Social Security. Or they can choose to work with us to get things done.”

Stabenow said the election results show that Americans want Republicans and Democrats to work together “to get things done that make their lives better.”

Schumer said, as the new slate of Democratic leaders was taking a photo following the vote, that the group represents a “great, diverse, hard-working, effective leadership team.”

“We had a great, unified meeting, where we were both very glad about what we were able to accomplish in the last Congress and setting strong aspirations that we will accomplish as much in the next two years,” Schumer said.

Washington state Sen. Patty Murray currently holds the No. 3 spot as assistant Democratic leader, a role that’s being eliminated in the rankings for the next Congress.

Murray decided ahead of the leadership vote Thursday she would step aside from leadership next year when she becomes the chair of the Senate Appropriations Committee, the panel tasked with approving more than $1.5 trillion in government spending annually, and the president pro tempore, a role that will place her third in the presidential line of succession behind the vice president and the speaker of the House.

The president pro tempore slot is typically held by the longest-serving member of the majority party, which would be California Sen. Dianne Feinstein, though she’s decided not to claim that position.

Senate Democrats didn’t announce who will run the Democratic Senatorial Campaign Committee heading into the 2024 election, when Democrats will face a challenging map with seats up for reelection in Montana, Ohio and West Virginia.

Michigan Sen. Gary Peters chaired the DSCC for the most recent election cycle, when Democrats picked up one seat.

House Democrats voted last week to name Hakeem Jeffries, of New York, as their leader, Katherine Clark, of Massachusetts, as whip, and Pete Aguilar, of California, as caucus chairman. All three ran uncontested.

The new leaders will step into their roles next year when Speaker Nancy Pelosi, Majority Whip Steny Hoyer and Jim Clyburn step aside from the top three leadership roles, though they will remain in Congress.

House Republicans voted last month to nominate California Rep. Kevin McCarthy as their selection for speaker, though he won’t be able to claim the gavel next Congress unless he can get at least 218 House lawmakers to vote for him during a floor vote on Jan. 3. Louisiana’s Steve Scalise, House GOP whip since 2014, will become majority leader.