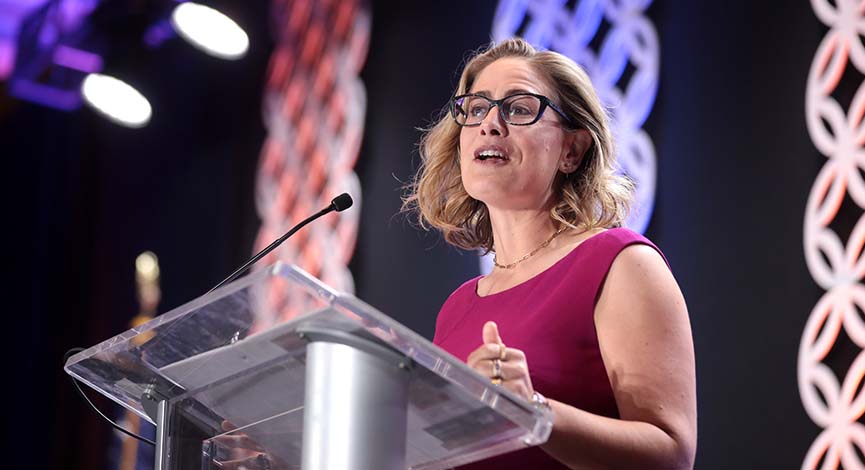 U.S. Senator Kyrsten Sinema, of Arizona, speaking with attendees at the 2022 Update from Capitol Hill hosted by the Arizona Chamber of Commerce & Industry at the Arizona Biltmore in Phoenix, Arizona on Apr. 12, 2022. (Photo Credit: Gage Skidmore / Flickr. Licensed under Creative Commons BY-SA 2.0)
ShareTweet

U.S. Sen. Kyrsten Sinema of Arizona announced Friday she is leaving the Democratic Party and has registered as an independent.

The first-term senator wrote in an opinion piece for the Arizona Republic that she does not intend to change the way she legislates or casts votes, but plans to be “an independent voice for Arizona.”

“​​When politicians are more focused on denying the opposition party a victory than they are on improving Americans’ lives, the people who lose are everyday Americans,” she wrote in the op-ed. “That’s why I have joined the growing numbers of Arizonans who reject party politics by declaring my independence from the broken partisan system in Washington.”

Democrats this week had celebrated their growth to a 51-seat majority in the next Congress, a number that already included independents Bernie Sanders of Vermont and Angus King of Maine, who normally vote with Democrats. The 51st seat was gained in a Senate runoff election in Georgia when Democrats kept U.S. Sen. Raphael Warnock’s tightly contested seat.

“I’ve never fit neatly into any party box. I don’t want to,” she said on CNN. “Removing myself from the partisan structure — not only is it true to who I am and how I operate, I also think it’ll provide a place of belonging for many folks across the state and the country, who also are tired of the partisanship.”

“Senator Sinema informed me of her decision to change her affiliation to Independent,” Senate Majority Leader Chuck Schumer said in a statement Friday. “She asked me to keep her committee assignments and I agreed. Kyrsten is independent; that’s how she’s always been. I believe she’s a good and effective Senator and am looking forward to a productive session in the new Democratic majority Senate. We will maintain our new majority on committees, exercise our subpoena power, and be able to clear nominees without discharge votes.”

Sinema’s spokesperson pointed out Friday morning that during Sinema’s interviews with news organizations, “she made clear she intends to maintain her committee assignments from the Democratic majority.”

The aide also noted that Sinema “has never attended caucus meetings and will not moving forward.”

Sinema, 46, was first elected to the U.S. House in 2012 before successfully running for the U.S. Senate in 2018, winning with just 50% of the vote over Republican Martha McSally.

The two were separated by 56,000 ballots out of nearly 2.4 million cast in that race.

Sinema’s decision to move away from being formally registered as a Democrat comes ahead of her first reelection campaign for the U.S. Senate during the 2024 cycle. She has not announced whether she intends to run again.

Sinema became a central negotiator during the 117th Congress on several significant bills, including Democrats’ climate change, health care and tax package they passed without Republican support this summer.

She was also part of the small group of senators who worked on the bipartisan infrastructure law Congress passed last year and worked with a handful of colleagues to draft the religious liberty language that was added to the marriage equality bill before it passed the Senate last month.

White House Press Secretary Karine Jean-Pierre said in a written statement that Sinema “has been a key partner on some of the historic legislation” that President Joe Biden and Democrats have enacted during this Congress.

“We understand that her decision to register as an independent in Arizona does not change the new Democratic majority control of the Senate, and we have every reason to expect that we will continue to work successfully with her,”  Jean-Pierre said.

This story was republished from the Nevada Current under a Creative Commons license.