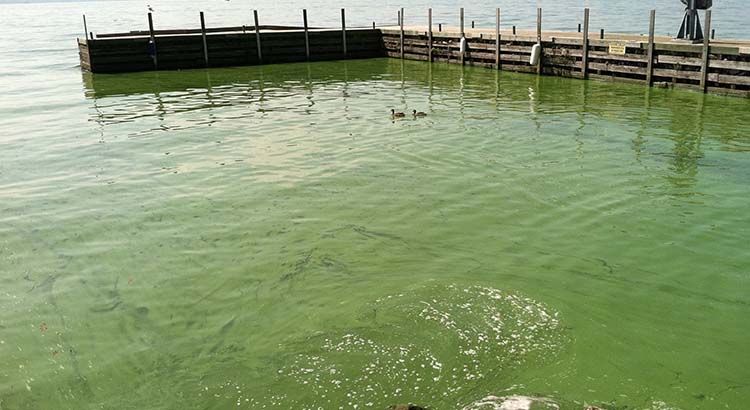 A voluntary, state-run program is paying dividends by reducing the amount of fertilizer that is running off into Ohio waterways and causing harmful algal blooms, a new economic analysis said. Expanding the program would only expand the benefits, it added.

Especially in northwestern Ohio, fertilizer has washed off of farm fields and into the shallow Western Basin of Lake Erie. There, the extra load of nutrients bathing in warm water has had devastating consequences.

In August of 2014, a huge, toxic algal bloom deprived Toledo of drinking water for three days before migrating east to afflict island communities there. The blooms don’t only produce stench and toxins, they also create dead zones by consuming the oxygen in the water and suffocating some aquatic creatures while driving away others.

To get a handle on the runoff, Ohio, Michigan and Ontario in 2015 entered into the Western Basin of Lake Erie Collaborative Agreement with the goal of reducing phosphorus running into the lake by 40% compared to 2008 levels by 2025.

In part to meet that goal, Ohio Gov. Mike DeWine in 2019 established the H2Ohio program. As part of that, the program offered farmers money to voluntarily participate in nutrient management plans.

“Ohio has supported many programs to help farmers reduce nutrient loss over the years, but the state hasn’t done nearly enough, nor have previous plans focused enough, on reducing phosphorus runoff from agriculture,” DeWine is quoted as saying in materials announcing the program. “That changes now.”

The program appears to have had some success. A cost-benefit analysis released Monday by Scioto Analysis said that while 3,500 tons of phosphorus flowed into the Western Basin of Lake Erie annually between 2011 and 2020, the state reported that the H2Ohio program removed 100 tons of phosphorus from the basin in 2022.

The analysis sought to estimate what additional benefits there would be if the program were expanded to the rest of the state, most of which flows into the Ohio River watershed. In addition, the analysis looked at what would happen if in the counties currently eligible, the maximum state subsidy for participation were raised from the current $10 an acre to $20 or $40.

Keeping the per-acre subsidy at $10 and making it available in all 88 counties yielded by far the biggest benefit, according to the analysis. It would remove 253 tons of phosphorus a year and be worth $13 million a year, the analysis said.

“We found that the H2Ohio program has been successful in reducing nutrient load in a cost-effective manner,” Michael Hartnett, an analyst who helped produce the report, said in a statement accompanying it. “Assuming farmers across the state apply nutrients in similar ways and that reductions would be comparable, offering the same subsidy to farmers in every county could provide millions of dollars worth of benefits to Ohioans.”