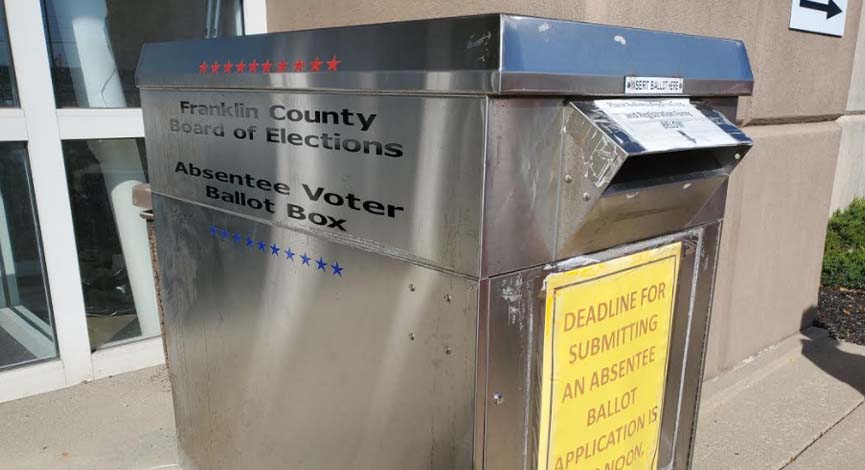 Pictured is a Franklin County Board of Elections drop box. Photo by Tyler Buchanan, OCJ.
ShareTweet

Voting rights groups are raising concerns with two voting bills Ohio Republican lawmakers appear poised to advance during the lame duck session: One for photo voter ID, and the other to limit drop boxes and absentee voting.

In the Ohio House, lawmakers are working on a proposal that places limits on drop boxes, absentee voting, and rejiggers the early vote schedule. Advocates were initially optimistic because that proposal included an automated voter registration component. That change would keep voters’ information up to date whenever they interact with the BMV. Last week, sponsors removed those provisions.

One point of contention with the voting bills has to do with the early vote schedule. All Voting is Local state director Kayla Griffin criticized plans to eliminate the final day of early voting. She cited an America Votes analysis of the 2020 election.

“We had over 30,000 people close to 31,000 people who voted on Monday before Election Day,” she said. “That’s a really high number, and we really think it’s important for folks to be able to continue to vote.”

“The fact that this early vote calendar is constantly having different sets of hours creates a lot of confusion and frustration among voters,” Miller explained. “It also really puts a burden on elections officials and boards of elections, who are trying to educate voters when the early vote center is actually open.”

The voter ID proposal pairs strict limits with free photo IDs for those who don’t want a drivers license. But those restrictions are still onerous. People with an out-of-state driver’s license can’t use that ID to vote. They can’t get one of the free IDs either.

Ohioans who have moved recently could be in trouble, too. If the address on the driver’s license doesn’t match the voting address, they’d need a document like a utility bill.

Collin Marozzi from the ACLU of Ohio argued the address match requirement will expand the number of people impacted “exponentially.” In passing he noted his current license wouldn’t qualify because of a recent move.

More frustrating to Marozzi, however, is that the measure attempts to stamp out a problem that doesn’t exist. He explained strict ID requirements would stymie voter impersonation, but of the cases of potential fraud the Secretary of State has identified, impersonation doesn’t come up.

“There have been zero cases of potential voter impersonation that Secretary of State LaRose has identified and referred to the attorney general,” Marozzi said. “So when we’re talking about strict voter ID, and how that promotes election integrity and voter fraud, the numbers here just don’t add up to that.”

Zach Roberts from the Ohio Veterans Network, criticized the Senate proposal for reducing military IDs to a secondary form of identification. Under the bill they could bolster an expired driver’s license, but they’re unable stand on their own.

“My military ID was good enough to use in previous elections,” he said. “I’m wondering why now Senate Bill 320 lowers its value insofar as making it not something I can use when I enter a polling location.”

Although his military ID doesn’t show his current address, Roberts noted other service-related IDs like a military spouse ID or a veterans ID do carry that information. None of those would be valid under the bill’s provisions.