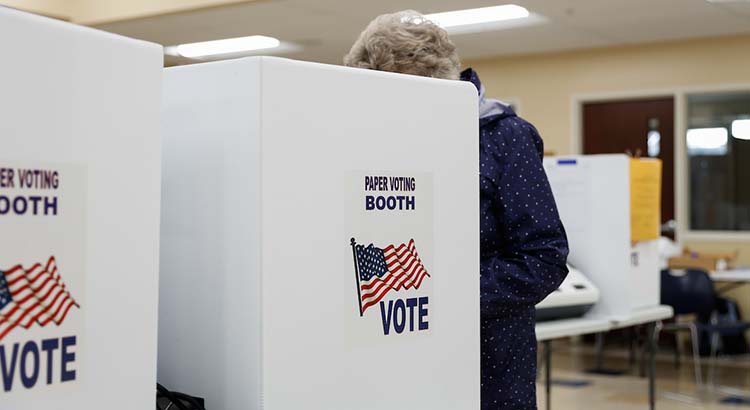 “I think the biggest threat [to democracy] will be if the exhausted majority is too tired to get engaged. I think that’s a threat: Good people doing nothing or good people sitting on the sidelines.” – Tim Ryan, Democratic candidate for U.S. Senate in Ohio.

History is replete with examples of good people doing nothing while bad things happen. But apathy never absolved those who stood aside for inhumanity. And apathy will not absolve those who allow authoritarianism to replace American democracy by doing nothing on Nov. 8. Voter turnout next Tuesday will make or break the country. No hyperbole.

Control of Congress, state legislatures, state supreme courts, governors’ offices and more will be decided by which voters are motivated to show up for the election. Exhausted and disengaged voters who stay home will hand power to the party that brings passion and higher voter percentages to the polls. The only pro-democracy party in America right now is struggling to motivate an apathetic electorate. That’s alarming.

Democrats must convince more voters what they stand to lose in liberties by not casting a ballot. Republicans must convince enough voters that Democrats are socialist, Marxist, Communists who coddle criminals. The rest of us must convince each to reject the defeatist mantra — “What difference will it make?” — that keeps good people from voting on Election Day.

The votes of democracy-loving Americans mattered in 2018 and most certainly in 2020. In 2022, history will record how we mattered at this crucial moment for self-governance. Will we be too tired of the draining political insanity to get engaged, or will we rise up against the minority rule promised by anti-democratic disciples walking in lockstep with a vindictive narcissist? That’s the choice in this election.

Gas prices will come down. Inflation will drop eventually. But once democracy ends in America, it’s not coming back. Once an authoritarian ushers in an American Third Reich with loyalists at all levers of power, our grand experiment in representative government is over. My friends, we are an election away from that existential hour.

The midterms will bring us closer to the precipice of no return. How much closer is anyone’s guess. But a Washington Post analysis studied a majority of Republican nominees on the ballot this year who either deny or question the 2020 election results in sync with the false narrative  spewed by a twice-impeached ex-president. Many of those Republican election deniers running for office will win.

In Ohio, four GOP congressman who voted to reject millions of legitimate American votes in the last presidential election — in an effort to overturn the certified outcome and steal the election for the defeated candidate — are poised to return to Congress. Jim Jordan, a central player in the lead-up to the Jan. 6 insurrection, Bill Johnson, Steve Chabot, and Warren Davidson pledged their fealty not to country but to a man who is a manifest threat to it.

But Ohio’s election deniers, who include Republican Attorney General Dave Yost and J.D. Vance, the Republican nominee for Ohio’s U.S. Senate seat, willingly and dangerously continue to undermine trust in free and fair elections — the bedrock of our democracy — to stay in the good graces of a sore loser and the cult of followers he commands. For these politicians, lying to delegitimize elections and weaken the democratic foundations of our country is a calculated means to gain power.

So they promote the stolen election charade, recklessly sowing seeds of distrust and civil strife in an elections system deemed the most secure in American history after the 2020 election by Trump’s own cyber-security chief. Some election-denying candidates are cagey about whether or not they’ll accept the result of the upcoming election if they lose. I guess imitation is the sincerest form of flattery to a fascistic leader who refused to accept the result of his defeat.

Vance, who shred any reputation he might have had as an intellectually honest conservative to grovel before a “reprehensible” mogul he once compared to Hitler, will welcome his fuehrer to Ohio as a campaign closer on the eve of next week’s election. The Peter Thiel bought-and-paid-for candidate has also campaigned with Trumpian apparatchiks as crazy as Q-Anon Marjorie Taylor Green and as pliably pathetic as Ted Cruz and Lindsey Graham.

These are the MAGA enablers doing whatever it takes to consolidate power behind America’s worst nightmare. They aim to exert absolute rule on an exhausted majority. If you’re okay with that, with a despotic minority deciding what’s good for you, what religion you believe, what rights you have, the extremists who deem political violence justifiable and Putin admirable, who empower racism, antisemitism, overt misogyny and outright bigotry — then don’t show up on Election Day.

But if that America is unrecognizable to you, get off the sidelines and get engaged. Come to the aid of your country, an imperfect but indispensable democratic republic on life support. It’s now or never.

History is watching. Vote while you still can.