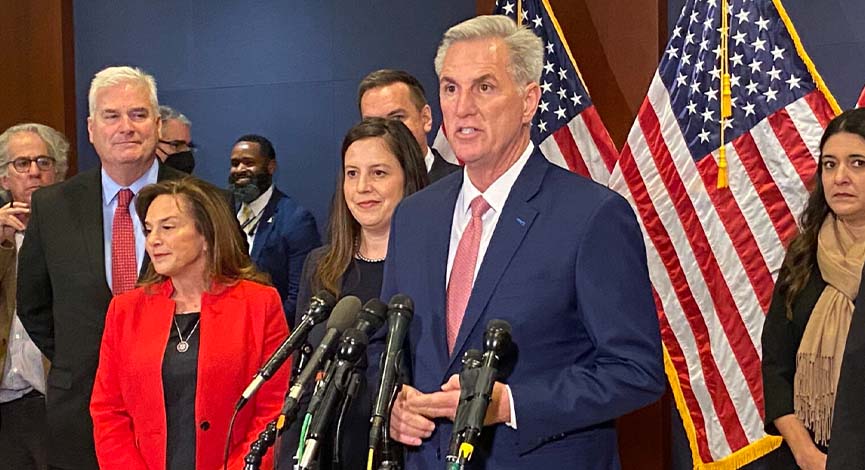 Rep. Kevin McCarthy, Republicans’ nominee for speaker for the 118th Congress, and the House GOP leadership team for the next session talk with reporters after the party held its leadership elections on Tuesday, Nov. 15, 2022. Photo by Jennifer Shutt/States Newsroom.
ShareTweet

U.S. House Republicans elected their slate of leaders for the 118th Congress on Tuesday, even though the party hadn’t yet secured the seats needed to take the majority come January.

Emmer won out over his colleagues on the second ballot count, securing the job that will be crucial in what is likely to be a razor-thin Republican majority.

California Rep. Kevin McCarthy fought off a challenge from the right by Arizona Rep. Andy Biggs and is on track to become the next speaker, assuming he can secure the votes needed to officially clinch the gavel during a floor vote in January.

Louisiana’s Steve Scalise, House GOP whip since 2014, will become Republican leader, following an uncontested campaign for the No. 2 role.

The Associated Press had called 217 races for House Republicans as of Tuesday afternoon, even as the House GOP voted for leaders behind closed doors, still short of the 218 they’ll need to control that chamber.

With Democrats in control of at least 206, a Republican majority would be especially narrow, making the GOP leadership crucial to how the party balances the goals of conservative and centrist members.

Support for Biggs a signal

McCarthy secured the majority of Republican votes needed during Tuesday’s party elections to become their nominee, but several members of the party’s right flank voted for Biggs to signal McCarthy doesn’t yet have the backing needed to actually become speaker.

The tally was 188-31, according to an individual familiar with the situation who was not authorized to speak publicly about the results of the closed-door, secret ballot election.

McCarthy said following the vote that he’s confident he’ll get the votes needed to become speaker during the floor vote and that he’s not planning on seeking out Democratic votes.

McCarthy also indicated governing with such a narrow majority would be challenging.

“We know our job will not be easy,” McCarthy said, adding that Republicans will have to work together.

McCarthy becoming speaker would cap off years of climbing the ranks of the House Republican Conference and jockeying for the position, first becoming whip in 2011 before moving to Republican leader in July 2014.

Scalise said he looks forward to bringing bills to the floor that would address inflation, border security, crime rates and education.

“We’re going to make Congress work again — not only ending proxy voting where people can show up to vote, but where the committees meet in person, again, to debate things that are important to the hard-working families who are struggling under this Biden agenda,” Scalise said during a press conference Tuesday evening.

Minnesota’s Emmer secured the votes needed to become the next House GOP whip, defeating Indiana’s Banks and Georgia’s Ferguson. The first ballot vote tally was 82 for Banks, 72 for Emmer and 71 for Ferguson, bumping him off the next vote count. Emmer won the second ballot with 115 votes to Banks’ 106 votes.

Emmer joined the U.S. House in 2015 and was elected as chairman of the National Republican Congressional Committee for the 116th Congress as well as this Congress. Emmer sits on the House Financial Services Committee, in addition to being a member of the deputy whip team and the House Republican Steering Committee.

Emmer said during the press conference after the vote that he’s “excited to be in the majority.”

“We will be the only check on the Biden administration in a Democratic controlled Senate over the next two years,” Emmer said.

Idaho Rep. Mike Simpson said before voting began that it will be difficult for Republicans to run the House with their expected narrow majority, though he thinks lawmakers will unify over time.

U.S. Senate Republicans were on track to hold uncontested leadership elections Wednesday, but Florida Sen. Rick Scott launched a bid against Mitch McConnell on Tuesday afternoon, following a failed bid by Republicans to wrest the majority away from Democrats. Democrats are now projected to have at least 50 seats in the Senate even prior to a Jan. 6 runoff in Georgia.

It wasn’t immediately clear whether the Senate GOP Conference would delay the majority leader vote now that there is a race.

Scott tweeted a link to a Fox News article that said he wrote in a letter, which was released while the Senate GOP huddled behind closed doors Tuesday afternoon, that he believes “it’s time for the Senate Republican Conference to be far more bold and resolute than we have been in the past.”

“Regardless of who we choose to be Republican Leader, I believe that we should treat this as a job interview and demand anyone running for a position of leadership in our conference to be transparent and explain why they deserve our support,” Scott wrote.

Scott had been among a handful of GOP senators who had indicated they wanted to delay the vote until after the Georgia Senate runoff race, though no one had publicly indicated they’d challenge McConnell for the role of minority leader until Tuesday afternoon.

The Kentucky Republican became the party’s leader in the Senate in 2007 and has remained at the top ever since, holding the title of minority leader during five Congresses and the majority leader role during three sessions. He was whip from 2003 to 2007.

McConnell said Tuesday afternoon that he was confident he has the votes to continue on as Republican leader, saying it’s just a matter of whether the vote is Wednesday or later.

“I think the outcome is pretty clear,” McConnell said. “I want to repeat again, I have the votes, I will be elected. The only issue is whether we do it sooner or later. And I think we’ll probably have another discussion about that tomorrow.”

South Dakota’s John Thune is expected to continue as Republican whip, a role he first took over in 2019 following Texas Sen. John Cornyn, who was term limited in that position. That race was still uncontested as of Tuesday evening.

House Democrats won’t hold their leadership elections until Nov. 30, a timeline that gives current party leaders a while longer to decide if they want to seek reelection, or step aside.

Speaker Nancy Pelosi is expected to announce whether she’ll continue on as the chamber’s top Democrat next Congress after the country learns the outcome of the remaining uncalled elections.

The California Democrat has spent more than two decades in leadership, becoming the whip in 2001 before moving up to minority leader in 2003. She then made history as the country’s first female speaker in 2007 and has remained the chamber’s top Democrat ever since.

Pelosi previously indicated this would be her last Congress as the lead Democrat in the U.S. House, though it’s unclear if she’ll retire from that role.

Pelosi said Sunday on CNN’s “State of the Union with Dana Bash” that her decision will “be rooted in” the wishes of her family and those of House Democrats, later saying “there are all kinds of ways to exert influence.”

The “Speaker has awesome power, but I will always have influence,” Pelosi said.

If Pelosi does step aside from the top Democratic role, it’s unclear if anyone would challenge Hoyer for the role of leader or Democratic Whip Jim Clyburn, should they decide to remain where they are.

If Democrats move to the minority, those would be the top two slots in party leadership, since they’d no longer hold the speaker’s gavel.