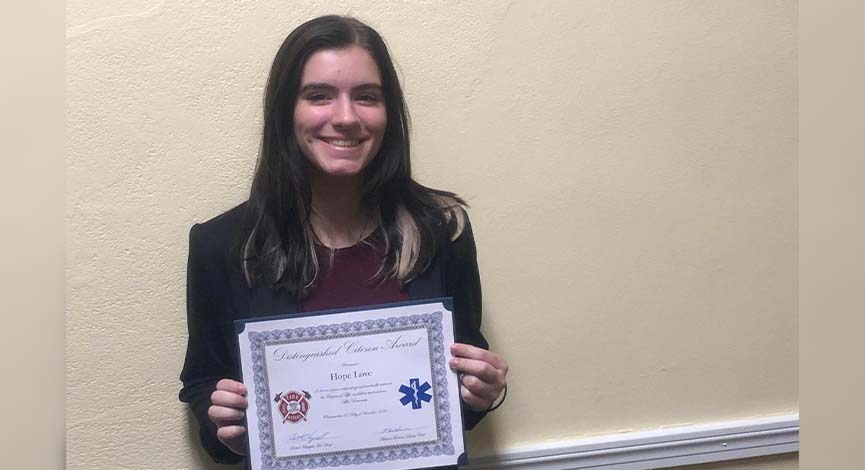 Tiffin, Ohio — Tiffin University student and resident assistant (RA), Hope Love, was recognized by the City of Tiffin and Fire Chief Robert Chappell for her swift and quick actions when a fire broke out in Friedley Residence Hall on the morning of Sunday, Nov. 13.

According to Chief Chappell, Love’s bravery and adherence to emergency protocol saved the day from an event that could have spelled tragedy if improperly handled. Love received an award Monday evening at Tiffin City Hall for her efforts.

At approximately 3:40 a.m., Love awoke to the sound of a student pounding on her door, claiming a fire had broken out in one of the student’s rooms. Though barely awake, she immediately sprang into action.

Thanks to the help of student residents, Taushee Kemp and Shanamarie Richard, who were already alerting others in the building of the threat, Love could focus on the other problem at hand. She sped down the hallway, past the room where the fire began, to grab the nearest fire extinguisher, which was luckily stationed nearby.

“Even though I was still half-asleep in that moment, I knew I couldn’t waste any time,” said Love. “I see my residents as my kids, in a way – they depend on me to look after them and know what to do during a crisis. When I was a kid, my school sponsored a fire safety training day, and in that moment, I remembered the instructor had said that if a fire is any smaller than a standard hoola hoop, it can be taken care of with an extinguisher, so that’s exactly what I did.”

When six firefighters with the Tiffin Fire/Rescue Division arrived less than five minutes after receiving the call, they were pleasantly surprised to find that the immediate problem had already been taken care of. The only work left to be done was to assess the damages and ensure no major injuries were sustained, as well as determine the fire’s cause.

According to their report, the culprit was a blanket that had been touching the room’s radiator. Once caught, the fire spread to a suitcase, the clothes inside and a set of curtains. No injuries were reported and the property damage was minimal.

“Thanks to Hope, the safety and well-being of our students, which is always a top priority, was ensured,” said Tiffin University President, Dr. Lillian Schumacher. “My sincerest gratitude is extended to her, Taushee Kemp, Shanamarie Richard, the Tiffin Fire/Rescue Division, as well as the local police and of course, our wonderful staff. A special thanks to Tiffin University Board of Trustee member, Mr. Lenny Clouse for his assistance as well.”