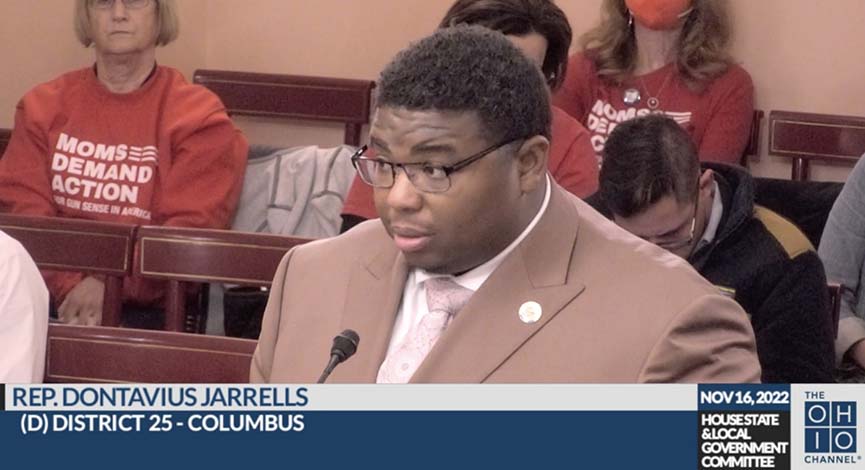 State Rep. Dontavius Jarrells, D-Columbus, speaks to a new proposal to give local control on gun laws in the states. Photo courtesy of the Ohio Channel.
ShareTweet

Ohio Democratic lawmakers are pushing to reestablish local control over gun regulation as well as repeal so-called ‘stand your ground’ in Ohio, though neither bill is likely to become law considering Republican supermajorities.

The two new Democrat-led bills hope to address gun violence happening in urban centers. With Republican supermajorities in the legislature, and bigger supermajorities coming in the new year after elections using maps declared unconstitutional gerrymanders by a bipartisan majority on the Ohio Supreme Court, the bills’ chances of becoming law remain very low.

“As it stands, firearm ownership is an exercise of fundamental individual rights and is protected under section 9.68 of the Ohio Revised Code,” Upchurch told the committee in introducing the bill.

But the law under that section gives those rights without consequences, he and co-sponsor Jarrells argue.

“A governing body must be able to regulate instruments that have the capacity to kill, especially in the plight of mass shootings,” Jarrells said.

As representatives from two urban centers, Columbus and Cleveland, the two say the gun violence their districts have endured has to be stopped, and local municipalities should have the right to make those policy decisions.

“In Cleveland, we’ve had several attempts … to try to implement our own gun policy to reduce the senseless gun violence, but at every measure, it seems that the state will trample on those abilities and take away the municipalities’ ability to create their own gun regulations,” Upchurch said.

State Rep. Sarah Fowler Arthur, R-Ashtabula, brought up the idea of looking at the bill from the side of those wanting to carry firearms to be able to defend themselves.

She warned that local regulation, “if it’s applied differently in Franklin County than Cuyahoga County,” could perhaps create a situation where “a law-abiding citizen legally carrying their firearm might come in the crosshairs” traveling from one jurisdiction to another.

Upchurch and Jarrells both expressed their willingness to work on amendments to the bill, pointing to the uphill battle they’ll face in a Republican supermajority that is growing in the next General Assembly, and has consistently pushed to loosen gun regulations.

“This is a personal one for me, and I understand that there’s multiple angles and sides to this argument,” Jarrells said. “But consensus is what we’re trying to reach because there’s too many lives at stake.”

HB 274 is one of two bills looking to take action on gun control, both under consideration by the State & Local Government Committee.

House Bill 38 doesn’t look to add to legislation, but to take back regulations supported by the GOP.

The bill, sponsored by state Reps. Thomas West and Adam Miller, would repeal changes made to duty-to-retreat laws made in 2020.

“There is no injustice with duty to retreat,” the sponsors said in submitted testimony to the committee. “It worked. It saved lives.”

West and Miller said the proposed legislation is a response to Senate Bill 175, Ohio’s so-called Stand Your Ground law, in which it was made legal to use deadly force even if deadly force was not threatened to provoke the defense.

“Now, every fender bender, every parking lot controversy, every mad rush for this year’s holiday gift, will be ripe for legalized murder,” the sponsors wrote.

As with the local control bill, Miller and West likely face significant opposition in the GOP supermajority General Assembly.