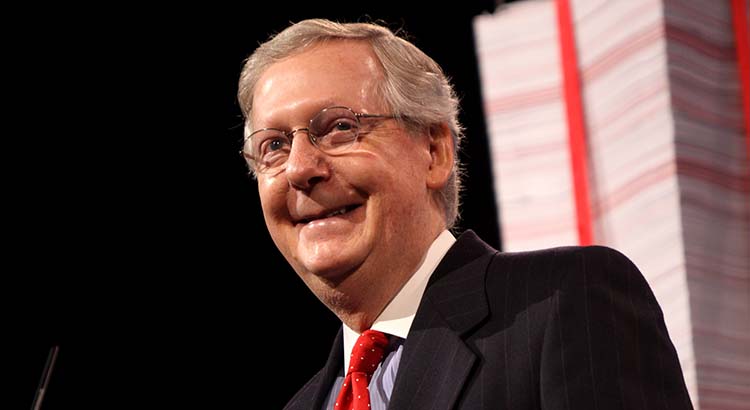 Scott’s bid, which he launched Tuesday during an hours-long discussion among Senate Republicans about the future of their party amid disappointing results in the midterm elections, was considered a long shot. But the Florida senator’s challenge did force Republican senators to debate many of their differences during nearly eight hours of closed-door meetings this week.

The vote Wednesday was 37-10 with one senator voting present, McConnell said.

McConnell signaled during a press conference after the vote that he wouldn’t be changing the way he runs the Senate Republican Conference, saying the party gets together three times a week and has mechanisms in place allowing five members or more to call a conference to discuss issues.

“So we acquainted our members with the tools they have, if they have an idea they want to promote to convene a conference — just five of them for discussion — and I think that’ll be used more often. I certainly welcome it,” McConnell said.

“One of the nice things about being in the Senate as opposed to the House, you don’t have so many people,” he added. “And we’re together a lot and there are opportunities all over the place to float new ideas. I’ve never been opposed to it and won’t be going forward.”

Republicans will remain in the minority next year after Democrats succeeded in maintaining at least 50 seats in the Senate.

Scott and McConnell have had a fraying relationship for quite a while amid disagreements about how Scott handled his role as chairman of the National Republican Senatorial Committee.

But that escalated this week when Scott launched a last-minute, long-shot bid to remove McConnell from the minority leader role.

McConnell, however, said Wednesday that he was “not in any way offended by having an opponent, or having a few votes in opposition.”

“As everyone has said, we had a good opportunity to discuss various differences, people have a chance to listen to both candidates. And I’m pretty proud of 37 to 10,” McConnell said.

Scott released a written statement following the vote, saying “Although the results of today’s elections weren’t what we hoped for, this is far from the end of our fight to Make Washington Work.”

Indiana Sen. Mike Braun said following the closed-door vote that the debate about leadership was “the best conversation” he’s been part of since being elected to Congress.

“It, I think, flushed out kind of what we’re going to be for as a caucus,” Braun said. “And all I can tell you is for the four years I’ve been here, that’s the best three hours that we’ve spent.”

“We’re going to stake out three or four things that we’re really going to put out there to the American public, who seem willing to entertain that, and I consider that an accomplishment,” Braun said. “I think that’s the key thing that we’ve got to be clear about … what are we for and how do we articulate it because I don’t think we’ve ever done that well as a party.”

McConnell has been leading Senate Republicans, through both majorities and minorities, since 2007. Before that, McConnell was the party’s whip from 2003 to 2007.

The other Senate Republican leaders for the 118th Congress ran uncontested.

South Dakota’s John Thune will continue on as whip and Wyoming Sen. John Barrasso will still be conference chair.

Iowa Sen. Joni Ernst will become policy chair, stepping up from her current role of vice chair to the position being vacated by retiring Missouri Sen. Roy Blunt.

“I will be working with all of the members in our conference and presenting different ideas and entailing collaboration. And we heard a lot about that over the past several days,” Ernst said after the vote. “So we want to make sure that all of our voices are heard and their ideas are presented fairly across our conference.”

Daines, who will be in charge of fundraising for the Senate GOP and winning a majority during the 2024 elections, said his “highest goal here is to ensure that we secure a strong, sustainable, lasting majority for the Republicans in 2024.”

“I will tell you that we are fired up, we’re excited, we’re going to hit the ground running,” Daines said during a press conference held just after the closed-door vote.

Senate Republicans began voting on their slate of leaders Wednesday morning after first rejecting a proposal from Texas Sen. Ted Cruz to delay the elections until after the Dec. 6 runoff election in Georgia.

The vote was 16-32 against delay, according to a Senate Republican aide not authorized to speak publicly about the vote.

House Republicans elected their slate of leaders for the 118th Congress on Tuesday, settling several contested races during a series of closed-door, secret ballot votes.

Unlike Senate Republicans, who knew they’d be in the minority next Congress regardless of the outcome of the Georgia runoff, House Republicans hadn’t secured the seats needed to become the House majority during their Tuesday vote session.

“Whether it’s hollowing out Medicare or worsening inflation with tax welfare for rich special interests, Rick Scott’s values are the true face of congressional Republicans — regardless of what happens today,” Bates said. “It’s fitting that the person who epitomizes Hill Republicans’ intentions to gut Medicare and Social Security oversaw the biggest Medicare fraud in American history.”

Senate Democrats plan to hold their leadership elections on Dec. 8, according to an individual familiar with the caucus discussion, who wasn’t authorized to discuss the plans publicly.

During that meeting, Majority Leader Chuck Schumer, a New York Democrat, plans to nominate Washington Democratic Sen. Patty Murray to become President Pro Tempore, a somewhat ceremonial role, though whoever holds it is third in line to the presidency behind the Vice President and the Speaker of the House.

That nomination would need to be approved by the Senate Democratic Conference, according to the person familiar with the plans.