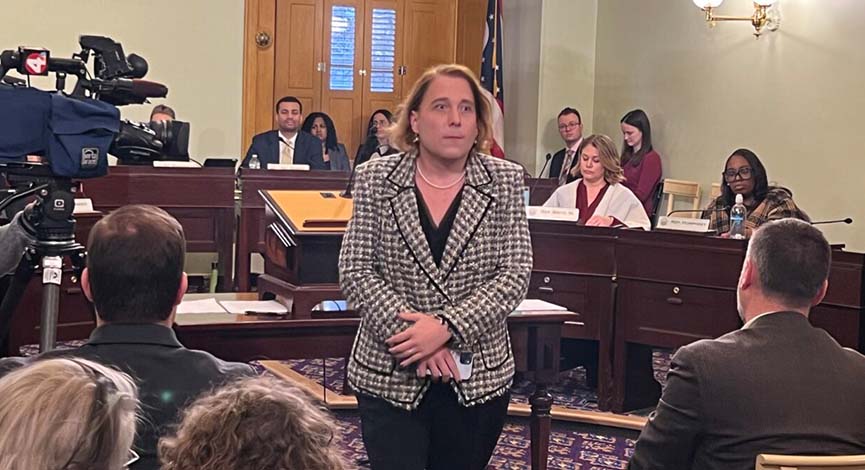 A packed and stuffy Families, Aging and Human Services committee room was flanked by multiple overflow rooms, where applause could be heard after parents, trans advocates and individuals implored the committee not to approve of House Bill 454, a bill created by committee member state Rep. Gary Click, R-Vickery.

One of the testimonies came from Dayton native Amy Schneider, a trans woman who went on to become a Jeopardy! super champion, and has used her platform to support her fellow LGBTQ+ community members.

“To be given the chance in Ohio, where I spent 30 years of my life, to have a chance to make a difference and have a chance to actually, if nothing else, slow down these laws and give trans kids a little bit longer to be safe, then I’ve just got to do it,” Schneider told the OCJ before she gave her testimony to the committee.

In her testimony, she sought not to demonize those who support the bill, but to ask that they do what they claim is the main goal of the bill: protecting children.

“But if you do share that goal, then passing this bill would be a tragic mistake,” Schneider said. “Because far from protecting children, this bill would put some of them in grave danger, a danger that not all them would survive.”

Several of those that testified, including Schneider, called gender-affirming care “life-saving” care, in that it would help suicide rates among trans individuals, and the overall mental health of those attempting to live as they want to live.

“With this bill, I wouldn’t be able to appear as I want to appear to the public with a form that would greatly appeal to me,” said 15-year-old Cass Steiner, who appeared alongside her mother, Kat. “This would likely send me, and everyone else who is expecting treatment, into another deep depression.” 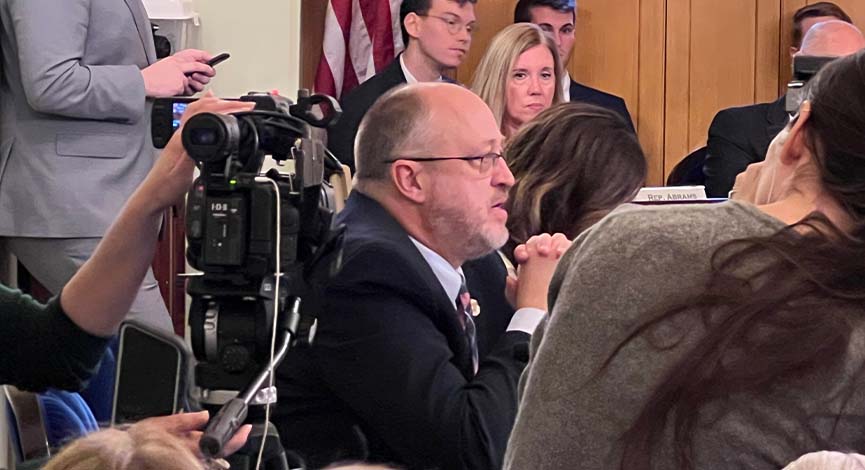 State Rep. Gary Click, R-Vickery, looks on as the House Families, Aging and Human Services Committee, of which he’s a member, listens to testimony against his bill restricting gender-affirming care, House Bill 454. The bill did not see a vote on Wednesday. Photo: Susan Tebben, OCJ

In the middle of two hours of testimony, Click introduced a substitute version of the bill, that he said was an attempt to “meet in the middle” of opposition and support.

In the new version, puberty blockers or hormone therapy is allowed for minors, but only after a doctor confirms that the child “has received on a routine basis and for at least a two-year period counseling related to gender dysphoria, mental health and the risks of gender transition,” according to the sub bill’s analysis by the Legislative Service Commission.

A doctor must also screen for other things that “may be influencing the minor’s gender dysphoria,” including depression, autism or ADHD, and “ensure that these comorbidities are treated and stabilized for at least two years.”

Along with conducting other physical, sexual, mental and emotional abuse screenings, a second doctor must be consulted and agree to the treatment plan.

Asked twice how the two-year time frame was decided on, Click told reporters it was “discussed by some other folks who came up with that and I thought that sounded reasonable.”

He did not specify who he consulted with to come to that amount of time.

The substitute bill also seeks to keep track of the number of medical and therapy appointments the minor attended before a physician recommended hormones or puberty blockers, any mental health conditions before being diagnosed with a “gender-related condition” and any follow-up the minor received after treatment.

That information would be reported on a yearly basis to the General Assembly and to the Ohio Department of Health.

Like the abortion ban that is currently held up in court, violating HB 454 could put doctor’s medical licenses at risk, and the state Attorney General would be authorized to bring against anyone violating the bill, should it become law.

The bill was not voted on during Wednesday’s committee meeting, with chair Susan Manchester, R-Waynesfield, adjourning the meeting immediately after the last witness of the day finished.

It’s not clear what the fate of the bill will be from here, with the General Assembly’s session ending at the end of December. More hearings could be scheduled, which Click supports because he said there are more people to hear from, particularly those who have been “damaged” by gender-affirming care.

He said the testimony he heard on Wednesday wasn’t anything he hadn’t heard before, but it didn’t change his mind on the bill.

He said he won’t “write anything off” in terms of new amendments to the bill, but he feels the bill has come as close to “the middle” as possible.

“There are proponents of this bill who are not happy with some of the concessions that we made, and of course the opponents aren’t happy with the fact that we didn’t make enough,” Click said.

For Schneider, she sees attempts to keep trans folks from getting the care they need as a negative response to success and progress the trans community has had over the last few decades. Progress that will continue, she says.

“The momentum will continue to be on our side and there’s this pain right now, but this is just sort of the last gasp of that resistance,” Schneider said.