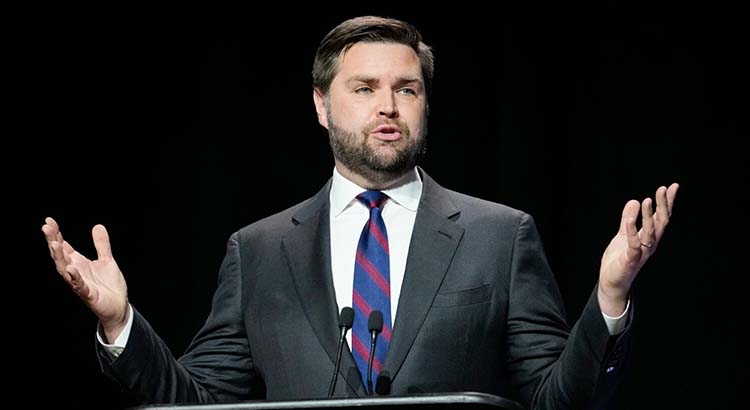 After two years of relentless lies from Donald Trump about the 2020 Election — lies that precipitated a deadly assault on the U.S. Capitol to try to overturn a free and fair American election — Ohio’s newly elected U.S. Sen. J.D. Vance says it’s not the traitor Trump’s fault that Republicans failed to create a national red wave in 2022.

No, it’s… small donors? Or something. Anything but Donald Trump’s fault.

Vance’s op-ed in The American Conservative, “Don’t Blame Trump,” gives Ohioans a taste of the shameless, self-debasing sycophancy Vance is willing to indulge as he prostrates himself before Trump in abject servitude.

He’s so desperate to forgive Trump any blame he doesn’t see the blatant contradiction of his argument to increase midterm voter turnout by restricting voter access.

This was Vance’s first major political statement after winning election to the U.S. Senate last Tuesday: licking the boots of a wannabe authoritarian who set about trying to destroy the machinery of America’s elections systems by installing groveling toadies in positions of electoral authority in swing states, and failing miserably.

Donald Trump got smacked by voters across the country in 2018, smacked in 2020, smacked in the 2020 Georgia run-off for control of the Senate, and smacked again in 2022. Announcing presidential candidacy for 2024, Trump promises to continue to suck all the oxygen out of the Republican room for another two years.

If you ignore all of your faculties of intelligence, good judgment, and common sense, Vance’s argument that it’s actually the small-donor game that swung the 2022 elections, and not the reality TV show star attempting to destroy American democracy for his own myopic self-interest, might make sense. But otherwise, it’s just more ass-kissing.

Vance found himself on the wrong end of the MAGA movement in 2016, likening Trump to “America’s Hitler.”

Now, after buckling to Trumpism and shedding himself of any pretense of actual convictions or personal dignity, the national tide is rolling back on Trumpism, and Vance is riding it out to sea.

The spectacle serves as fair warning: This is what happens when you pretend to be what you think others want you to be, instead of being true to yourself. In politics, it doesn’t get more hack than that.

Vance seems to believe that doubling-down on the constant chaos, dysfunction, division, resentment, pettiness, vengeance, grievance, corruption, fraud, waste, abuse, and hate-mongering of Trumpism is the way forward for national Republicans, as long as they increase their ground game and small donor support.

As a game plan, I can’t say it wouldn’t continue to work in Ohio, which is no longer a swing state and no longer politically relevant nationally.

But in the actual swing states and national elections, it’s a good way to make sure to keep being humiliated. When it comes to forces trying to destroy democracy in America, I can’t say I’m opposed to that.