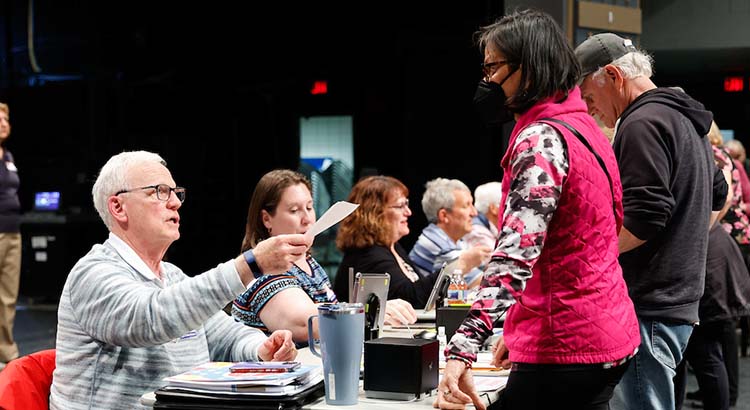 COLUMBUS, OH — MAY 03: Roster Judge Don English, a first time poll worker hands the ballot to a voter on the auditorium stage that serves as the voting location during the Ohio primary election, May 3, 2022, at the Worthington Kilbourne High School, Columbus, Ohio. (Photo by Graham Stokes for the Ohio Capital Journal)
ShareTweet

With elections coming tomorrow, reporters across the state are asking voters what issues matter to them. I saw a recent survey done by 10TV  that caught my eye.

This survey was a quick, small survey that likely had a convenience sample, but it still gives us some perspective on what voters are talking about. Asking respondents to rank twenty issues, four rose to the top. Looking at it and comparing it to the conversations I have with friends and the news coverage I see, I can see why voters have these on their mind as they prepare to go to the polls this week.

As far as places to live in the United States, Ohio is relatively affordable. According to Zillow data, the typical home price in the state is about $210,000—about $100,000 less than the country as a whole.

That being said, prices are still going up. Median sales prices are up 7.1% over the last year, meaning you’d have to pay about $15,000 more today for a house than you would a year ago. And these are changes that go beyond Ohio’s big cities—small cities like Lancaster, Harrison, and Zanesville are among the top 10 cities in Ohio with fastest growing sales prices, all experiencing price increases of over 30% in the past year.

Home buyers are getting a reprieve with prices starting to slow, but this is the same time the federal reserve is increasing interest rates, making it harder to buy a home. State- and local-level policymakers elected this week will have to decide whether they will promote affordable housing and construction of new housing or allow housing prices to continue to rise.

In the wake of the U.S. Supreme Court’s decision to overturn Roe v. Wade, states across the country are restricting abortion in new ways. Governor DeWine signed a ban on abortions after six weeks of pregnancy, which is currently on hold by court order.

The evidence is clear that bans on abortion are much less effective at keeping people safe and reducing the need for abortion than other strategies like increasing access to contraceptives. Policymakers elected this week will decide whether to promote these tools or continue to use abortion bans as a political cudgel.

According to the Health Policy Institute of Ohio, Ohio ranks 47th among the states and D.C. when it comes to health value. Adverse childhood experiences, disparities in health outcomes, and low public health infrastructure investment has led to these problems.

Policymakers elected this week will have opportunities to support programs that prevent health problems before they become expensive private and public liabilities.

These are only a few of the issues that Ohioans are focused on this election season. Let’s hope voters choose the right leaders who have the courage to take on issues like these rather than just talking about them before election day.