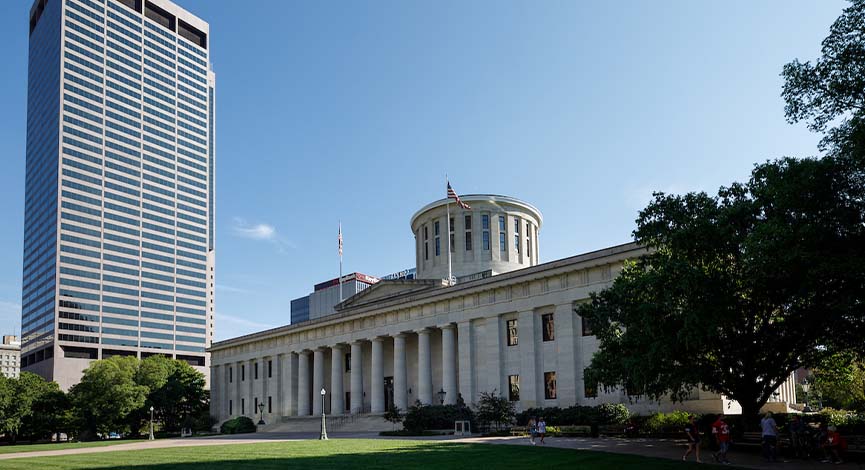 Wisconsin dodged the democracy bullet. Not Ohio. We’ll get to that. But before last week’s election, Wisconsin GOP gubernatorial candidate Tim Michels was caught on tape saying the quiet part out loud. “Republicans will never lose another election in Wisconsin after I’m elected,” he promised. Translation: His victory would seal one-party “voter-proof” control in the state.

Absolute power regardless of how people vote.

Fortunately for Wisconsinites, Michels was not elected. Democracy lives to fight another day in the Badger State. But what the Trump-endorsed candidate and election denier envisioned — a state GOP free to draw its own districts, pass “reform” elections laws to make voting harder, inject partisanship into election administration and maybe decertify results with the governor and state Supreme Court on board — has come to pass in Ohio.

Democracy was mortally wounded in the Buckeye State on Nov. 8. The outcome was fated in Republican-drawn congressional and legislative districts demographically designed to maintain one-party dominance. Gerrymander mastermind and state Senate President Matt Huffman is euphoric. His GOP-skewed legislative district maps, rejected as unconstitutional five times by the Ohio State Supreme Court, produced even bigger Republican super-majorities in both the Ohio Senate and Ohio House than before.

So there is zero incentive for the Republican-majority on Ohio Redistricting Commission to make a sixth go at drawing fair legislative maps that actually comply with the state constitution. Besides, it’s not like the judicial branch will hold their feet to fire after the midterms. Ohio Republicans, who glibly dismissed voter-mandated redistricting reforms as “aspirational,” now have a Republican-majority on the state supreme court that is in their corner.

To ensure that outcome state Republicans changed the ballot rules on judicial candidates in 2021. For the first time in a general election, three races for the Supreme Court on the 2022 ballot listed the party affiliations of the justices. The new partisan identifications worked like a charm in a red state riding its own red wave.

Three Republican justices — who approved every gerrymandered map ruled invalid by the court — won their highly prioritized and generously financed campaigns. The Republican monopoly of power in Ohio is complete. No wonder Huffman is gloating.

His party has all the political leverage and uncurbed license it needs to wield voter-proof control in the state. What a majority of Ohioans want has no bearing on the religious zealotry and far right fanaticism baked into the Republican agenda. First up in the lame duck session are bills to ban abortion at conception and allow genital inspections of suspected trans athletes.

I’d bet the farm that most Ohio voters are not card-carrying extremists who support forced birth or traumatizing female athletes in high school based on someone’s suspicion. But here we are. Without a voice. Democracy is in the death throes in our state. The opposition has been reduced to powerless dissent.

But the fight for a more just and equitable and inclusive Ohio goes on. If solutions and stability are to replace conspiracy and chaos we the people must not give up. Even as the red wave — a splash nationwide — washed over Ohio there were pockets of resistance to the radical deluge that give hope.

Voters in Ohio’s 9th Congressional District, redrawn by Republicans to rout a popular Democratic congresswomen, defeated a Trump militant and QAnon enthusiast who was at the U.S. Capitol on Jan. 6 and lied about his combat duty in Afghanistan. Northwest Ohioans voted for Marcy Kaptur by 13 percentage points in a district Trump carried by three in 2020.

In the closely watched 13th District, considered one of the most competitive congressional races in the nation, a local Democrat with deep roots in the Akron area and a record of leadership in the Ohio House won over a former Miss Ohio and Trump acolyte who falsely claimed, without evidence, that Trump won in 2020. Northeast Ohioans chose trust over Trumpy and Emilia Sykes, a former minority House leader, clinched the seat with 53% of the vote.

Southwest Ohioans ousted incumbent Republican Steve Cabot, who voted to overturn the 2020 presidential election results after a mob of Trump supporters stormed the Capitol. Voters elected a Cincinnati councilman and former public school teacher who campaigned “to end the chaos and extremism that so many of us are tired of.” Extremism lost in the few toss-up races on the ballot.

In the statewide race for U.S. Senate, the candidate who went all in on extreme for political expediency won but by a much lower percentage than Republican Gov. Mike DeWine. Split-ticket voting showed Ohioans far more comfortable with mainstream than MAGA. A Trump endorsement, coupled with a ton of last minute outside money, gave J.D. Vance his six-percentage point win in a race that should have been a GOP cakewalk.

But low voter turnout in the state, especially in Democratic strongholds like Cleveland, Columbus, and Cincinnati, also helped call the race for the California carpetbagger. That’s on Democrats who took those votes for granted. That’s on the no-show registered voters who took their democracy for granted. And lost it.

Ohio did not dodge what Wisconsin did in 2022. But there is a next time. The fight against our autocratic state government goes on. It has to. That’s on us.