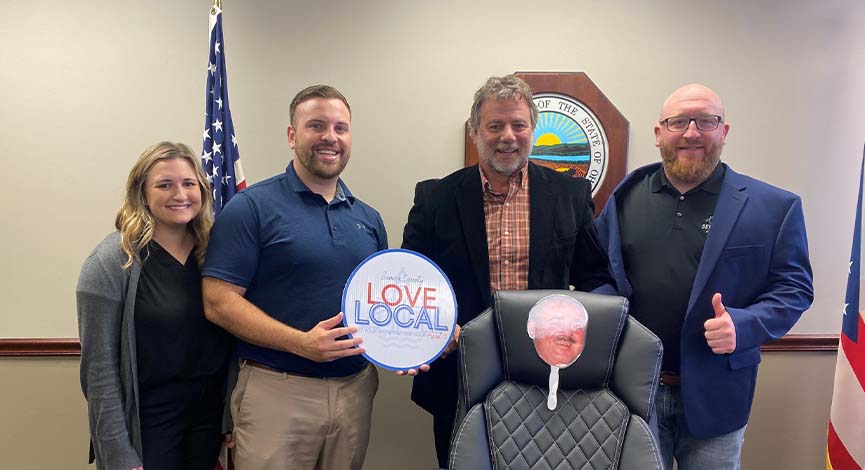 Tiffin, Ohio — The Seneca County Board of Commissioners welcomed representatives from the Seneca Regional Chamber of Commerce to their board session Thursday morning to recognize and show support for the organization’s Love Local campaign.

Chamber of Commerce Executive Director Bryce Riggs spoke to the board about the importance of the campaign.

“It’s important to keep your money where your heart is,” he said.

Chamber Stakeholder Relations and Marketing Manager Marisa Stephens also discussed the economic and social impact of supporting local businesses. She said the campaign helps community members understand why it’s so important to purchase products and services from neighbors across the community, not just during the campaign, but all year long.

The commissioners approved a proclamation supporting the initiative, which was inspired by Small Business Saturday, created by American Express.

Riggs said statistics show when community members buy local, of $100 spent, about $67 stay in the community. When people buy from a non-locally owned business, only about $43 stays in the local economy. Other data suggests that local retailers return 52 percent of their revenue back into the local economy, compared to just 14 percent for national chain retailers.

Stay tuned to the Chamber’s social media pages throughout this month and through the end of the year as chamber staff help to tell the stories of local businesses through the Love Local Campaign. In other business, the commissioners heard from two local business owners who had concerns with the Richland County Building Department. The department currently handles commercial permitting and inspection processes for Seneca County.

Over the past several years, the commissioners have discussed potentially making changes to what entity handles these processes.

In 2020, Commissioner Mike Kerschner referred to “mounting frustration” from contractors in the community, including “very major concerns” with permitting delays on larger projects.

Commissioner Tyler Shuff spoke in favor of moving forward with a new organization if they could speed up the permitting and inspection process and become less of an obstacle for local business owners looking to make improvements and investments.

Robert Kurtz, chief building official for SAFEbuilt, spoke to the commissioners Thursday and discussed how his organization could offer quicker and better service than what Richland County Building Department currently provides.

“I feel like they’ve got us handcuffed,” Spridgeon said of the Richland County Building Department’s delays on permitting processes, adding that plan reviews can take several months.

Kurtz said those same plan reviews are almost always finished and returned to contractors within about 10 days.

“We’re here to help you, not be a hindrance to you,” he said.

Kurtz said Sandusky County recently switched its commercial permitting and inspections over to SAFEbuilt and he said Huron County is going with the private, for-profit company beginning Jan. 1.

The commissioners do not currently pay any fees to Richland County Building Department for handling these processes. If the board decides to go with SAFEbuilt, they are likely to have to provide some office space in the county and will have to pay a one-time software cost of about $29,000.

More information is expected to be provided during next week’s board session and Commissioner Anthony Paradiso said Thursday he thinks the board is getting closer to deciding on a potential change. Later in the afternoon Thursday, the commissioners met with Seneca County Sheriff’s Office officials for a budget hearing.

Paradiso said Commissioners’ Office staff has been working on the General Fund budget over the past few weeks and that the request from the Seneca County Sheriff’s Office was “significantly” higher than last year’s proposal.

Between the Seneca County Jail and the Sheriff’s Office, last year’s initial budget was about $6.6 million. On Thursday Sheriff Fred Stevens discussed his office’s request for 2023 of about $7.6 million, a roughly 15.3 percent increase.