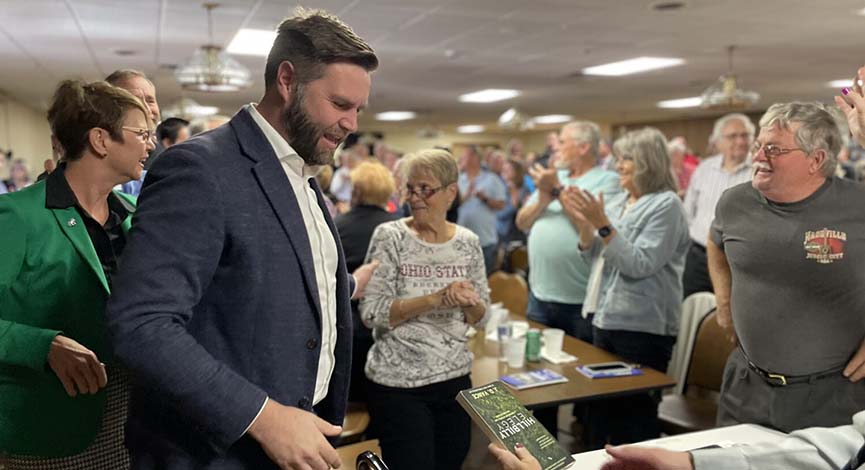 In the final weekend of the midterms, every campaign believes the race is coming their way. Whether honest assessment or false bravado, they’ll readily explain how this poll or those returns are good for their prospects.

From the outside looking in, it’s as though the biggest threat now is not a gaffe or a new ad or a freak snowstorm on the election day — it’s doubt. The campaigns maintain an absolute commitment to optimism as if they might manifest victory by the strength of their conviction. Or, at the very least, not jinx it.

The early vote offers campaigns a Rorschach test. Early in-person voting, where Democrats tend to thrive, is way up this cycle. Notably though, it’s up modestly in Democratic strongholds like Franklin County and way up in counties like Stark and Warren that heavily favored Donald Trump in 2020. Is that greater Democratic engagement or Republicans flooding the polls?

In Politico last week, veteran Democratic strategist Simon Rosenberg argued Democrats will have a good night on Tuesday, and although a red wave may still be coming, it’s not showing up in the early returns so far. The chief of the progressive think tank NDN largely bases that assessment on data from TargetEarly which models voters’ partisanship. He also claimed conservative organizations have “flooded the zone” with iffy polling in an apparent effort to shift the overall average.

Republican campaign staff seem skeptical of those TargetEarly figures. And on Friday they got a very favorable poll from a reputable source. Emerson College found among “very likely” voters, Gov. Mike DeWine has opened up a 21-point lead over Democrat Nan Whaley. They also found Republican J.D. Vance has begun to pull away from Democrat Tim Ryan in the race for U.S. Senate. Vance leads there 51% to 43%, the poll said.

That’s a lot of tea leaves, and at least one side is reading them wrong. We’ll find out more Tuesday night. 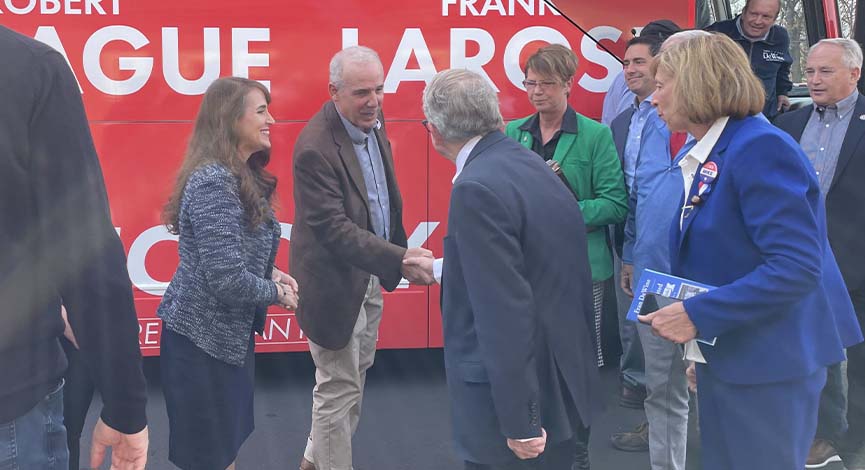 The local Statehouse delegation was on hand, too, including House Speaker Bob Cupp and Senate President Matt Huffman, both from Lima, as well as Sen. Theresa Gavarone, R-Bowling Green and Reps. Craig Riedel, R-Defiance, and Susan Manchester, R-Waynesfield. Gravel-voiced Keith Cheney, who heads up the county party, served as emcee.

In general, the speeches — and the jokes — were about the same as when the nominees visited Columbus. But they moved at a noticeably brisk clip. Speaking last, U.S. Senate nominee J.D. Vance gave a small peek behind the curtain.

“On the bus after this event, we’ve got Kewpee hamburgers coming, that’s the plan,” he said. “You guys don’t see the eyes of the people I’m riding the bus with right now. They’re looking at me like wild animals.”

While the speakers expressed confidence, they implored the crowd to vote and to encourage their friends and family to do so, too. Secretary of State Frank LaRose warned against letting confidence get to their heads. A veteran, he recalled being told the most dangerous stretch of a deployment is the final few days.

“And it’s intuitive why,” he said. “Your final few days people think, ‘I’ve got my bags packed, I’m heading home.’ You stop paying attention; you get complacent.”

“Well, the same thing applies in politics — complacency is dangerous,” he continued. “We’ve heard about a red wave. Awesome. I think that’s going to happen, but not if we don’t do the work.”

As they did at their previous stop in Columbus, many of the candidates harped on a perceived rise in crime and nodded to Issue 1.

The amendment will direct judges to set the cash amount of bail based on a defendant’s potential threat to public safety. It comes in direct response to the supreme court’s DuBose decision which reiterated excessive cash bail is unconstitutional. Reformers worry Issue 1’s passage would lead to a greater reliance on money for pre-trial release which puts poor defendants at a disadvantage compared to wealthier suspects.

Among the state supreme court nominees Justice Pat DeWine made the most explicit case for the amendment. He argued majority in DuBose is made up of “activist members of the Ohio Supreme Court,” and that their decision is somehow part of the agenda “on the coasts” to defund the police and end cash bail.

DuBose, which was decided in January of this year, has nothing at all to do with police funding, and did not end cash bail.

Speaking afterward, DeWine rejected out of hand any suggestion that advocating for an amendment overturning a decision in which he was part of the minority is itself judicial activism. 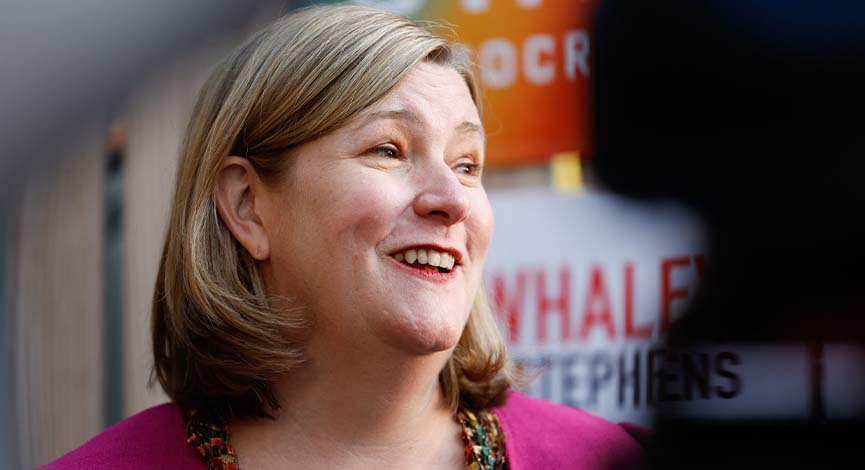 Friday evening, Democrats hosted an event of their own at German biergarten Gemüt in Columbus. U.S. Senate nominee Tim Ryan wasn’t on hand, but every other statewide Democratic nominee came out. Columbus Congresswoman Joyce Beatty and U.S. Sen. Sherrod Brown filled out the slate.

Speaking beforehand, Democratic gubernatorial nominee Nan Whaley made no distinction between early vote totals in red counties vs. blue counties. “When folks vote, I feel like we do really, really well,” she said. Whaley insisted, as she has since the June U.S. Supreme Court decision overturning Roe v. Wade, that abortion is major voting issue.

“I’m in rural areas, urban areas, the energy among particularly women in this state is very real,” Whaley said. “Particularly because of the loss of a right that happened on June 24. And how very extreme Mike DeWine is on it, and how they know that if he is reelected, more will come.” 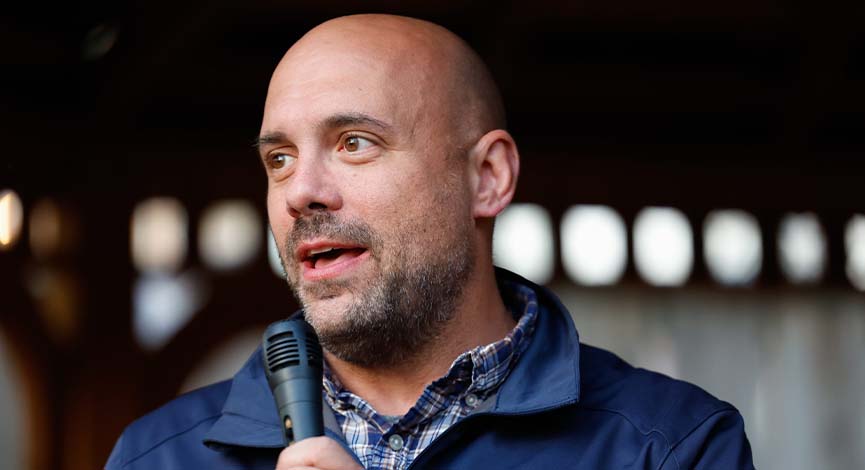 Polling has consistently shown economic concerns as the biggest issue among voters with abortion ranking second or third. Whaley argues back that polling dramatically missed a Kansas referendum on abortion.

The candidates warned the crowd about the stakes on Tuesday. “Do you really trust him with doing this vote fairly in 2024?” Secretary of State nominee Chelsea Clark said of Frank LaRose.

And just as the GOP did in Lima, they urged those assembled to lean on family to vote.

“We have Thanksgiving coming up folks, right? We know we’re going to have all those awkward conversations at dinner right?” Attorney General nominee Jeff Crossman said.

“Have ‘em now! Have them now, get them out of the way,” he shouted. “Tell them why you need to vote Democrat this year because the course of the state needs to change.”

The event itself went from happy hour to sunset, twilight, and then the dark of evening. But after Sherrod Brown finished, the crowd was rushing for selfies rather than the exits.

Souls to the Polls

On Saturday afternoon, Mount Hermon Missionary Baptist Church hosted a Souls to the Polls event in its gymnasium. Attendees ate fried chicken with green beans and macaroni and cheese from their seats.

State Rep. Dontavius Jarrells, D-Columbus, and state Sen. Herceal Craig, D-Columbus, got the crowd growing. But they were clearly the opening act for Congresswoman Beatty. U.S. Rep. Brenda Lawrence, D-MI, brought along as a guest, referred to it as “Beatty-town.” At least within that gym, she was probably right. 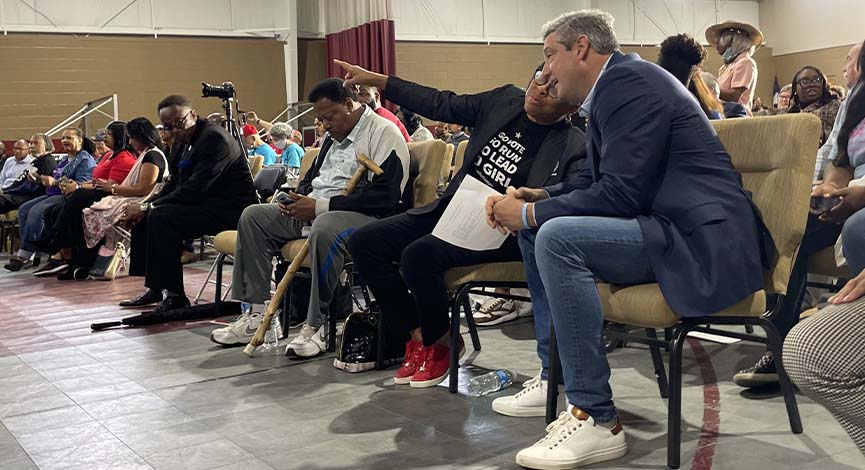 Beatty recounted getting arrested protesting for voting rights and demanding new funding for Black businesses during the pandemic. The crowd hung on every word. Introducing U.S. Senate hopeful Tim Ryan, Beatty described what one of her mentors, the late Cleveland congresswoman Stephanie Tubbs Jones, thought of him.

“She said probably one of the kindest, brightest, caring for all people,” Beatty recalled. “But for a white boy to care more about Black children, and Black people, I consider him my son.”

Ryan himself invoked biblical passages that say not to be fearful. “This moment is calling for absolute fearlessness on behalf of Americans,” he argued. Urging them to vote, Ryan said democracy isn’t like gravity — it’s a choice.

He closed with a familiar campaign trail story about Muhammad Ali. In it, a person describes seeing Ali knocked down in a fight, to which Ali replies I’ve never been knocked down — I’m either up, or I’m getting up. As the audience’s applause rose, Ryan yelled that Ohio, the working class and the United States are just the same, they’re either up or getting up.