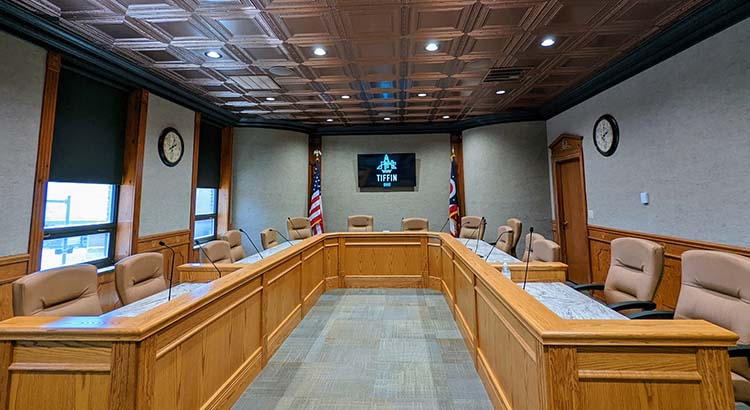 Councilmember Dan Perry said that according to his research, many similarly sized cities throughout Ohio have higher salaries for the positions of mayor, law director, and councilmembers when compared to Tiffin.

Council President Bridget Boyle said that not only are the salaries higher for these positions in similarly sized cities, but also the number of support staff assisting the mayor and law director.

During the meeting, Boyle asked Finance Director Kathy Kaufman what kind of flexibility the city’s budget has when considering pay increases.

Kaufman said there’s “some room” for pay increases but added that she would be able to provide a more thorough answer once she can analyze the exact proposals.

Councilmember John Spahr said that while he’s not yet in support of or against a pay increase for the positions, he would like to dig deeper into the salary data from other Ohio cities that were mentioned by Councilmember Perry to see what’s different about the economies in those cities when compared to Tiffin.

“How much money is that city pulling in, do they have a lot of industry that pays a lot of tax, are they wealthy areas that can afford that?” Spahr asked.

“We have to think about the fact that we are taking up a lot of somebody’s personal time, their education, their knowledge, their research. And I don’t want to say that it’s worthless,” Thacker said. “Especially whoever takes over the position next, we want to make sure there’s an incentive there for somebody who is qualified to take on that position.”

Boyle agreed with Thacker’s remarks, saying that she believes Law Director Brent Howard has “dedicated a lot of time that [she doesn’t] think he’s been compensated well for.”

Councilmembers tabled discussion on the matter and plan to discuss it further at their next meeting.