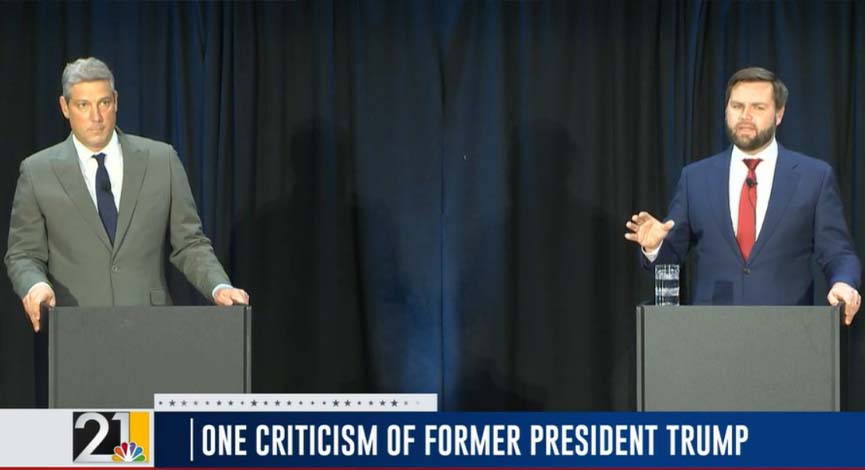 Polling has continued to show a dead heat within margins of error between Democratic candidate Tim Ryan and Republican candidate J.D. Vance, who are looking to replace outgoing Ohio U.S. Sen. Rob Portman.

Outside Youngstown’s Stambaugh Auditorium, a 1920’s marble-columned behemoth, two groups of supporters waved signs and chanted slogans for their favored candidate. Inside, it was less rowdy. Attendance was limited to members of the media.

The fireworks started early after a pair of questions delving into the nominees’ perceived subservience to their party’s leaders. Former Vindicator columnist Bertram de Souza brought up Donald Trump’s quip at a local rally that “J.D. is kissing my ass.” He pressed Vance to describe some point of disagreement with the former president.

Vance pointed to figures in the Trump administration like John Bolton who lobbied for “limitless non-stop wars,” but quickly shifted to dismiss Trump’s comment.

“Donald Trump told a joke,” Vance said. “He told a joke at a rally based on a false New York Times story.”

That article suggested Vance and other candidates may not be enthusiastic about Trump visiting their states. Vance then turned the charge on Ryan, arguing he’s beholden to House Speaker Nancy Pelosi and Senate majority leader Chuck Schumer.

“The guy who’s subservient to the national party is Tim Ryan,” Vance argued, “who has been begging for these guys to come into this race and save him from the campaign that he’s been running.”

De Souza asked Ryan to describe an issue where he disagreed with Speaker Pelosi, and Ryan brought up his bid challenging her as House Speaker.

“You have to have the courage to take on your own leaders,” he said. Turning to Vance he added, “these leaders in D.C., they’ll eat you up like a chew toy.”

“Mitch McConnell gave you $40 million dollars to prop up your campaign. Peter Thiel gave you $15 million. That’s $55 million, J.D. What do you think they want for that?” Ryan asked. “They want your loyalty, and you proved that you’ll kiss their ass, too.”

The night closed on an acrimonious note as well.  De Souza pressed Vance about his embrace of replacement theory, which contends that white citizens are being systematically replaced by non-white immigrants. The National Immigration Forum explains adherents believe there is a “plot designed to undermine or ‘replace’ the political power and culture of white people living in western countries.”

On stage, Vance offered a toned down version of the idea. He argued “Democratic leadership… say they want more and more immigration because if that happens they’ll ensure that Republicans are never able to win a national election.”

Vance added that his wife’s family immigrated to the country, but stressed that they came legally.

Ryan meanwhile cut right to the racism at the heart of replacement theory. He said the theory was the “primary motivator” of a mass shooting in May at a predominately Black grocery store in Buffalo.

“Some sicko got this information that he’s peddling,” Ryan said. “Again, those extremists that he runs around with, Marjorie Taylor Greene, Ted Cruz, all these guys that want to stoke this racial violence.”

“We’re tired of it, J.D.” he said. “This kid goes to a grocery store in Buffalo where Black people shop and shoots them up. No. We want to move on from that.”

Ryan had struck a nerve, both said. He called Ryan disgusting, disgraceful, and shameful at different points.

“I’ll tell you exactly what happens, Tim,” he said. “What happens is that my own children, my biracial children get attacked by scumbags online and in person because you are so desperate for political power that you’ll accuse me, the father of three beautiful biracial babies, of racism.”

Later this week Vance campaigns around the state with Sens. Tim Scott, R-South Carolina, Tom Cotton, R-Arkansas, and Ted Cruz, R-Texas. Tim Ryan will be crisscrossing the state in the coming week but without any surrogates alongside.

Asked after the debate if he was concerned about his lack of support from national Democrats when Vance has had numerous visit and an influx of campaign cash, Ryan brushed it off.

“We don’t need them, we’re going to win without them,” he said.