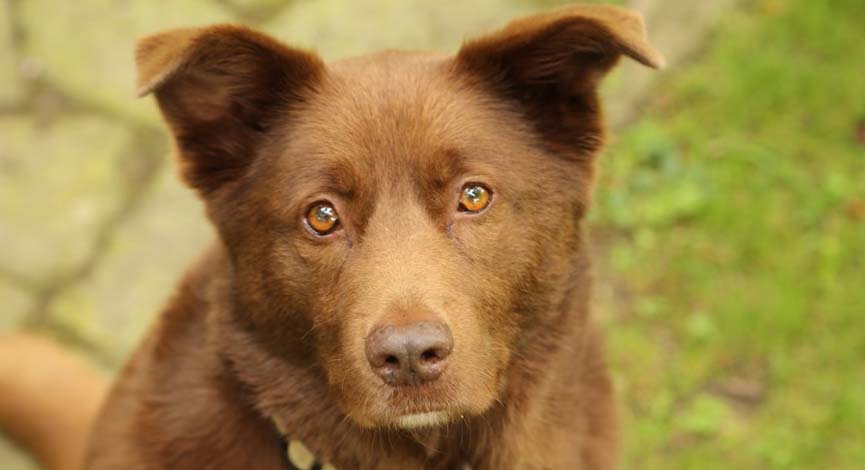 I knew it was coming. We all did. He was old. In failing health. Emaciated. His body was bony. Arthritic. Standing up was a struggle. So was walking. But he rallied. For us. Showed flashes of his younger self. Gave his family false hope that he had longer to live than he did.

In human years, Cleveland was up there. The furry brown Lab mix, who looked like a small bear, was closing in on 14 years. His muzzle was gray. His soulful, look-right-through-you eyes were tired. His hearing diminished. Breathing shallow.

We gathered close at the end. It was all we could do. We were told the sedative would allow him to relax for the first time in a long time. Then he was gone. Impossible to process. From an anxious pup with enormous paws to a senior dog plodding through his last days, he was always with us until he wasn’t. We chronicled his life (albeit a condensed cycle compared to humans) in pictures. Lots of them. His imprint on our lives was immeasurable.

Who knew a dog could impart so many lessons of the heart to humans? From a needy 6-week-old rescue puppy whimpering for attention to an aging animal teaching us about dying, Cleveland was the tie that binds. We would not be the same after he arrived in a borrowed crate. The kids were in grade school. My son had marked his calendar down to D-Day (Dog-Day). Dad promised a dog the first day of spring. It came.

The new addition to our clan, a first in the canine category, took some getting used to. Unlike my euphoric kiddos, mama was unsettled about a rambunctious dog running loose in the house. Baby Cleveland was a handful — an early Marley and Me sweetheart who demolished a sofa as a homecoming present. I was clueless about how to deal with a four-legged beast who had a penchant for chewing upholstery.

Neighbors ribbed me about who was walking whom whenever they saw young Cleveland dragging me down the street. (YouTube dog training videos only get you so far.) Eventually, the dog and I came to an understanding about who was in charge; he would teach, and I would learn. Every afternoon we walked to the elementary school. Cleveland waited for the students who belonged to him.

He patiently allowed himself to be pawed by throngs of grade schoolers who poured out of the building. Cleveland would grow up with many of them. He was a mainstay in their lives from playground to prom and more soccer games than any dog ought to endure. He was a trusted confident through Barbies and braces, adolescence into young adulthood.

His emotional support sustained us all. Through good times and bad, Cleveland was a dog to lean on and hug. No judgements or expectations. It was enough that we loved him back. Words were irrelevant. What mattered was not weathering a storm alone. With him, we didn’t.

It amazed me how often our dog seemed to gravitate toward people who needed his comfort or companionship. Almost like a sixth sense, Cleveland was drawn to those nursing the loss of a pet or sitting by themselves lost in thought. Strangers usually responded to his gentle intrusion with their own tenderness. They petted Cleveland, grateful for his company. They shared their stories. Smiled.

Something uniquely disarming about dogs makes humans feel safe to drop their guard and find common ground with each other. We may be polarized about our politics but not about our pooches. No trouble commiserating about their idiosyncrasies or swapping anecdotes about pet ownership.

Cleveland was a beloved dog about town. Everybody knew him from shopkeepers to the locals who would call out to him by name. At high school games he was a mascot with a custom-made jersey. His best friend on the square was the barber. He’d stop cutting hair when Cleveland popped in, give the dog a dose of loving, and send him off with a treat.

The kindness Cleveland elicited was contagious. All it took was a few wags of the tail.

I walked marathon treks with Cleveland in search of calm. He never complained. On some trails he’d race ahead then pause protectively to keep track of me. As the seasons passed and his energy waned, we’d rest more. Under the benevolent arms of ancient trees we let the world go by. It was enough to just be.

It may seem frivolous to reflect on the life and death of an old dog or linger on the lessons he conveyed to the humans who grieve him. After all, we are barreling toward an election with everything on the line. But it is precisely at this moment of corrosive ugliness and mounting anxiety that we must be the counterweight of compassion and humanity. We can see with our hearts and be different. Better. Cleveland showed the way through the warmth of unconditional love.

He was still teaching his family about better when he drew his last breath. His flittering eyes found mine before they closed. I understood. The pain of letting go was the price of loving deeply. But oh, my irreplaceable friend, the walk with you was worth every mile.