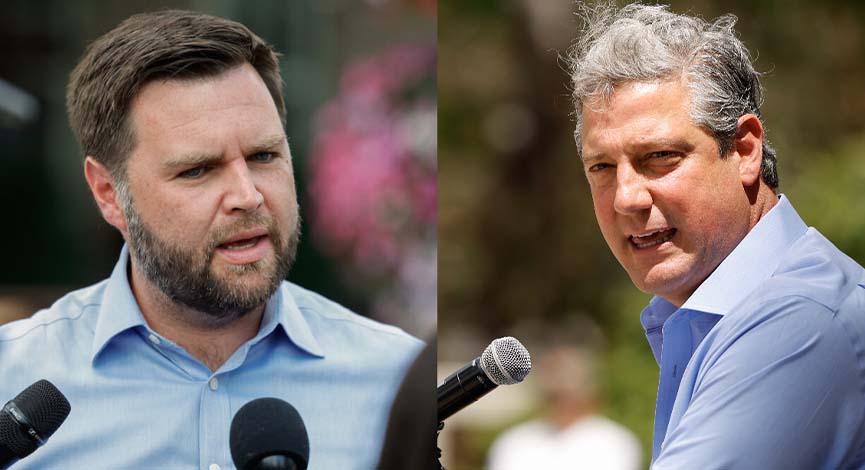 J.D. Vance and Rep. Tim Ryan brought their messaging from the campaign trail to their U.S. Senate debate this week. (Photos by Graham Stokes)
ShareTweet

In their first and only debate on Monday, U.S. Senate candidates J.D. Vance and Democratic Rep. Tim Ryan traded barbs that at times turned personal. But between the raucous GOP primary and Ryan’s decision to campaign through the summer, the candidates have articulated their positions on most of the big-ticket issues.

Republican Vance has emphasized perceived threats of existing border policy and criticized federal spending. Ryan paints Vance as out of touch and aligned with the most extreme wing of the Republican party. He contends that federal spending is helping to create jobs in Ohio after years offshoring. Both argue they’d be tough on China.

Still, moderators Colleen Marshall and Joe Toohey got the two on the record about a handful of new issues and crystalized a few others.

Most important, both candidates agreed without hesitation to accept the results of November’s election.

On the topic of the 2024 presidential race, Ryan has been a bit coy about whether he believes President Joe Biden should run again. He’s argued for “generational change” in leadership positions, but at the recent Intel groundbreaking wouldn’t explicitly say Biden shouldn’t run. Monday he was unequivocal.

“No, I’ve been very clear,” Ryan said. “I’d like to see a generational change. Mitch McConnell, Donald Trump, the president, everybody — like, we need a new generation.”

“I think the fact that we spend tens of billions of dollars putting people in prison for marijuana crimes is ridiculous,” he said. “We should legalize it. We should tax it. We should use it to fund our schools.”

Vance took a slightly different path, contending the matter should be left to the states, but added “I don’t want anybody going to prison for smoking a joint.”

He went on to offer a hypothetical case to caution against being “soft on crime.”

Marshall brought up a passage from Vance’s book “Hillbilly Elegy” in which he said all the jobs going to China was “one of the lies we tell ourselves.”

“Look, absolutely, China is stealing our jobs,” Vance said. “China has stolen a big chunk of our industrial and manufacturing base. What I said in my book is something I still believe today that that’s not the only thing that’s going on. But of course, it’s a huge, big part of the problem.”

On abortion, Vance has described himself as “100% pro-life,” but on Monday said, “I’ve always believed in reasonable exceptions.” He didn’t endorse the federal 15-week abortion ban offered by Sen. Lindsey Graham, R-SC, but allowed “some minimal national standard is fine with me.”

On the Marriage Equality Act, which would codify the right to same sex marriage, Vance reiterated his opposition, arguing provisions would allow couples to sue religious organizations. When Ryan explained he’d already voted in favor of it and would do so again, Vance chided him on avoiding the fine print.

“(I) identified very specifically a couple of problems with the legislation,” Vance argued. “Tim didn’t address that. He just pretended that it didn’t exist, because here’s the problem with Tim Ryan. He spent 20 years in Washington D.C. He actually doesn’t care about the details of public policy and I’m sure he didn’t even read the bill that he voted on.”

Ryan: down to earth

Ryan, meanwhile, kept his sights set squarely on what he terms “the exhausted majority.” Instead of nuance and minutiae he largely stuck with the popular and recognizable.

Ryan’s position on abortion? Codify Roe v. Wade. But he didn’t offer details about what that legislation should look like.

His plan for addressing inflation? Ryan says he wants a “middle class tax cut.” But he didn’t wade into whether that tax relief would simply fuel more spending and thus more inflation.

His most consistent line of attack, though, was that Vance is out of touch and hypocritical. He criticized Vance for investing in companies that make their products in China and hire foreign workers.

“I’m telling you J.D., you’ve not denied investing into China. And you’re talking about illegal immigrants — he has businesses in Ohio that actually hire foreign workers,” Ryan argued. “You think we’re stupid J.D. and we’re not. I’m just telling you that you’re from Silicon Valley. You don’t understand what’s going on here in Ohio.”

Vance does hold investments in companies like the outdoor brand Cotopaxi which produces some of its gear in China, and Edisun Microgrids which imports some equipment from China. But those investments make up a relatively small portion of his portfolio — only worth up to $15,000 each. When it comes to foreign workers, Axios has reported more than three dozen companies backed by venture funds associated with Vance have applied for HB-1 visas.