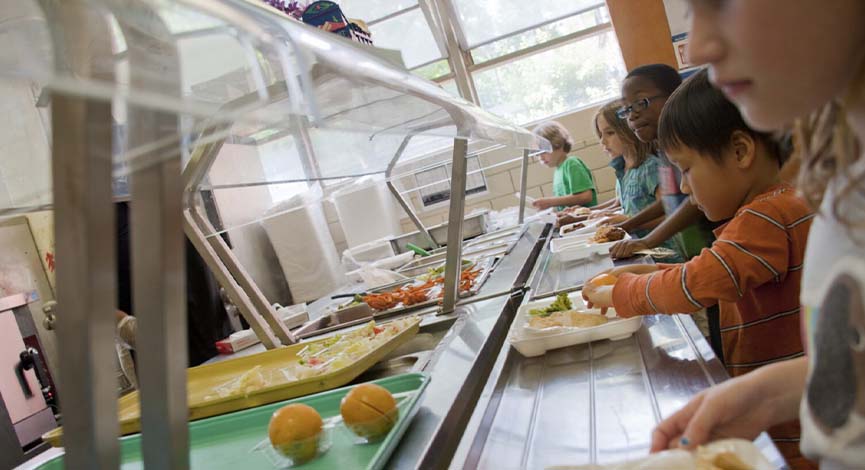 Students getting their lunch at school. Photo by Amanda Mills/Centers for Disease Control and Prevention.
ShareTweet

Last month, the Ohio State Board of Education officially recommended that the state of Ohio use American Rescue Plan Act dollars to provide free breakfast and lunch to Ohio students through the end of the year.

The federal government has been providing free lunch to children from low-income families since 1946, when President Harry Truman signed the National School Lunch Act into law. The program was expanded in 1966 through the Child Nutrition Act, which added breakfast and summer meals to the program.

Free lunch has a big impact on the children who receive them. Half of the food consumption for these children comes from free or reduced-priced meals. Recent expansions in availability of free lunch has also meant better outcomes for children. Recent studies of expansions of free school lunch programs suggest the expansions have led to increases in math scores for students, especially among elementary school students and Hispanic students. These expansions have also led to decreases in suspensions among white elementary-school age boys.

School lunch programs have been expanding for years. In 2011, schools in Illinois, Kentucky, and Michigan began piloting a program that would make all children in low-income districts eligible for free lunch. By 2019, two-thirds of all low-income schools across the country were providing free lunch meals to their children.

The pandemic brought a seismic sea change to this landscape. The United States Department of Agriculture, which administers the free school lunch and breakfast programs, suspended all eligibility requirements for free and reduced meals, making free lunch universal with a single administrative change.

Last summer, this expansion lapsed, and Ohio reverted to a limited system of provision of free and reduced priced lunches.

It seems that the biggest reason free school lunch and breakfast has not been expanded even more aggressively in the United States is because of simple budget constraints. In the particular policy the state Board of Education calls for, American Rescue Plan dollars have a number of different alternate uses. I have not done an analysis of all possible uses for these funds, but I have to imagine this would be a use that would yield relatively high economic and equity benefits.

The pandemic changed a lot of assumptions about the U.S. safety net. Maybe a permanent change could come to the program: maybe all children in Ohio should get free meals at school.