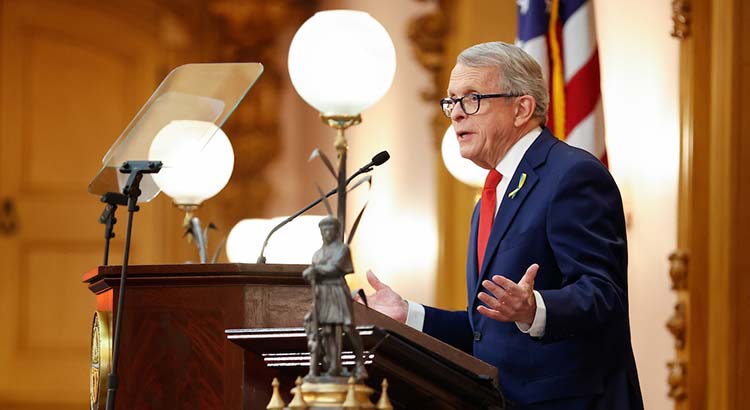 Gov. Mike DeWine during the State of the State address, March 23, 2022, in the House Chamber at the Ohio Statehouse in Columbus, Ohio. (Photo by Graham Stokes for the Ohio Capital Journal)
ShareTweet

Then those state politicians turn right around and allocate billions in new funding, installing new federally funded programs and initiatives in their states.

Then they take a victory lap, patting themselves on the back, and giving minimal acknowledgement to where the money originated.

They seem to desire people think it was D. B. Cooper’s loot simply fallen from the sky, and they are doling it out to the public through the magnificent generosity of their own pure hearts.

This happened prominently 10 years ago with President Barack Obama’s Affordable Care Act, but what’s happened in the past year and a half with the American Rescue Plan Act passed by Democrats in Congress and signed by President Joe Biden is truly next level.

No Republican House or Senate member supported the bill. Ohio Gov. Mike DeWine said that had he still been a U.S. Senator, he would not have voted for it.

But DeWine is contorting himself into shapes most often seen in mall pretzel stands as he tries to explain away the gobsmacking hypocrisy of spending billions in ARPA money while running ads against his opponent slamming the ARPA as “reckless spending.”

If the ARPA is reckless spending, Mike DeWine is one person doing a helluva lot of that spending.

Ohio’s state share is $5.4 billion. Ohio had spent about $3.47 billion of that as of mid-September.

DeWine signed off on $2.2 billion in spending from the ARPA allocated by the supermajority Republican Ohio General Assembly.

Every day is Gov. DeWine complaining about Democrats’ spending and then sending me 5 press releases championing his use of ARPA funds https://t.co/7DuyggY1RL

But don’t believe the evidence of your eyes and ears — or the final paragraph of DeWine’s self-congratulatory press releases, which note all this “reckless spending” money DeWine is throwing around came from the ARPA: This is not hypocrisy. Sure.

“Should he not spend the money that’s already been given to the state?” a DeWine spokesperson asked when pressed by Cleveland.com. “Should he reject that money?”

That is indeed one option.

Former Gov. John Kasich did try to reject Medicaid expansion under Obamacare before being circumvented.

Despite Kasich’s efforts, nearly a million more Ohioans have health care now because of Obamacare.

I may be old fashioned, but a million more of my Ohio sisters and brothers having access to affordable health care seems pretty good to me. Kasich held to his ideological guns and tried to deny them it. Likewise putting ideology over people is indeed one of DeWine’s options.

Here’s the thing though. Rejecting the ARPA money, or accepting it and hypocritically using it to extol his civic virtue while scorching it as reckless, are not DeWine’s only options.

This may be hard for some politicians to wrap their heads around, but honesty is also always an option.

You don’t have to insult everybody’s intelligence.

People are capable of thinking through complex and nuanced situations, as long as their leaders are not lying to them, manipulating them, and confusing them.

If DeWine thinks that these projects that he is funding with this federal money are worthwhile; if he thinks they are important, helping, or perhaps even critical, then he should be grateful that money was allocated to him to give out. He doesn’t even have to praise Biden or ARPA. He could just have a Coke and a smile and keep his mouth shut.

But DeWine wants it both ways, and is willing to sacrifice his honesty to obtain that. He wants to fear-monger over the ARPA while spending billions in ARPA money.

The big hairy truth about the American Rescue Plan is that it is one factor of many, global factors that have caused inflation to spike, but it is also, simultaneously, playing a very significant role in boosting America’s economy, including through the spending DeWine is doing.

But this and various other contradictions are making economists’ heads spin, along with the markets, creating enormous uncertainty right now.

Washington Post finance desk reporter David J. Lynch put it succinctly on Oct. 9: “The political and economic consequences of Biden’s first landmark law will be debated for years. But 18 months later, there is a consensus that the rescue plan was a double-edged sword: Bathing the economy in cash spurred the fastest recovery of any Group of 7 nation, even as the indiscriminate nature of that spending helped ignite the biggest jump in consumer prices in 40 years.”

Lynch’s article, “Biden’s rescue plan made inflation worse but the economy better,” is worth reading in full.

As complex as the truth about the American Rescue Plan, inflation, and the economy is, there is another put-out-of-mind fact decades in the making.

The unspoken truth about federal spending is that federal grant funding, the number of federal grants, and the issuance of federal mandates have steadily increased under both Democratic and Republican Congresses and presidents since the early 1980s, the Congressional Research Service has made clear in extensive analysis.

The rest is rhetoric, platitudes, and politics.

And when people try to game you instead of being honest with you, they are insulting you.