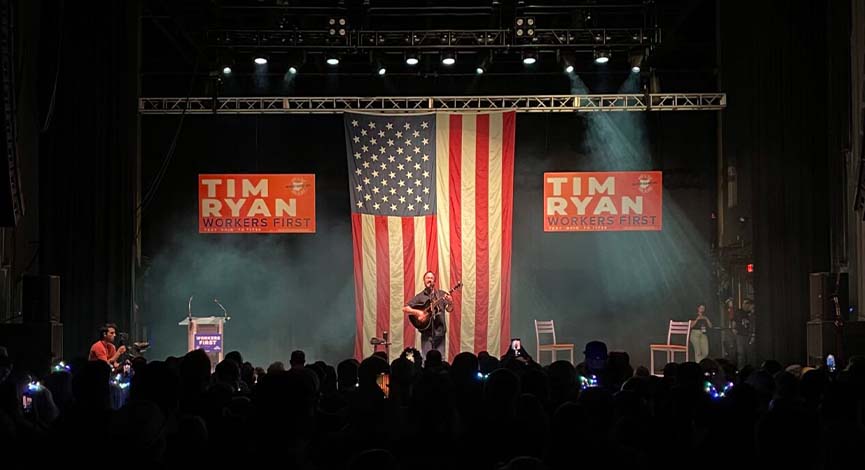 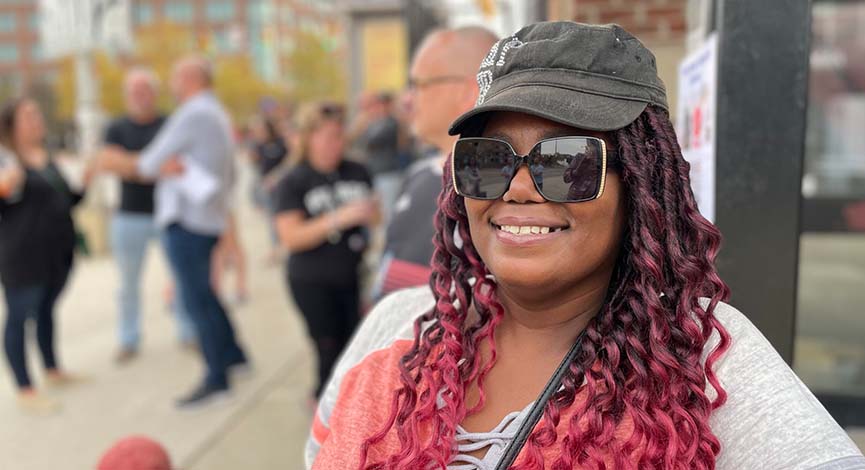 Rashaun Fain came from Wooster to see the concert. (photo by Nick Evans)

People began lining up before noon in Columbus to see Dave Matthews. Near the front, Rashaun Fain said she’d driven down from Wooster for the free show supporting Ryan. Fain described herself as a Democrat and offered a blunt reply to what turns her off about Vance.

“Everything,” she said, once she stopped laughing. “Listen, I know who I’m not voting for, too. You know what I’m saying?”

Jessica Dible drove down from Cleveland for the show. Wearing a black shirt that read “Pro Roe 1973,” she explained women’s reproductive rights is her the top political issue. She criticized anti-trans legislation as “horrific” too.

Despite Monday’s show being her 75th time seeing Dave Matthews, Dible said she came to support Ryan and the show was “just icing on top.” 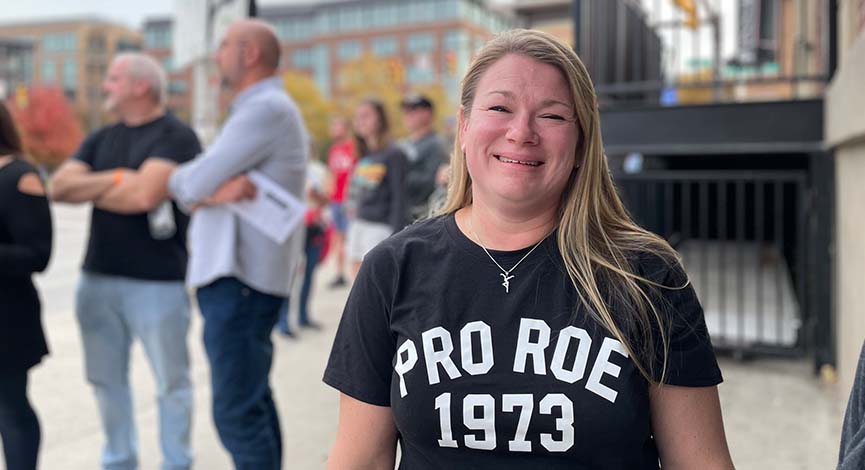 Jessica Dible came from Cleveland to see the show. (photo by Nick Evans)

From the stage, Ryan tried to link the optimism he hears in Matthews’ music with his campaign.

Before playing a handful of songs, Matthews sat down for brief, rambling conversation with Ryan. Matthews described first seeing Ryan on C-SPAN giving speeches on the House floor.

“So often it was so much passion, and he was appealing to everybody in the room to just come — can we just talk, can we just have conversations, can we figure out solutions? Rather than just saying no, or just saying no, because who wants to live in a world where you just say no all the time?”

While Ryan is offering olive branches to those in the middle and on the right, Vance is working to energize the Republican base and urging voters to reject Ryan’s ‘moderate’ self-portrayal.

In Delaware Tuesday, Vance argued the Biden administration has fueled the opioid crisis through a less aggressive posture toward China, lax border enforcement and “soft on crime policies that make it possible for violent criminals to get back on the streets.” The connection between drugs and border policy is dubious, and since most drug crimes are prosecuted at the local level, any president would have limited control over incarceration. 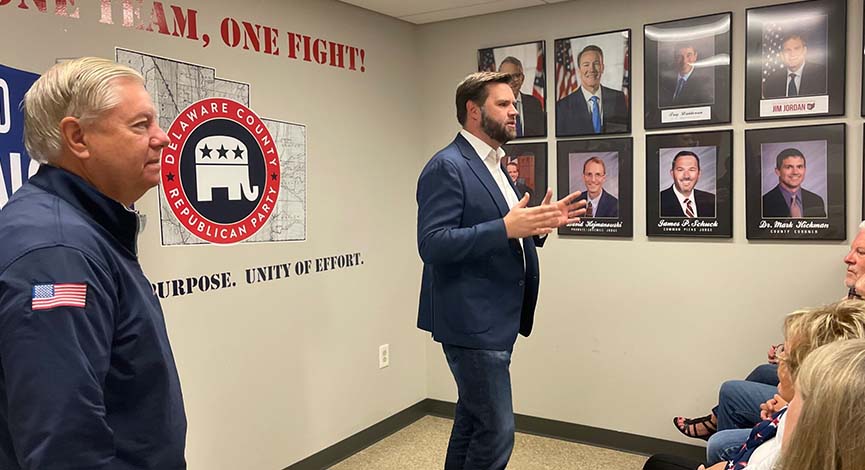 Despite Vance’s dismay over the opioid crisis, it didn’t stop him from cracking a joke he picked up from U.S. Sen Ted Cruz, R-Texas, that “inflation is so bad Hunter Biden can no longer afford crack cocaine.”

“Let’s all shed a tear for Hunter Biden,” Vance added.

The campaign’s focus over the next two weeks, Vance told attendees, is maximizing GOP turnout. He urged the crowd in Delaware to get 10 people out to the polls.

“And let them know two things,” Vance said, “why you’re voting for J.D. Vance, and why you don’t believe Tim Ryan and his ridiculous campaign.”

U.S. Sen. Lindsey Graham, R-South Carolina, emphasized turnout as well: “I want you to be able to see red in Delaware County from the space station,” he said.

Pushing back on the idea of split ticket voters favoring Ryan, Graham questioned the wisdom of voting for a Republican governor and a Democratic senator.

“Now you’re in a boat and you’re trying to get across the lake,” Graham described. “You got a governor rowing one way. Why would you give Tim Ryan an oar to row the other way? I mean, do you think he would row the boat with (Gov. Mike) DeWine?”

“He would,” Graham said, pointing at Vance. “These guys would be rowing Ohio together.” 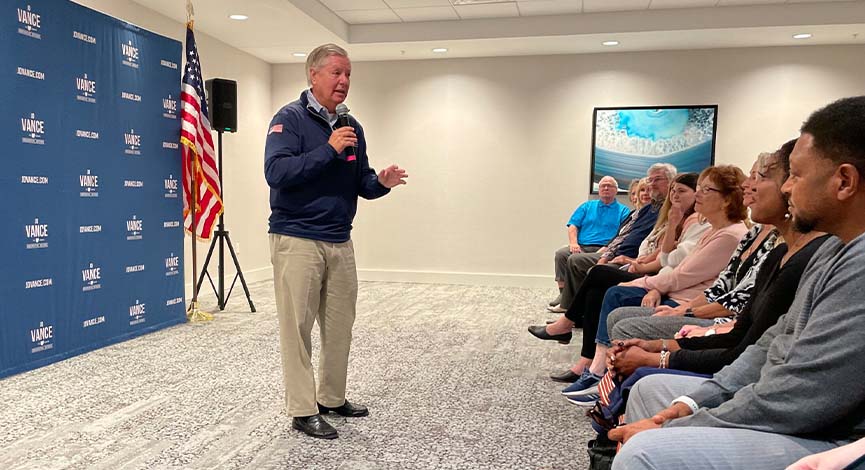 Graham argued keeping Ohio’s second Senate seat in the Republican column is crucial to the party’s hopes in the coming years. In Columbus, he joked that he’d like to be budget chair, but he also made the case that GOP control in Congress would allow the party to dictate the agenda during the next presidential election.

Graham added that Vance could “write a new chapter” for the party. “Here’s what I think J.D. can do,” Graham said, “I think J.D. can connect with people that in the past have believed that we’re not for them.”

And it appears there’s some appetite for that. In Columbus, Phil and Debbie Balasko said they appreciated Vance’s ability to maintain a Trump-style agenda with a bit less of the Trump-style rhetoric.

“I’m a supporter of the plan, not the man as far as Donald Trump goes,” Phil explained. “I’m hoping that J.D. Vance can be a fresh voice to support us and continue that MAGA agenda for the working people.”

Ryan’s play for independents and moderate Republicans alongside Vance’s emphasis on conservatives continues a pattern that has played out since before the primaries. Polling has consistently shown, and Graham’s pitch only underscores, a noticeable share of voters are willing to cast a ballot for Republican Gov. Mike DeWine and Democratic U.S. Senate nominee Tim Ryan.

But the news isn’t all good for Ryan. Although Marist’s latest survey shows him picking up a greater split ticket share than Vance, the nominees are splitting independents right down the middle.

Both teams will be back in central Ohio next week, though, for a townhall hosted by Fox News. In an emailed statement Ryan struck an enthusiastic tone, saying it would “give even more Ohioans an opportunity to hear about how I’m going to fight like hell for them while JD Vance is just a total phony.”

Speaking to reporters in Columbus, Vance sounded eager as well, and criticized Ryan over the format.

“Obviously, it’s a good opportunity to talk to voters,” Vance said, “but I’m actually a little annoyed that Tim Ryan wouldn’t agree to it as a debate because I think it’s important for people to see us exchange ideas, not just talk at them.”

In response the Ryan campaign pointed to their initial position on debates. If Vance agreed to the three laid out by the Ryan campaign, including one hosted by the Ohio Debate Commission, they would agree to debate “any other time and place.”