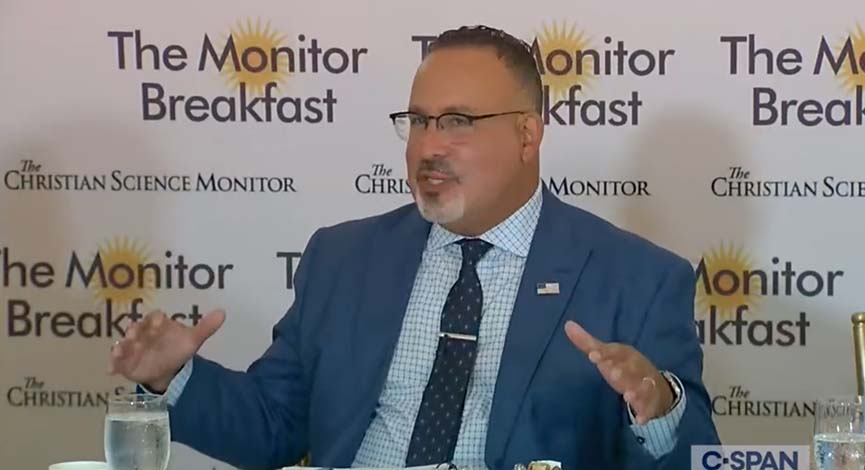 Screenshot from C-SPAN of Education Secretary Miguel Cardona at a reporter breakfast in Washington, D.C., on Sept. 7, 2022.
ShareTweet

Amid K-12 teacher shortages, book bans and attacks over critical race theory, U.S. Education Secretary Miguel Cardona at a meeting with reporters on Wednesday stressed the need for higher salaries to attract prospective educators to the profession.

Cardona also touted the Biden administration’s recent student debt relief announcement in late August. The White House said President Joe Biden will cancel up to $20,000 in federal student loan debt for Pell Grant borrowers and up to $10,000 for all other borrowers with an income of less than $125,000 for an individual and $250,000 for a household.

But Cardona acknowledged that the one-time student loan cancellation policy did not address the root cause of the student loan crisis, and “that will not fix the long-term issues.”

Cardona spoke to reporters at a breakfast sponsored by the Christian Science Monitor and as the Biden administration gears up to promote its successes in advance of the midterm elections.

Cardona said that on the K-12 level, teacher salaries are a key problem.

“Look, we want to recruit students,” he said. “We have to make sure that they’re not thinking, ‘Well, if I become a teacher, I have to drive Uber on the weekends, or I have to waitress on the weekends to make ends meet.’ That’s unacceptable.”

He pointed to Montana, where a National Education Association teachers union study released in April found the average starting teacher salary is $32,495, the lowest in the nation. Cardona added that many teachers pay for school supplies out of their own pockets.

While not every school district is experiencing a teacher shortage, and some shortages depend on the subject taught, there are currently 567,000 fewer educators in America’s public schools today than there were before the pandemic, according to an analysis by the NEA. And nearly all U.S. states suffered a decline in public education jobs, according to research from Pew Charitable Trusts.

Conservative activists and predominantly white parents also have pushed the falsehood that schools are teaching critical race theory, an academic framework that says systemic racism is embedded in the legal system. Critical race theory is not taught in K-12 schools.

In many school districts there has also been a drive to ban hundreds of books. A majority of those bans have been targeted at books written by authors who are people of color, LGBTQ+, Black and Indigenous, and feature characters from marginalized groups.

Recently, an Oklahoma teacher resigned from her job following a complaint from a parent after she told her students that they could receive an online library card from New York City’s Brooklyn Public Library’s Books Unbanned project to access books the school district banned.

Oklahoma Secretary of Education Ryan Walters called on the state board of education to revoke her teaching certificate, according to reporting by NPR.

In regard to student debt, Cardona said the policy initiatives that the Department of Education is backing to help ease the burden include increasing Pell Grants, reforming income based student loan repayment, revamping the Public Service Loan Forgiveness program and providing more transparency to students and parents on the return of investments provided by attending a specific college or university.

The Public Service Loan Forgiveness program “forgives the remaining balance on your Direct Loans after you have made 120 qualifying monthly payments under a qualifying repayment plan while working full-time for a qualifying employer,” according to the Department of Education’s website.

“You know, the days of going to college and leaving $150,000 in debt and then getting a job, paying $35,000 a year doesn’t cut it,” Cardona said. “We have to give parents more information, transparency, too, so they know which institutions they should consider for their children.”

The cost of tuition for higher education is largely set by local institutional boards such as a state board of education, or the state legislature. College tuition inflation has averaged 4.63% each year from 2010 to 2020, according to data from the Education Data Initiative, which collects data and statistics about the U.S. education system.

“It is my intention to bring college presidents to the table, to bring the associations that govern them or that represent them to the table,” Cardona said.

Cardona said one tool the Department of Education has to address high tuition costs is the agency’s College Scorecard, which provides prospective students and parents with data on college costs, graduation rates, and post-college earnings.

He said the federal government can also “provide support and funding for those institutions that we believe are providing an inclusive environment, but also providing a good return on investment.”

“And then it may be that with those universities and colleges, we come up with different practices, that we’ll work with our partners on the Hill to try to ensure that, you know, throughout the country, our universities are accessible to all students,” he said.

Back to school tour

Cardona is set to kick off a tour in which he and first lady Jill Biden, who will be along for the first two stops, will visit schools to show how communities are helping students recover and thrive after the coronavirus pandemic led to massive school closures.

The first stop is in Knoxville, Tennessee, where Cardona and the first lady will see how the state has worked to recruit and retain educators.

The analysis by the NEA, which is influential in Democratic politics and lobbies at the state and national level on education policy, found that 55% of “educators now indicating that they are ready to leave the profession they love earlier than planned,” due to burnout from the coronavirus pandemic.

The Bureau of Labor Statistics in a 2018 study projected that over a decade, from 2016-2026, an average of 100,000 elementary school teachers would leave the profession each year.

Cardona also will travel to Pennsylvania, where he and second gentleman Douglas Emhoff will highlight how schools are continuing to help students recover through learning loss and receive mental health support, as well as talk about how teachers and administrations could receive debt relief through the Public Service Loan Forgiveness program.