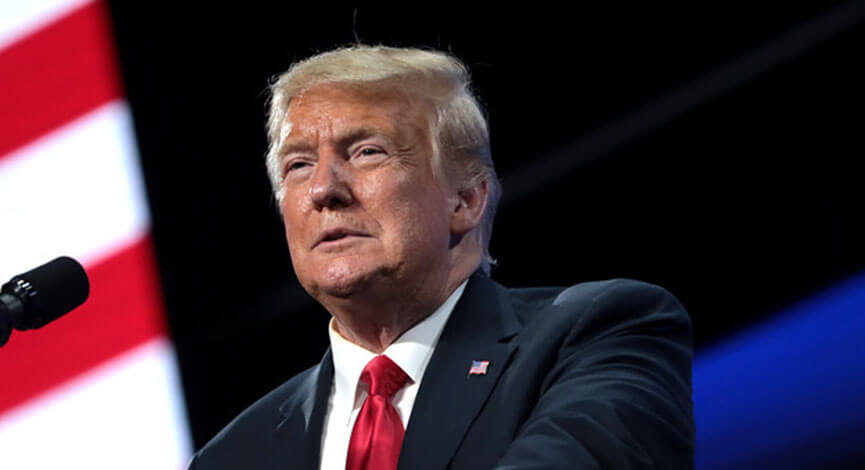 Former President Donald Trump walked onto the stage in Youngstown to “I’m Proud to be an American.” During the last half of the song he simply stood there, squinting into the spotlights, closed smile plastered on his face, basking in the crowd’s applause.

The back quarter of the 7,000-seat Covelli Centre was less than half full.

About an hour into the speech, as Trump began plugging his slate of endorsed candidates, a slow, steady stream of attendees started heading for the exits.

One innovation, however, stood out. In the final few minutes, organizers began playing music beneath his speech. As the music crescendoed, out in the crowd, his supporters raised their hand, holding up one finger as he concluded.

As is customary, Trump teased a possible 2024 bid, extolled his poll numbers and past accomplishments, and hurled venom at his White House successor. Eventually, he talked a bit about why he visited.

“A vote for Tim Ryan is a vote to extinguish America’s future,” Trump said of the Democratic Congressman running against J.D. Vance, his pick for Ohio’s open U.S. Senate seat.

Just as he did earlier this year, the former president is hoping his presence and imprimatur can push Vance across the finish line. Trump’s backing was crucial for Vance in the primary, but the race has garnered increasing attention because of Vance’s struggles since. He’s had trouble raising as much money as his opponent, and polling indicates a race much closer than Republicans would like.

U.S. Reps. Jim Jordan and Bill Johnson, both safe Republican incumbents, made no secret about how important it is to elect Vance.

Vance for his part was more pointed in his attacks of Ryan, calling him out directly as an “enemy” of police, as if Ryan were in the room. Clearly frustrated with the success Ryan has found tacking toward the middle, Vance argued “there are two Tims out there. There’s a D.C. Tim who votes 100% of the time with Joe Biden and then there’s campaign Tim who pretends he’s a moderate.”

“Ladies and gentlemen, we need to kick D.C. Tim to the curb, make him go back home and get a real job,” Vance said.

Interestingly, before Trump wound through the laundry list of candidates on hand, including Secretary of State Frank LaRose, Auditor Keith Faber, and all three of the Republican state supreme court justices, he carved out time for Issue One. That measure would direct judges to consider public safety when setting the monetary terms of bail. They can already consider safety for non-monetary conditions. Republicans pushed the proposal as a way to put “law and order” on the ballot.

The juice and the squeeze

For all that energy, there’s no straight line from Trump’s visit to the ballot box. Visiting Youngstown, which is in Ryan’s congressional district, does offer opportunities to beat up on an opponent. But it’s not an obvious setting for boosting Republican turnout in a statewide election or providing a leg up to first-time candidates.

Ohio’s 7th District and 13th District are just next door, and both feature Trump-backed candidates Max Miller and Madison Gesiotto Gilbert. Both are more centrally located and cover areas with greater population density. Further west, Ohio’s 9th District is one of the most competitive in the state, pitting Trump endorsed newcomer J.R. Majewski against Democrat Marcy Kaptur, the longest-serving woman in the House’s history.

While gathering interviews among attendees, few of those seemed to be Ohio voters. I spoke with people from California, Illinois, North Carolina and Pennsylvania — all of them fired up to hear Trump, but politely uninterested in the remainder of the speakers.

Trump himself even commented on it. Right after insisting a vote for Tim Ryan would extinguish the American dream, he asked how many people were there from Pennsylvania, where he has endorsed Dr. Mehmet Oz. The cheer from the crowd was significant.

Ron Rains from Charlotte, North Carolina was all set to weigh in before stopping himself.

“Oh, that’s a different state! I forget what state I’m in — I’m in the state of confusion, right now,” he chuckled.

In a bit of serendipity, he and three family members happened to be visiting the Cleveland Clinic when they heard about the rally. They picked up matching blue tie-dyed Trump shirts the night before.

Nancy Vrudney came out from Massillon. She explained seeing Trump in person was on her bucket list, and she was excited to hear from Jim Jordan as well. Where Vance is concerned, Trump’s endorsement was important for her in the primary.

“The only reason I’m voting for him is because Trump said to vote for him,” she explained. “I feel that Trump knows these people better than we do.”

But she’s far from sold on Vance, warning “once he gets in, we’ll see what he does. And then if he doesn’t pull his weight and do what he says, then I’ll never vote for him again.”

“Who would hold their biggest event of the general election at the same time as the OSU game,” Ohio Democratic Party Chair Liz Walters asked in reference to Vance during a press conference ahead of the rally.

“An out-of-state fraud who is out of touch with Ohio,” she answered. “That’s who.”