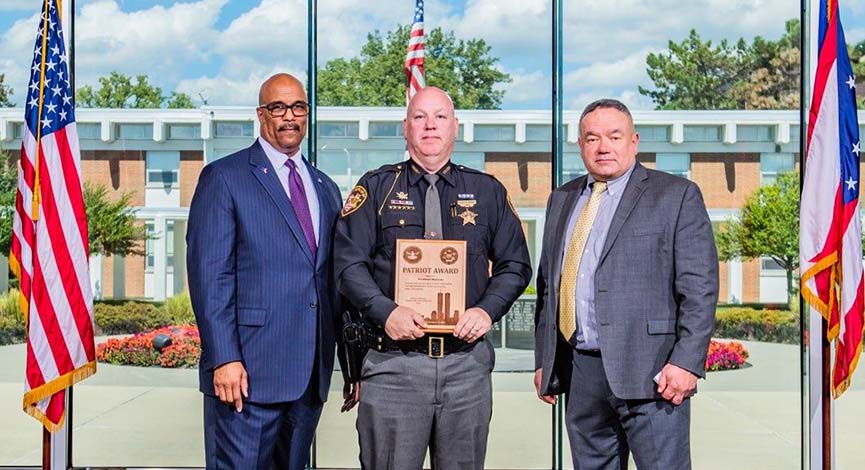 Tiffin, Ohio — Seneca County Sheriff Fred Stevens was among 31 individuals to receive a Transportation Security Administration Patriot Award earlier this month for his work in keeping the community, the state and the nation safe since 9/11.

On Friday, Sept. 9th at the Ohio State Highway Patrol’s Training Academy, the second annual TSA Patriot Awards were presented by TSA Ohio Federal Security Director Donald Barker. Stevens, who was elected as sheriff in 2020 and took office in Jan. 2021, was among those who received the award for answering the call of duty and helping to keep America safe since the tragic attacks of Sept. 11, 2001.

Stevens was presented with a plaque from Barker with the inscription, “In honor and appreciation of your unwavering courage and devotion to our community, state, and country.” Stevens also received commendation letters from the Ohio Senate, the Ohio House of Representatives and a medal recognizing the prestigious honor.

Stevens said he was told that he was nominated for his dual roles in keeping the community safe since 9/11, first as Tiffin Police Chief and now as Seneca County Sheriff. Stevens has been vigilant in the training and preparedness required to maintain order and safety and peace for county residents.

“I was deeply honored and humbled to be presented the Patriot Award,” Stevens said. “I have had a lifetime of Public Service that began at age 17 when I joined the U.S. Army Infantry to serve this great country. That then led me into the 30+ years of Law Enforcement for the citizens of Tiffin and now Seneca County as a whole.

He said he is grateful for the opportunities provided to him.

“I will never forget my Oath of Office nor shy away from it. We are extremely blessed to live in Seneca County, and I want to recognize that I didn’t earn this award alone, it is only through the hard work and vigilance of ALL Law Enforcement officers in this county that we are afforded a relatively safe environment to live, work and play,” Stevens said.

Commissioner Mike Kerschner said the county is proud of Stevens and all local law enforcement personnel.

“Everyone remembers where they were on September 11th, 2001,” Kerschner said. “This is a special honor for Sheriff Stevens, as he has worked hard in multiple different ways to keep the community safe after those tragic attacks. We are honored that our sheriff has been given this recognition and we are grateful and proud of him and our sheriff’s office personnel who work hard daily to keep our community safe.”