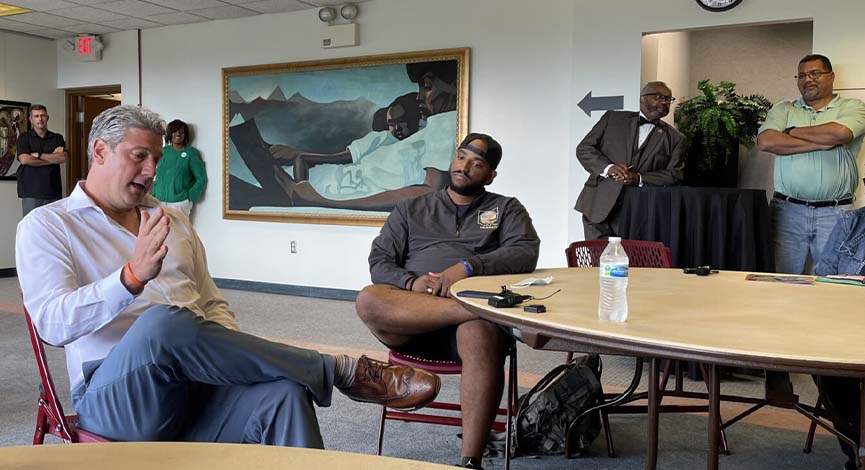 Two months from election day, recent polling indicates a close U.S. Senate race. Democrat Tim Ryan and Republican J.D. Vance are eager to spin those results to their advantage. But outside observers caution that poll and others might overstate Democrats’ position.

The Suffolk University/USA Today poll puts the race at “a pure toss up” with 47% of respondents favoring Ryan to Vance’s 46%. Another 6% percent remain undecided, and the poll has a 4.4% margin of error.

“J.D. Vance has yet to completely unify his Republican base while Tim Ryan has solidified support among Democrats and is competitive among independents,” Suffolk political research center director David Paleologos said in a press release. “Ryan is even winning a small slice of Republicans and those who say they want the upcoming election to change the direction that President Joe Biden is leading the nation.”

That looks like great news for Ryan in a state where the GOP has maintained a durable advantage in recent statewide races. Meanwhile, Vance’s campaign argues Ryan’s summer ad blitz only got him to even odds.

Kyle Kondik from Sabato’s Crystal Ball has seen the race trending in Ryan’s direction. They’ve moved their race forecast from Likely Republican to Leans Republican. But as the name implies, Kondik still thinks Vance has at least a slight advantage.

“At the end of the day I think Vance is favored in the race, but I feel like it’s become more competitive over the summer, as opposed to less.”

The New York Times’ Nate Cohn took a bit of wind out Democrats’ sails this week as well. He noted Democrats appear to be doing well in states like Ohio, North Carolina and Wisconsin — states where polling in recent cycles overestimated Democratic strength.

That track record is enough to give Kondik pause. He allowed it’s possible surveys are discounting Republicans again, but he cautioned, “just because a poll has been wrong before you can’t assume it will be right or wrong or what have you in the future.”

After a weekend trading barbs with Jennifer Lawrence, J.D. Vance kicked off the week in Cuyahoga County to help open a Republican party campaign office. After a slow summer, he’s beginning to ramp up — and insisting to wavering supporters that everything is under control.

In his keynote speech to full crowd , Vance acknowledges his campaign’s relative lack of TV ads. “My whole strategy, just to be direct with you and be clear, was to save our resources to when I think people are really paying attention. And that’s right now.” pic.twitter.com/qEmIKBetDV

This weekend, he gets a boost with the return of former President Donald Trump. It’s the second time this campaign season that Trump has visited to prop up his endorsed candidates. The former president’s backing was crucial for Vance’s primary win, and the campaign is likely hoping for a repeat.

Trump isn’t the only national figure to stop by to try to help shore up Vance’s bid and perhaps burnish his own political reputation as well: Late last month Florida Gov. Ron DeSantis campaigned with Vance outside of Youngstown as well.

Tim Ryan’s week started with a pair of events specifically geared to Black voters as well as a third about addressing the opioid crisis.

African Americans constitute about 12% of Ohio’s population. But because they favor Democrats so heavily, maximizing turnout in the Black community is a perennial concern for Democratic campaigns. More to the point, it’s table stakes for a party billing itself as concerned with equity to present an agenda to help systematically disadvantaged communities.

But in his ads, at least, Ryan focuses his appeal on workers generally and union members specifically. There’s little if any reference to race.

Speaking after a Black voters’ roundtable in Dayton, though, he argued his campaign is showing up in minority communities and making a concerted pitch to their needs and interests. He pointed to infrastructure dollars to remove lead in water pipes and local government funding in the American Rescue Plan.

Still there were murmurs of agreement when Dayton city councilman Chris Shaw cautioned Ryan on his campaign’s bid for independents and centrist Republicans. From the outset, Ryan has pitched himself as a Democrat a Republican could vote for. He has repeatedly distanced himself from his own party and President Biden in an attempt to build his own “exhausted majority” coalition.

Shaw actually doesn’t fault the strategy. He praised Ryan for going on the attack in a recent ad, and argued it’s smart for him hew to the center. The problem, he warned, is that sliver in the middle might not be enough come Election Day.

“He’s telling the truth, and I respect that, I respect the hell out of that,” Shaw said. “But I just want (an) understanding that it’s about motivating folks to get out and vote — don’t forget that piece of it.”

“Traditionally a lot of folks from minority communities have been left out in the cold in that way,” he said. “And I mean, that’s the fear, right?”