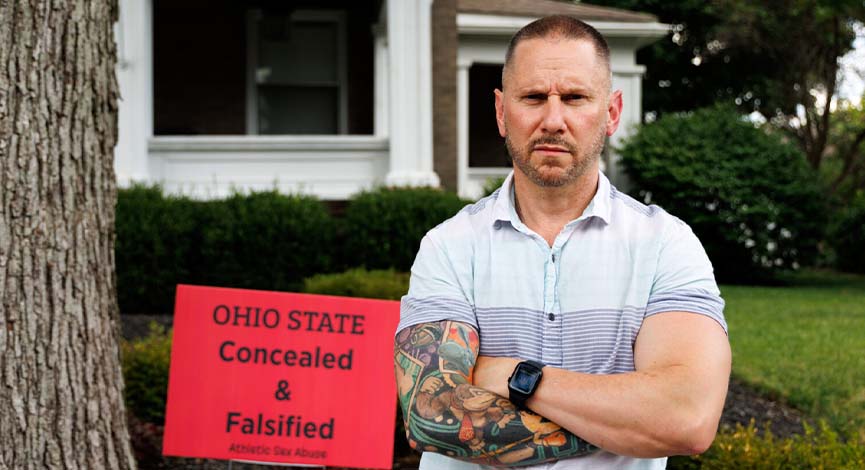 As Ohio State University came to publicly acknowledge that a physician it employed abused hundreds of students over two decades, it also waged several high-stakes legal and political fights against some of his victims to narrow their path to financial damages, an Ohio Capital Journal investigation has found.

In state and federal courtrooms and behind the scenes of the Statehouse, OSU and the victims have clashed, with millions of dollars on the line. While the university has settled with 296 people who sued the university for more than $60 million, another 236 continue to press on with 10 lawsuits now pending in the 6th Circuit Court of Appeals, according to a university count.

Dead center in the fray is Stephen Snyder-Hill, one of Dr. Richard Strauss’ final known victims and now a lead plaintiff in one of the surviving lawsuits. Between a near-encyclopedic knowledge of four decades of the Strauss-OSU story and a hard drive’s worth of chronologically organized documents to back him up, he’s perhaps the most dogged crusader pressing to hold Ohio State accountable.

He says he’s not in it for the money, but he wants to force OSU to come to terms with its role in the story, and to ensure it can never happen again.

“They only understand money,” he said, relaying advice from his lawyers. “So if you punish them in something they understand, that’s when they’ll make it count that they’re not going to let it happen again.”

Snyder-Hill filed a written complaint the next day, but Ted Grace, then the head of student health services, indicated that Strauss denied the allegations and the university sided with its doctor. Snyder-Hill agreed to drop his complaint if Grace told him, in writing, that Strauss hadn’t been the subject of any prior complaints of abuse. Grace, a physician, signed a letter to that effect, now some of the clearest evidence of the university’s enabling role.

The university’s investigation shows not only that Strauss had been abusing students for decades, but another student filed a complaint with the assistant director of student health services just two days before Snyder-Hill’s visit.

After OSU conducted what investigators later called a “very limited investigation” of Strauss’ complaint history and removed him from his physician roles in 1996, it allowed him to voluntarily retire before opening a men’s clinic off campus where his abuse continued. He maintained “emeritus” status with the university until his death by suicide in 2005.

The issue was revived in early 2018 and more fully unearthed via the release of the university’s investigation in 2019. But interviews, court records, and documents obtained in public records requests show OSU’s fight with some of the victims of Strauss’ abuse continues, albeit usually out of the public eye. Its frontiers include: 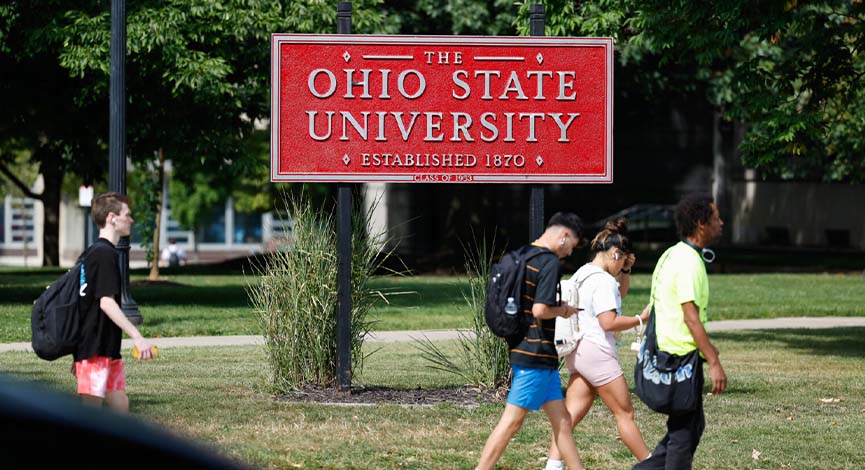 On the campus of The Ohio State University, Sept. 2, 2022 in Columbus, Ohio. (Photo by Graham Stokes for the Ohio Capital Journal)

Ohio State’s first public acknowledgement about “allegations of sexual misconduct” against Strauss came on April 5, 2018 when it announced it would bring in an outside investigator. The first lawsuits were filed about three months later.

The lawsuits alleged Title IX violations against OSU for repeatedly mishandling complaints about Strauss’ behavior, which included rape, sexual abuse like fondling students’ genitals during clinical visits, and deviant behavior like taking extended showers with athletes in the locker room. However, this type of legal claim bears a statute of limitations requiring plaintiffs to file any civil suit within two years of the abuse.

Snyder-Hill sued the university in the summer of 2018, eventually becoming the lead plaintiff of what is now 83 others claiming they’re victims of Strauss’ abuse as enabled by a university that covered up for a predator.

His case was dismissed in district court by a judge who signaled sympathy but said the law is clear that the two-year statute of limitations has passed. Attorneys for Snyder-Hill have since adopted a legal theory of fraudulent concealment — essentially, the clock on the statute of limitations shouldn’t have begun ticking because of the university’s role covering up the scope of Strauss’ behavior. They argue that two-year limitation should have only begun when the university disclosed the full scope of the scandal.

Otherwise, as plaintiffs’ lawyers argued to the 6th Circuit Court of Appeals, the law would reward Ohio State for its effectiveness in covering up Strauss’ conduct.

The university’s settlement program states its average payment to survivors is not to exceed about $252,000. This pales in comparison to eerily similar scandals at Michigan State University, University of Southern California, and the University of Michigan. At those schools — large universities whose employees abused hundreds of students under guise of medical care — the victims each received an average settlement of between $467,000 and $1.5 million.

Johnson emphasized that a majority of plaintiffs have settled, and that all male students who filed lawsuits have been offered the opportunity to settle. He also cited a statement included in a news release announcing some of the settlements.

“After extensive negotiations, we were able to reach a settlement on behalf of our clients,” said attorney Rick Schulte, lead negotiator for the plaintiffs that took the settlement. “The bravery of our clients is humbling. We are pleased that Ohio State stepped forward and did the right thing. This settlement will help our clients move forward with the healing process.”

The settlement agreement notes it is not an admission of guilt from Ohio State. It allows the victims to publicly discuss their past experiences with Strauss as “part of the healing process” but forbids them from “any disparagement of Ohio State’s handling of this matter since March 2018.” 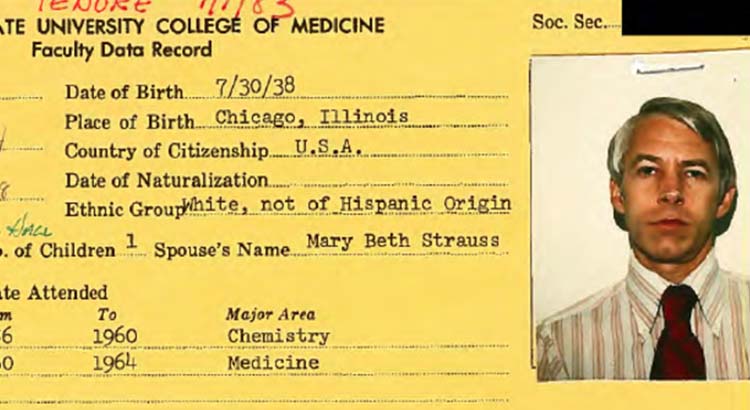 Building his case, Snyder-Hill wrote a public records request for all communications between himself and the university regarding his visit to Strauss and the aftermath on Dec. 13, 2018.

Seven days later, Ohio State’s legal department found and possessed the records in question, court records show. Despite a legal duty to turn them over, OSU withheld them for 155 days, claiming it did so to protect Snyder-Hill and other victims from “unnecessary retraumatization.”

Under Ohio law, any document kept by a public office like a university is a public record, unless it meets one of about 40 exceptions (which do not include “retraumatization”). Those records must be turned over within a reasonable period.

Snyder-Hill filed a lawsuit in April 2019 in the Ohio Court of Claims, a special venue to handle public records cases.

During a court mediation that Snyder-Hill secretly recorded, OSU attorney Kirsten Fraser said Perkins Coie, as opposed to OSU, had the documents in question. Plus, she said OSU’s Office of Compliance and Integrity, which fielded the records request, “didn’t even get the documents back from Perkins Coie until close to the time the report was released.”

Johnson, OSU’s spokesman, declined to comment about the statement because the recording “violates the court’s expectation of confidentiality in mediation.”

The university eventually released the documents concurrently with its full investigation into Strauss in May 2019. Regardless, the court sided with Snyder-Hill after the fact and found OSU flouted state records laws.

“The gravamen of this and the other arguments appears to be that OSU knows better than a survivor when his interests would best be served by disclosure,” Clark wrote.

“OSU is obligated to comply with the requirements of the Public Records Act, and its preference for confidentiality, alone, cannot limit a requester’s access to otherwise public records.”

Snyder-Hill won a $25 judgment from the university. The check is still hanging on his wall at home.

“They knew what they were doing from the start,” Snyder-Hill said in an interview. “I would have had the full story right there.”

While Snyder-Hill’s Title IX lawsuit wormed through the court system, state lawmakers drafted and considered legislation that would waive Ohio’s statute of limitations for Strauss’ victims. This wouldn’t guarantee victory in court but would greatly improve their cases’ chance of making it to a trial.

About 10 of Strauss’ victims came forward publicly at committee hearings in 2019, describing how Strauss abused them. They detailed aftershocks into adulthood manifesting in strained marriages, depression, trust problems, and substance abuse. Several grown men cried before a mostly male panel of lawmakers.

As the OCJ has previously reported, top House Republicans including then House Speaker Larry Householder and Majority Leader Bill Seitz have admitted they never planned to pass the legislation. They merely used the bill as an instrument to pressure OSU into offering a more generous settlement offer. Strauss’ victims were never told of the strategy. The bill died without ever being voted on.

OSU said in public it wouldn’t take a position on the legislation, given the ongoing litigation.

Behind the scenes, it registered two lobbyists on the bill. Records obtained by Snyder-Hill in another request show how OSU relied on a middleman to testify to lawmakers against the bill.

During legislative hearings, Kevin Shimp, a lobbyist with the Ohio Chamber of Commerce, testified against the legislation on behalf of the Ohio Alliance for Civil Justice. Beforehand, he emailed OSU lobbyist Brian Perera that he understood “OSU is willing to assist me” drafting the testimony and asked if Perera had anything to add.

“I will have materials for you next week,” Perera said.

“The passage of HB 249 would undermine the important goals of statutes of limitation by reviving certain claims that were not filed in civil or criminal court within the timeframe required by statute,” Shimp said to lawmakers. “By reviving the claim, the bill would allow claims that were once barred by the statute of limitation to be brought forward again.”

Ohio State, its spokesman said, did not want to take a public position on the legislation that would “impede the mediation’s success.”

Snyder-Hill attracted national fame and controversy long before he prosecuted public battles with one of the most iconic brands in American collegiate sports.

He enlisted in the Army in 1988, eventually rising to become a Major. As a gay man, he remained closeted for much of his service, before becoming a national advocate against the U.S. military’s “don’t ask don’t tell” policy that prohibited openly gay people from serving.

During a 2012 GOP presidential debate, Snyder-Hill, speaking remotely from Iraq while on a deployment, asked the candidates whether they plan to “circumvent” the newfound openness to openly gay soldiers. He was booed — a segment that made national news and was featured in HBO’s series The Newsroom.

He gave a TEDx Talk about the event in 2015, at Ohio State of all places. The title: “Trust the Power of Your Voice.”

He talks fast. He figures he has filed at least 30 public records requests with OSU and the Ohio General Assembly about the scandal. He acknowledged his own zeal in a roughly three-hour interview, using self-descriptors including “psychotic” and “obsessed.”

“I know how I appear when I send an email and it’s like, a tirade of shit,” he said. “It’s a determination to know the truth. It has consumed me.”

There are plenty of detractors. He said he gets hate mail, calling him a disgrace to veterans or this or that anti-gay slur. He knows he poked the bear of a beloved university and athletics franchise.

But he wants people to see the world through his eyes: He was wronged in 1995 by Strauss. Ohio State’s top doctor lied to him about it. Now, that same university who’s admitting to everything then is still fighting with him now.

When asked what victory would look like, he said it’s about truth and accountability.

“I want them to be held accountable for everything they did,” he said. “And what does that look like? For me, it’s having to admit it. Having to own up to it.”