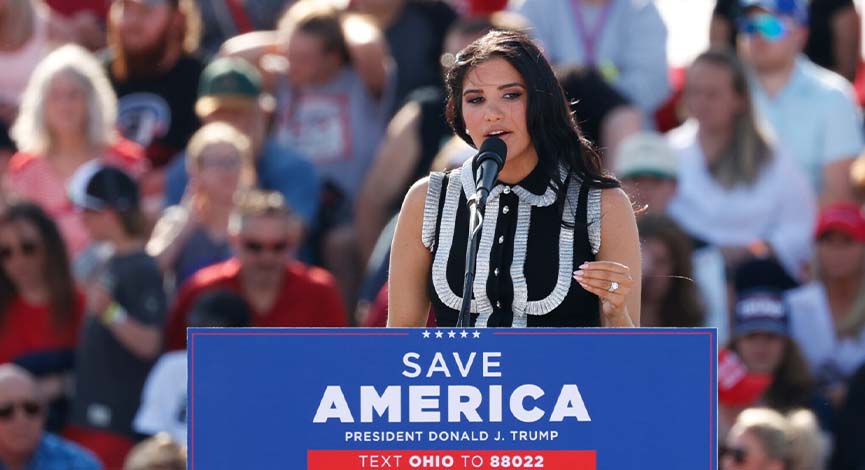 Madison Gesiotto Gilbert, who is running as a Republican for election to the U.S. House to represent Ohio’s 13th Congressional District, speaks at the Save America Rally featuring former President Donald J. Trump, April 23, 2022, at the Delaware County Fairgrounds, Delaware, Ohio. (Photo by Graham Stokes for the Ohio Capital Journal.)
ShareTweet

Federal law requires office holders, candidates and even certain staffers to disclose details about their finances in order to serve. For candidates those requirements kick in once they’ve raised $5,000 and no later than May.

Madison Gesiotto Gilbert and her husband Marcus Gilbert made most of their money in the past two years through passive income. Financial disclosures group investments in buckets, so the reported amounts are inexact.

The disclosure itself is a scanned, and often illegible, document. It appears, though, that that the couple hold numerous investments in municipal bonds and treasuries, both of which generally offer tax-free income. Their most substantial holdings are a handful of exchange traded index funds and an investment property. The report lists each of these assets as worth at least half a million dollars.

Madison is an attorney but her income from legal work is hazy. Under earned income, she discloses earning $24,000 last year as a contributor to conservative media outlet, The First. She lists her legal services under a separate section covering any compensation of more than $5,000.

Gilbert describes herself as a small business owner and points to Seven Hills golf course. In an interview with Spectrum News, she described picking up shifts tending bar when they had trouble hiring.

I hear long-awaited sale of Seven Hills Country Club is done or near done. New owner will be Dr. James Gesiotto, DDS and the father of Fox News contributor and former Miss Ohio Madison Gesiotto, who is married to former NFL lineman Marcus Gilbert.

Past news reports suggested her father purchased the course and the disclosure lists her corporate position as a member of Seven Hills Country Club, LLC. The disclosure describes Seven Hills Country Club, LLC as an asset worth $250,000-$500,000 that produced no income in the past two years. The PPP loan the company took out last year lists the couple’s home address. But whether Madison and Marcus own the golf course outright or with other family members is unclear.

Gilbert reports holding several corporate positions but none of them produced income.

A former Miss Ohio, she lists a seemingly defunct pageant consultancy called Pageant Precision. Its website is no longer up and social media accounts for the company haven’t posted updates since early 2017.

The couple also heads up The Gesiotto Gilbert Foundation, which describes itself as “dedicated to cultivating the benevolent power of communities across Ohio and strengthening the state through innovative community initiatives, programs and services.” The foundation formed in October last year, less than a week before Gilbert first declared her candidacy. It has no website, and state business filings list Pageant Precision as its mailing address.

Gilbert’s disclosure lists outstanding student loan debt of $100,000-$250,000. In an interview earlier this month with Fox News, Gilbert called President Biden’s decision to forgive a portion of student loan debt “pretty frustrating to see.” She voiced sympathy for borrowers upset about “flaws” in the system, but insisted “$500 billion is just something we cannot afford.”

While the Gilberts are easily millionaires (according to overthecap.com Marcus earned north of $32 million in his ten-year career in the NFL) Madison may be eligible to have some of her student debt canceled. Because their income over the past two years appears to come primarily from investment proceeds, it’s conceivable they could come in below the $250,000 filing jointly.

Gilbert’s campaign did not respond to an interview request for this story.