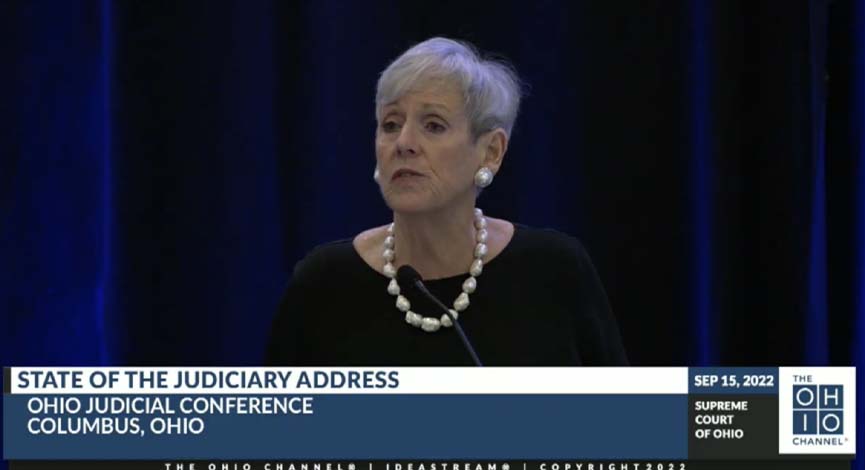 Ohio Supreme Court Chief Justice Maureen O’Connor said she plans to become a part of the anti-gerrymandering effort once she leaves office at the end of the year.

In committing to her next steps after the her term-limited time as the head of the state’s highest court, she also acknowledge the failures that happened in the year since redistricting began in the state. She said voters learned that the constitutional amendment a vast majority voted for to reform the process and stop gerrymandering simply didn’t work.

“It did not prevent gerrymandering and it did not prevent the use in the upcoming election on Nov. 8 of unconstitutional maps that were drawn both for the congressional and general assembly districts,” O’Connor said Thursday as she delivered the “State of the Judiciary” at the Ohio Judicial Conference.

The bottom line was that Article 11, the constitutional amendment meant to prohibit undue partisanship in the redistricting process, “has no discernible or enforceable effect to curb gerrymandering in Ohio,” she said.

The Ohio Supreme Court sent back five versions of the legislative district maps as unconstitutional, and two versions of the congressional map with similar partisan favoritism concerns.

O’Connor was a part of all seven majority opinions in the cases. In fact, she received criticism from members of the Ohio Redistricting Commission about her decision to side with those ruling the maps unconstitutional. Ohio elections chief, Secretary of State Frank LaRose, also a member of the commission, suggested he approved of removing her as chief justice over the decisions.

A lack of judiciary backstop in redistricting has become a common criticism of how the work played out, starting last August. Now that discussions about a new ballot initiative have begun, giving the judiciary power like it has in other states to appoint certain people to draw the maps or even have the justices draw them on their own is part of that discussion.

“Let’s try having ordinary, sensible people who are not driven by politics, but rather by what’s fair: fair representation and justice,” O’Connor said on Thursday.

She put on a skeptical tone when bringing up the concept of the legislature working to get an amendment on the ballot.

“What do you think the chances of that are?”

But when asked about her next steps, she said one thing she hopes to be involved in after her term ends on December 31 is that movement toward a new anti-gerrymandering model in Ohio, and representative redistricting.

Speaking of her two decades in office, she praised the progress the Ohio Supreme Court and other members of the judicial branch have made in modernizing the technology of the court. Better technology allows better case management, and even a reduction in failure-to-appear cases, she said.

With new technology comes the promise of new data to help the courts work better and create more balance. A frequent proponent of the Ohio Criminal Sentencing Commission, O’Connor said data analysis can be used to inform so many decisions and create a system that keeps track of cases from the time of arrest, to the pre-trial proceedings, community control and beyond.

“We don’t have data in any of those things I just mentioned that can be put into research and tell us what we’re doing, what the system’s doing, what our partners are doing, data at every stage,” O’Connor said.

“We must explain our relevance to the people of our state often, and it is the responsibility for each of us,” she said.

That knowledge feeds into the ability of the public to vote for judges on an informed level, and maintain that “coequal but independent” judicial branch.

“People who go to the polls vote in most of the races and then stop when it comes to the judges, in all courts, because they don’t know,” O’Connor said.

The chief justice promised “there is so much more we can do for the people of Ohio,” but said she also plans to take some comfort in “the sweetness of doing nothing” after her term ends.

“At least for a few months,” she said.