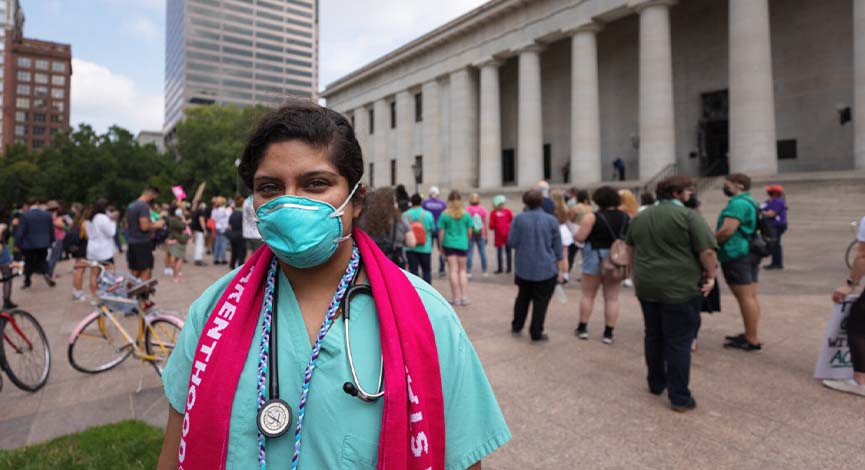 COLUMBUS, Ohio — Shreekari Tadepalli is a medical student at OSU. When asked how she wants to practice medicine she quickly answered “I want to be an abortion provider.” She joined supporters of safe and legal abortion at the Abortion Justice Day of Action rally at the Statehouse. (Photo by Graham Stokes for the Ohio Capital Journal)
ShareTweet

Students and in-training physicians say they are looking to other states for medical abortion education they need to do their jobs and finish their degrees. Medical schools, meanwhile, are doing what they can to link the students with that training.

Shreekari Tadepalli began her final year in medical school at Ohio State thinking of how she would specialize, as most medical student do in their last year.

A Michigan native, she came to Ohio State specifically to go to medical school. She plans to stay, because she wants to fight for her patients as an OB/GYN, and advocate for abortion care as a normal part of medical care.

“To me, medicine is like the ultimate form of advocacy, and I think physicians should be advocates for care,” Tadepalli told the OCJ.

When the pandemic hit, Tadepalli headed back home to live with her parents, but she looked for ways to help. She heard a private clinic in Detroit needed staff, and she had the skills she needed to be of service there. While helping staff the clinic, she talked to the OB/GYNs about why they chose their profession, helping bolster her desire to become one herself.

Tadepalli was upset, though unsurprised, when the U.S. Supreme Court overturned Roe v. Wade, sending the issue of abortion legality back to the states. Hours after the decision was made, she watched Ohio move forward with an abortion ban after six-weeks gestation, which had previously been tied up in court for years.

“I think there was a certain amount of frustration that we’ve allowed ourselves to get to this point, when every poll says a majority of Americans support (legalized abortion),” Tadepalli said.

A June poll from Suffolk University and the Cincinnati Enquirer showed 53% of Ohio voters supported abortion rights, and the Pew Research Center has consistently shown majorities of Ohioans as supporters of legal abortion.

In August, the ACLU announced their own survey of Ohio voters, showing an 82% support rate for abortion legality in some form.

A new set of complications arose for Tadepalli, in that she now had to figure out how to get training in abortion procedures and services after six-weeks, something that’s growing hard to find in a state where one clinic has already announced its closure due to regulations surrounding it.

“One of the hardest things right now is because so few of these laws are based in medical practice,” Tadepalli said, “it has implications beyond the level of elective abortions.” 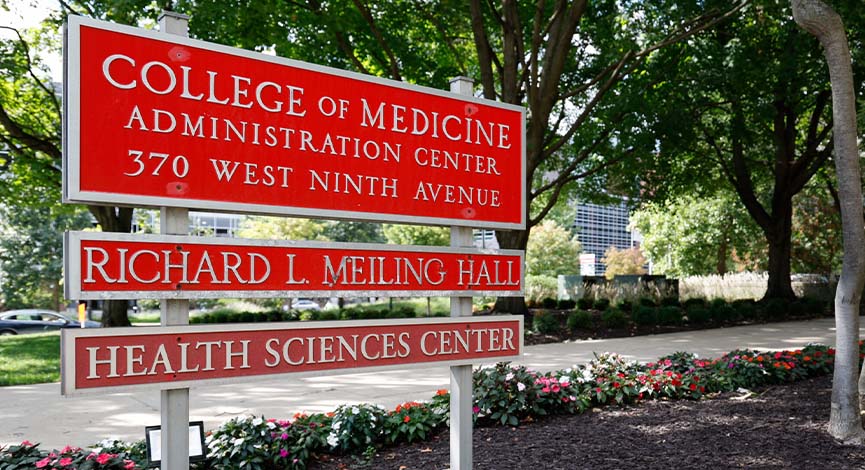 Ohio State said in a statement to the OCJ that they are working with professional organizations and medical groups as changes to training are reviewed nationwide.

“We intend to continue offering the full spectrum of training in reproductive care for those residents who do not opt out of the requirement,” Mary Fiorino, spokesperson for the Ohio State University Wexner Medical Center. “In order to ensure we are meeting national accreditation standards on this topic, we are exploring ways for our trainees to do that outside of the state of Ohio.”

Another of Ohio’s medical schools, Ohio University’s Heritage College of Osteopathic Medicine, also said they are keeping up with recommendations from medical groups and monitoring judicial and legislative changes in the state, but they still plan to train their students.

“We believe it is important to continue to offer training related to the full spectrum of women’s health care so that students have the knowledge and skills they need to practice medicine and provide the best medical care possible in any community they choose to live and work,” Lisa Forster,  HCOM’s chief communication officer, said in a statement.

Tadepalli also has residencies to consider, and while she wants to stay in Ohio, she said the questions she’s asking medical schools have changed somewhat.

“If you’re in a state like Ohio, what is your guarantee that I can be the full physician that I should be?”

Medical resident Alexandra Stiles is wondering the same thing as she reaches her last year of training before becoming a OB/GYN generalist.

A Virginia native who was a first-generation college student, Stiles said she wants to be able to develop medical relationships with her patients, from their first child to any other reproductive needs on down the line.

That includes abortion care, which she emphasizes means more than just pregnancy termination, but the fetal anomalies that are fatal, or when a pregnant person’s water breaks, meaning the fetus won’t be able to make it to term.

“People don’t really see that side of things,” Stiles said. “That in putting up that barrier to access, you’re not just preventing a woman from getting an abortion, you’re preventing us from caring for those people.”

The fact that legislation is being used to regulate medical care, specifically for those that can become pregnant, makes Stiles want to “use my advocacy hat” for her patients, even if it means looking to other states and nonprofits for help.

She worried recruitment to Ohio’s medical schools will be reduced without the ability to learn certain procedures, which would be a shame because she came to Ohio specifically because of the reputation Ohio State’s medical school had.

In the future, Stiles hopes those making laws and deciding on the health care landscape in the state defer to the experts, the patients, and the doctors who work with them.

“I’m not going to NASA and telling them how to fly their astronauts, and NASA wouldn’t come to me and tell me how to perform a hysterectomy,” Stiles said.

Tadepalli sees politics as a “zero-sum game,” but advocacy for her patients as the way to effect change in their lives.

“One of the things that helps me stay sane is reminding myself that most Americans are not behind a total ban on all abortions,” Tadepalli said. “I think it reminds me that there is some common ground on such a charged issue.”