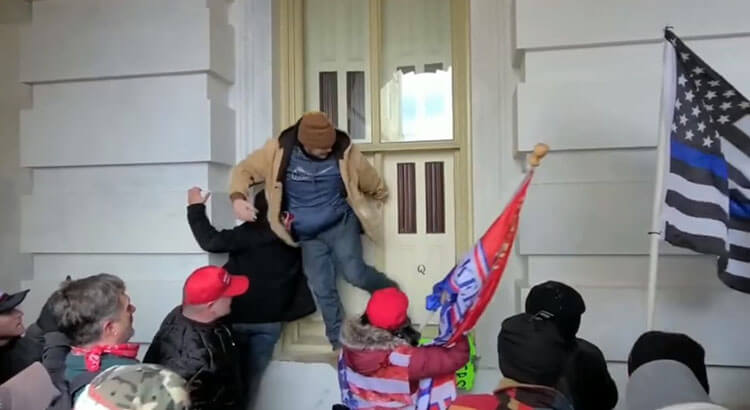 When politicians lie, it destroys lives — often the lives of their biggest supporters.

Take Christine Priola of Willoughby, who joined the front lines of the Jan. 6 riot, climbed the steps, and entered the Capitol Building soon after the first rioters overcame law enforcement officers guarding the entrance, and then invaded the U.S. Senate chamber, according to federal law enforcement.

Priola resigned her post as an occupational therapist with the Cleveland Metropolitan School District the day after her image was famously captured at the riot that left at least five people dead.

Priola was arrested in Ohio on Jan. 14, 2021. She pleaded guilty to felony charges in July and is to be sentenced on Oct. 28. She likely faces at least a year in prison, with a statutory maximum of 20 years and potential financial penalties.

Yes, Priola is responsible for her own insurrection-supporting actions and is now suffering the consequences of them.

But we can not forget that she undertook those actions because politicians and members of right-wing media outlets she trusted refused to be honest with her.

Instead of telling her and the rest of their supporters the truth that Donald Trump lost the 2020 Election fair and square, prominent Republicans such as Ohio’s Jim Jordan stoked debunked conspiracy theories, mistrust, and paranoia. With lies, they instigated an insurrection to overturn a free and fair election.

Since Jan. 6, 2021, more than 850 individuals have been arrested in nearly all 50 states for crimes related to the breach of the U.S. Capitol, including over 260 individuals charged with assaulting or impeding law enforcement. Capitol police officers were beaten and sprayed with chemicals during the mayhem, and the rampage caused more than $1.4 million in damages.

While Priola’s career in education is over as she soon likely heads off for a stint in federal prison, many of the politicians who provoked the insurrection with lies will cruise to reelection in gerrymandered districts and continue to enjoy very comfortable, privileged lives with high salaries and platinum health care benefits paid for by taxpayers.

In short, the politicians will be fine, but their supporters who mistakenly thought they could trust them will not.

The Jan. 6 insurrection is one thing, but over the past two and a half years we’ve seen large-scale lying by politicians have much deadlier consequences.

Looking over the history of civilizations, it’s clear why so many societies, over thousands of years, abhor lying.

Besides being immoral and anti-social, lying has incredibly destructive, dangerous and deadly consequences.

It destroys the foundations civilization is built upon, and lying politicians destroy lives.